Iran Daily, Jan 6: Rouhani Makes a Play for Support With Public Votes — But on Which Issues? 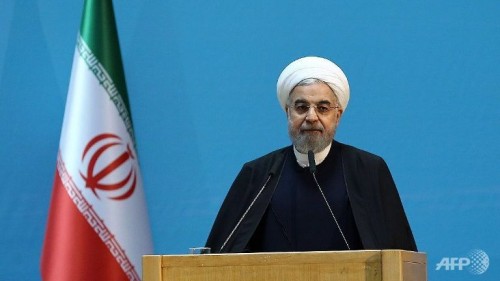 Iranians are considering the significance of President Rouhani’s declaration on Sunday, amid his escalating fight with hardliners, that Iran should have direct referenda on key issues.

Rouhani’s main focus at the conference in Tehran was on the state of the economy, with a loud call for foreign investment (see separate entry). However, he widened his talk when he declared, “It will be good to, after 36 years, even for once, or even every 10 years if we implement this principle of the Constitution, and put important economic, social and cultural issues to a direct referendum instead of to the Parliament.”

The President did not tie his call to a specific issue, leaving observers free to speculate about the options. Some foresee Rouhani taking the outcome of long-running nuclear talks with the 5+1 Powers to the public. Others note the fight over economic policy, including the President’s recent criticism over “monopolies”, seen by some as a challenge to the Revolutionary Guards’ expanded involvement in the Iranian economy.

The general scenario is that Rouhani is trying to counter hard-line influence in the Parliament, State media, and key bodies such as the Guardian Council. Ahead of the key vote for leadership of the Assembly of Experts, hardliners have been attacking Rouhani’s mentor and a likely candidate, former President Hashemi Rafsanjani, and they are also preparing for Parliamentary elections in 2016.

The president is simply trying to keep the people’s minds preoccupied with new ideas. In reality it is not easy at all to organize a referendum.

Even before its 2015/2016 budget is considered by Parliament, the Rouhani Government has been warned of a $7 billion shortfall in its provision for health care.

Parliament’s Health Commission issued the warning, due in large part to the Government’s pursuit of universal health insurance.

Mohammad Hossein Ghorbani, the head of the Health Commission, said proposals to address the deficit were tabled in Parliament on Sunday.

An estimated 12 million to 13 million Iranians do not have any form of health insurance. The Government has said it will cover 5 million to 6 million in the first phase of its program, but it has not announced the source of the funding.

Facing public pressure for the trial of opposition leaders Mir Hossein Mousavi and Mehdi Karroubi — held under strict house arrest since February 2011 — Iran’s Prosecutor General has said they will be tried “as soon as the necessary conditions are set”.

Gholam Hossein Mohseni Ejei did not elaborate on the “conditions” and did not announce a date for a hearing.

Mousavi and Karroubi, candidates in the disputed 2009 Presidential election, and Mousavi’s wife Zahra Rahnavard were detained amid regime fears of renewed mass protests.

Prominent MP Ali Motahari and senior clerics have called for a trial to end the indefinite limbo of the house arrests. However, the Supreme Leader has rejected the court process, saying the trio would have a harsher fate — perhaps even the death penalty — if they went through the courts.

Basij Head: US Embassy in Iraq is “Command Center for Islamic State”

Mohammad Reza Naqdi, the head of the Basij militia, has added a dramatic claim to the regime’s propaganda that the US — which is bombing the Islamic State in Iraq and Syria — is actually working with the jihadists.

Naqdi told militia members on Monday that the US embassy in Baghdad is the “command center” for the Islamic State.

“The US directly supports the [Islamic State] in Iraq and the US planes drop the needed aid and weapons for [it],” he asserted.