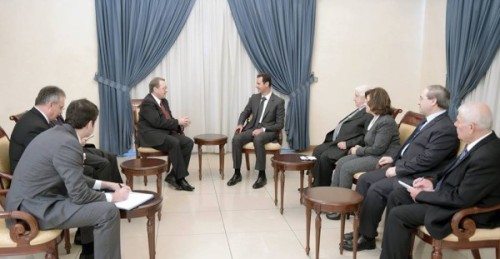 The headline from Syria’s State news agency SANA on Sunday is “PM Expresses to Russian Ambassador Appreciation of Moscow’s Support“.

However, that unsurprising statement hides an important claim from a Russian “diplomatic source” — did Russia, far from extending support, turn down a request from the Assad regime for a $3 billion line of credit?

The unnamed diplomatic source, cited by Al-Monitor, refers to a trip by Syrian officials to Moscow in the second half of October. The source maintains:

The demands of the Syrian economic delegation to Moscow included Russian loans, or a so-called line of credit of about $3 billion. However, the Russian side failed to meet this demand.

Al-Monitor speculates that Russia, with a trip by Deputy Foreign Minister Mikhail Bogdanov earlier this month to see President Assad, is pursuing the regimes agreement to renewed negotiations with the opposition — not just the nominal opposition inside Syria, but with groups based outside the country. The article does not indicate if Moscow broached the fundamental idea of the opposition that Assad step aside in a political transition.

Away from the political speculation, the established reality is that the Assad regime is seeking billions in economic assistance from its closest allies to cope with the winter and fuel and food shortages. Last week, Prime Minister al-Halqi asked Iran for another line of credit — mainly for oil products — to supplement a $3.6 billion line that will be exhausted in 2015.

This morning’s SANA story makes no reference to the crisis. Instead, it puts out the vague statement:

Al-Halqi….took the opportunity of the meeting to invite Russian companies and businessmen to establish new investment, development and services projects in Syria.

Such projects, he noted, are important especially when it comes to the post-crisis reconstruction stage, which the Premier stressed “will involve only the Syrians and national companies and the real friends of the Syrian people”.

Assad Hosts Iran’s Speaker of Parliament Larijani: “We Will Eradicate Terrorism and Extremism”

Hosting Iranian Speaker of Parliament Ali Larijani on Sunday, President Assad has declared “Srians’ resolve to eradicate terrorism and extremist thoughts that are menacing the region and the world”.

In statements released by State news agency SANA, Assad also spoke of a strategy of “national reconciliations” to end the 45-month conflict.

According to SANA, Larijani — accompanied by Deputy Foreign Minister Wael al-Halqi — “made it clear that the people of Iran will not hesitate to provide all forms of support to Syria to the effect of further consolidating the requirements of this steadfastness and fighting terrorism and its backers”.

Claimed footage of retreating Syrian forces, from the Wadi ad-Deif base captured by insurgents last week, making it to the regime’s line in Morek in Hama Province: