Syria Daily, Jan 5: A New Leader for the Opposition Coalition — But Will There Be Negotiations With Assad Regime? 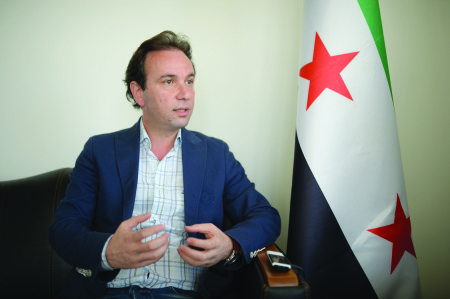 Syria’s opposition National Coalition has elected a new President in a weekend meeting in Istanbul.

Khaled Khoja, the Coalition’s ambassador to Turkey, narrowly outpolled Secretary-General Nasr al-Hariri to replace Hadi al-Bahra, who did not run for re-election.

The Coalition did not make a statement on the prospect of renewed negotiations with the Assad regime, dormant for 10 months. However, an Egyptian newspaper said Syrian opposition factions are expected to meet again in Cairo and endorse a “road map” for talks ahead of meetings later this month in Moscow.

The report said the road map will put forth a transitional government with full executive powers, in line with the Geneva communiqué of 2012.

The “sources in the opposition” appear to be representatives of “acceptable” domestic groups inside Syria rather than the Coalition. One of them, Munzer Khaddam of the National Coordination Body, said the road map has the support of a range of opposition factions.

The last talks in Geneva, between January and March 2014, did not even reach agreement on an agenda. The regime has rejected any consideration of the removal of President Assad from office.

Russia has pursued a series of discussions since November for a resumption of talks, including a meeting with President Assad and his Iranian ally and the hosting of members of the “acceptable” opposition — but not Coalition representatives — in Moscow.

A spokesperson for the Coalition said the group had begun to discuss the Russian proposal with a decision was expected Monday.

The National Coordiation Body said its conditions included the release of detainees as a confidence-building measure and recognition of the existence of opposition groups by addressing invitations to them that mention their political post.

Louay Hussein, a senior figure in the NCB, was detained in November. Another leader, Abdel-Aziz Khayyer, disappeared in 2012.

Jaish al-Islam Arrests Members of Insurgent Faction for “Filth of Corruption” in Douma, Northeast of Damascus

Jaish al-Islam, the largest faction in the Damascus suburb of Douma, has arrested members of another group, Jaish al-Umma, for alleged corruption.

Jaish al-Umma’s General Command said the group had dissolved after the campaign, titled “Cleansing the Country from the Filth of Corruption”: “An estimated 200-300 brothers turned themselves and their weapons in.”

A source close to East Ghouta’s insurgent Judiciary Council said that “there were in fact wanted individuals, and corrupt [people]” accused of theft, rape and assault, and that Jaish al-Umma had refused to hand them over to the judiciary for prosecution.

Residents of Douma, under a months-long siege by the Syrian military, have recently protested high prices and the hoarding of supplies by merchants.

Without referring to Syria’s crisis over supplies, especially of food and energy, State media says the two men discussed “the need for optimal investment in the available opportunities in various vital sectors to benefit both countries” and “to facilitate procedures and overcome obstacles hindering the development of economic cooperation”.

Syria is seeking a renewed line of credit, with Iran’s $3.6 billion line, arranged in July 2013, expiring this year.

According to Syrian news agency SANA, Qassemi — a former Oil Minister — said “Iran is committed to continue providing support and expertise to empower Syria on the economic level and bolster its steadfastness until victory is achieved”.

Insurgents continue to withstand the regime assault on Jobar in northeast Damascus:

The Syrian military has pursued a sustained bombardment and ground offensive for months against the area, seen as vital to the insurgent presence in the capital.

Insurgents claim a victory in fighting on a key front near Majbal Al-Breij, northeast of Aleppo (see map).

The fighters claim that they “liberated” the area, killed about 20 Syrian troops, and captured a tank.

The insurgents have been trying for months to prevent the regime’s cut-off of main routes to opposition-held east Aleppo — al-Breij is on a supply road southeast of Handarat, a key point on the highway to Syria’s largest city, and near the Sheikh Najjar industrial area.

Prime Minister Wael al-Halqi has held another meeting with a high-level Iranian representative, as Damascus continues to seek support for its troubled economy.

Al-Halqi hosted Rustam Qassemi, Tehran’s former Oil Minister and now Chairman of the Iranian-Syrian Economic Relations’ Development Committee, on Sunday. The Prime Minister “affirmed Sunday that trade and economic relations between Syria and Iran are witnessing tangible and growing progress which reflect both sides’ adherence to promote relations up to the level of strong political relations”, according to State media.

Syria is seeking an additional line of credit from Tehran, replacing a $3.6 billion line — mainly for food and energy — which expires this year. In the past month, al-Halqi has visited Tehran while the Iranian Speaker of Parliament, Ali Larijani, has had discussions in Damascus with President Assad.

Without further assistance, Damascus faces a crisis over oil and gas. Many of its fields have been captured by the Islamic State, and the Government has already sharply raised prices on subsidized energy supplies.

No details were given of the Sunday discussion. However, Qassemi’s background — before serving as Oil Minister in the Ahmadinejad Government, he headed the engineering and logistics branch of the Revolutionary Guards — points to talks on reconstruction, infrastructure, and energy.