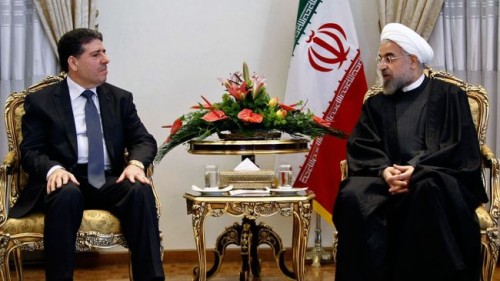 LATEST: A Christmas Message from the Protesters of Kafranbel

Analysis: Did Regime Kill Assad’s Brother-in-Law and Minister of Defense in July 2012 Bombing?

On Wednesday, as Syria’s Prime Minister Wael al-Halqi began talks in Tehran, we asked, “Will Tehran Keep Propping Up Syria’s Assad?” We noted that al-Halqi was probably asking for billions of dollars in assistance, as Iran’s $3.6 billion line of credit — arranged in July 2013 — would be exhausted in 2015. In particular, the Prime Minister would be seeking Iranian oil and food as Damascus faces crippling shortages.

Now Reuters add details from Syrian sources, “Iran deposited $500-$750 million in Syria’s Central Bank more than a year ago that has been used by the authorities to help stabilize the pound, according to two senior bankers.” However, the funds are depleted, with the Syrian pound losing another 10% of its value in the last two weeks.

An Aleppo member of the Syrian Chambers of Industry confirmed that the main item on the Prime Minister’s agenda in Tehran was larger quantities of oil products.

The Syrians also reinforce our assessment from Wednesday:

Iran’s ability to contribute more billions may be hindered by its own economic difficulties. With the failure to reach a comprehensive nuclear agreement, Tehran faces continuing sanctions and their effect on oil exports — down more than 40% since 2012 — and revenues. The halving of the global oil price, the baseline for the Government budget presented last week, has compounded the immediate problems with deficits, inflation, and falling production.

A leading member of the Damascus Chamber of Industry worries, “The 50 percent steep fall in oil prices will break Iran’s back, not just the level of support for Assad.”

If it had not been for Iranian support we could not have survived the crisis….

A Christmas Message from the Protesters of Kafranbel

The protestors of Kafranbel in northwest Syria send a Christmas message: 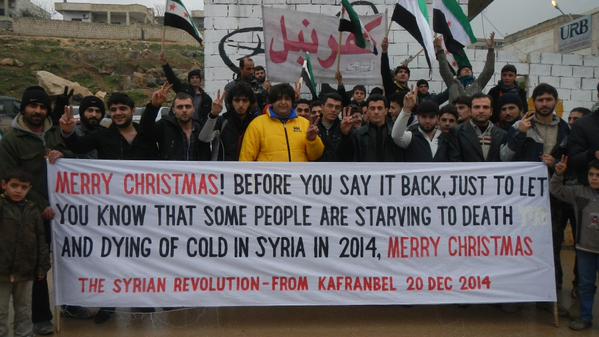 Activists in the Qalamoun region, bordering Lebanon, have denied that a prominent Free Syrian Army commander was executed by the Islamic State.

A pro-opposition site reported Thursday that Lieutenant Oraba Idriss of the al-Maghawir Brigade was killed after he refused to pledge allegiance to the jihadists. However, the activists said that Idriss is still alive although he had been abducted.

Idriss is the nephew of General Salim Idriss, the former head of the Free Syrian Army.

A dispute between the Islamist group Jabhat al-Nusra and an insurgent faction is continuing in Daraa Province in southern Syria.

Jabhat al-Nusra claims the Brigade of detaining three of its members and a female civilian last week. It has also accused the Brigade of declaring allegiance to the Islamic State, a charge denied by the faction.

The Islamist faction said that one of its leaders, Abu Maria al-Qahtani, had been wounded in the fighting but was expected to survive.

The activists said an alliance of insurgent groups in Daraa Province sent a force of “peacekeepers” to end the clashes, but they have failed so far. The Brigade called on residents province to “pull your sons out” of Jabhat al-Nusra.