Syria Special: US Tells Opposition “You Will Never Defeat Assad” — Here’s Why 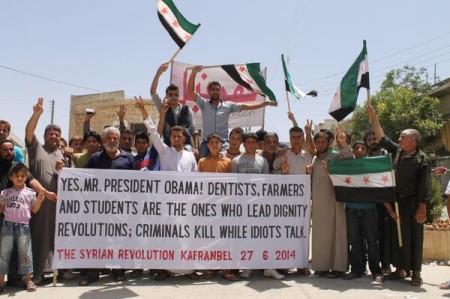 PHOTO: A message to Washington from Kafranbel in northwest Syria, June 2014

The US State Department has put out a firm message to the Syrian opposition: you will never defeat the Assad regime.

Brett McGurk, a senior official in the effort in Syria and Iraq against the Islamic State, told a Congressional committee on Wednesday, “We do not see a situation in which the rebels are able to remove [Assad]. It will have to be a diplomatic process.”

Officially, the Obama Administration is asking Congress to approve $500 million to train and equip a 5,000-strong force over the next year. However, the initiative is unlikely to begin before late February or early March.

Meanwhile, “moderate” insurgents have complained that the State Department has halted payments to fighters and the supply of arms. Reports also indicate that the CIA is limiting the covert delivery of weapons, as US-backed factions like the Syrian Revolutionary Front have lost in in-fighting with the Islamist faction Jabhat al-Nusra.

Instead, the US may be pursuing — quietly — a political strategy which once more aligns it with Russia, and thus indirectly with the Assad regime.

Russia and Syria are promoting a “peace” process in which talks would be held with an “acceptable” Syrian opposition, the first discussions since the failed Geneva II meetings of early 2014. That effort is alongside the initiative of UN envoy Steffan da Mistura, who is pushing for a “freeze” to fighting in Aleppo, Syria’s largest city which has been divided since July 2012.

Earlier this week, the strands came together in Turkey and Russia. In Moscow, Russian Foreign Minister Mikhail Bogdanov met with some of the “acceptable” Syrian opposition figures. In Turkey, da Mistura met with the Syrian National Coalition and the newly-formed Revolutionary Command Council, overseeing 72 insurgent factions.

Bogdanov added an intriguing piece to the diplomatic puzzle on Wednesday, as he met President Assad in Damascus. He said that, en route to Syria, he had met Coalition leaders in Turkey.

The US has not acknowledged any participation in the Turkish talks; however, just before they took place, US Secretary of State John Kerry and Russian Foreign Minister Sergei Lavrov met on the sidelines of an international conference in Switzerland.

The US and Russia also worked closely in autumn 2013 on a “political” process, taking attention away from a military response to the Assad regime’s chemical weapons attacks that killed up to 2,000 people near Damascus in August. The outcome of that process were two rounds of discussions in Geneva between January and March 2014: the regime and opposition could not even agree on an agenda for further negotiations.

McGurk, responding to questions from the House Foreign Relations Committee on Wednesday, reiterated that the train-and-equip program would take a year to train 5,000 insurgents. When legislators challenged the slow timetable — one said, “People are dying in Syria and the cavalry [isn’t] showing up till 2016 the way I understand it” — the State Department official downplayed the effort and shifted attention away from Assad:

[This is] one small element in an overall campaign. This is a multiyear campaign. Phase one is Iraq. What we’re doing in Syria right now is degrading ISIL’s [the Islamic State’s] capacity.