Syria Feature: Kerry Insists US is Assisting “Moderate” Insurgents in North — But Commanders Say Payments and Arms Have Been Stopped 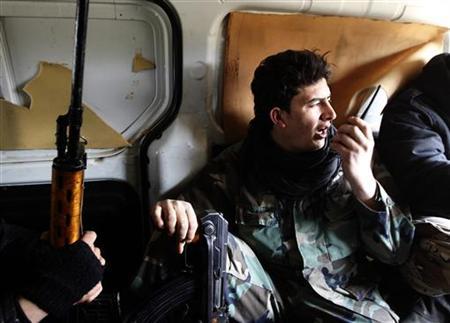 Amid criticism that Washington has not supported “moderate” insurgents in northwest Syria, Secretary of State John Kerry has indicated to a Senate committee that covert efforts are trying to support the fighters.

We are increasingly doing a number of things to make a difference, some of which are a part of the training effort that we want to get underway. More is being done…more than I can talk about in this meeting.

US-backed factions such as the Syrian Revolutionary Front — defeated in a battle with the Islamist group Jabhat al-Nusra last month — and the Harakat Hazm brigade have told media outlets such as Reuters and the Washington Post that they will be swept aside by “extremists” if supplies of American weapons are not stepped up.

Kerry said on Tuesday, “[The “moderate” factions] did not fare well in their battles and one or two of them folded into al-Nusra, which is disturbing.”

He pointed to insurgent advances — ironically, including Jabhat al-Nusra as well as “moderate” insurgents — elsewhere: “The opposition in the South is actually doing fairly well right now.”

However, even as Kerry was speaking, insurgent commanders were telling McClatchy News that the US has halted payments to 80% of their fighters and suspended arms deliveries.

A “top civilian coordinator for rebel forces” estimated that the cutoff affects 8,000 of an estimated 10,000 fighters in Idlib and Hama Provinces.

“In November we received all kinds of support including salaries. This month support stopped completely,” said Colonel Fares Bayyoush, leader of the Fursan al-Haqq Brigade in Kafranbel, about 20 miles south of Idlib city.

According to Bayyoush, a State Department representative said that non-lethal aid such as food and medical supplies would continue, but payments to individual fighters — about $150 per month — had been stopped.

Another commander said many of his fighters had asked him if they would receive their December salaries at the end of the month. He said he could only urge them to keep fighting:

I did my best to assure them. I told them, “We must continue our fighting against the regime and support will come back as we achieve new victories.”

A White House spokesman, Alistair Baskey, replied to McClatchy’s questions, “I won’t have anything for you on this.” He insisted, “We are standing up a train-and-assist program” — the $500 million program which would create a force of about 5,000 fighters in a year.