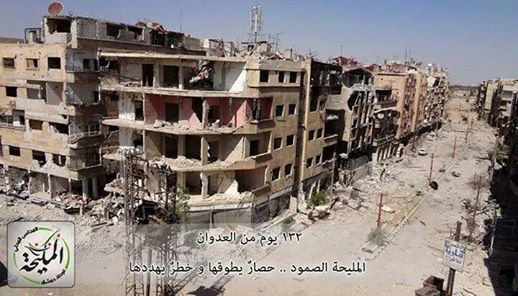 The Assad regime has renewed pressure on Mleiha, east of Damascus, only weeks after its long siege of the key town was broken.

Mleiha is considered the “gateway” to the East Ghouta area, much of which has been held by insurgents for years. Its capture would boost the Syrian military in attempts to clear the opposition from near the capital.

Insurgents broke through surrounding forces earlier this month (see feature), but the local council of Mleiha warned amid new airstrikes on Monday and Tuesday, “The regime forces now wrap around the perimeter of the town, restoring the blockade from the northern front to block off supplies from the mujahideen.”

The pro-regime newspaper al-Watan wrote, “The army targeted the bases of the gunmen in the gardens of northern Mleiha.” The opposition Local Coordination Committees claim “surface-to-surface missiles” are being fired.

The Supreme Military Council, facing pressure from both the Syrian military and the jihadist Islamic State, has warned, “Aleppo will fall if the international community does not step up support.”

The Council acknowledged recent gains by regime forces, with Hezbollah support, threatening to cut off insurgents in areas of Aleppo that they have held for more than two years.

The Council also writes that the Islamic State “is also making headway from the east”, amid reports that the jihadists have taken at least three towns in northern Aleppo Province.

The statement claims “increasingly sophisticated” barrel bombs, “wiping out entire neighborhoods” in “a strategy of forced displacement and collective punishment”, and devastation of infrastructure such as water, electricity, and hospitals.

Supporters of the Islamic State are claiming that the jihadists have taken the towns Akhtarin and Turkmanbareh in northern Aleppo Province, near the Turkish border.