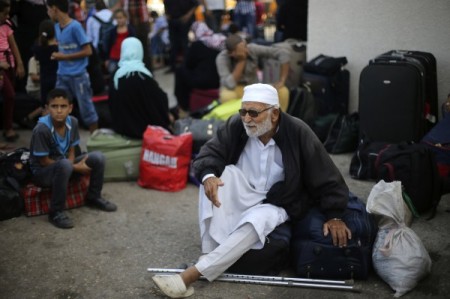 PHOTO: A Gazan man, hoping to cross into Egypt, waits at the Rafah border crossing on Tuesday (Ibrahim Abu Mustafa/Reuters)

UPDATE 1220 GMT: Italian journalist Simone Camilli, who worked for the Associated Press, Palestinian translator Ali Shehda Abu Afash, and three Gazan police have been killed by the detonation of ordnance left by fighting in Beit Lahia.

The police engineers were working to neutralize the ordnance when it exploded. Four people were seriously injured, including AP photographer Hatem Moussa.

UPDATE 0810 GMT: Foreign Minister Avigdor Lieberman has threatened leaders of Hamas and its military branch with death if they do not return the bodies of two Israeli soldiers slain in Gaza.

Lieberman said, “If the bodies aren’t returned, the terrorists from the other side will get the bodies of (Al-Qassam Brigades leader) Mohammed Deif, (Gazan Prime Minister) Ismail Haniyeh, and all of the Hamas leadership in the Gaza Strip.”

The Foreign Minister also added his voice to those of other Ministers promising an expanded war if a temporary ceasefire is not renewed: “(We must) take the initiative, even if it means a significant escalation. Finish the story in the shortest time possible.”

There was no apparent progress on Tuesday in indirect talks between Israel and Palestine to end the 36-day Gaza War.

Representatives of both sides told media that the “difficult and gruelling” discussions, mediated by Egypt, were far from agreement on issues such as the blockade of Gaza and the status of security forces in the territory.

A 72-hour ceasefire, arranged to provide space for the talks, ends at midnight (2100 GMT) Wednesday.

In addition to an end to the blockade, the Palestinians want the establishment of a seaport and airport, acknowledgement of fishing rights up to 12 miles off the coast, and release of long-time detainees from Israeli prisons. Israel has so far refused those conditions and insisted on the priority of demilitarization of Gaza.

A Palestianian delegate offered a small window of hope, saying Israel had offered “gestures” such as an increase in the number of trucks delivering goods across the Gaza-Israel border. He claimed West Jerusalem was also amenable to the transfer of funds by the Palestinian Authority to pay civil servants in Gaza — even though Israel’s Economy Minister Naftali Bennett objected earlier in the day that this would be “funding of terrorism”.

However, among Israeli Ministers, the talk was of renewed war if the temporary ceasefire lapsed without extension and progress in the talks. Defense Minister Moshe Ya’alon told naval forces:

I don’t know if we will reach an agreement by midnight on Wednesday. The shooting could restart….

We have to be alert and ready.

Intelligence Minister Yuval Steinitz asserted, “Either there will be a reasonable resolution of the situation in Gaza, or, if the fire resumes, we will have to consider….an expansion on the ground, overthrowing the Hamas authorities and the demilitarization of Gaza by ourselves.”