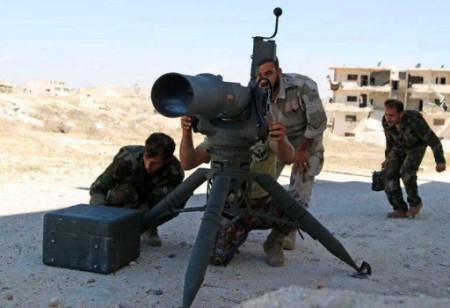 Tahrir Souri speaks with the commander of the 13th Division, Ahmad Al-Sa’oud, about the unit’s goals, operations, and support. The commander is cagey about who provided the TOW missiles, although he acknowledges training by the “Friends of Syria” — other reports have pointed to training of insurgents in Qatar and in Jordan.

What are the 13th Division’s future aims in the case the present struggle ends and Assad falls?

The 13th Division, belonging to the Free Syrian Army and armed opposition to the Assad regime, currently aims to bring down the Assad regime and form an inclusive, civilian state. Our future goals are to bring ourselves under the flag of a new Syrian state, one after Assad.

Who supports the 13th Divison financially and militarily? Do you expect this aid to continue?

The 13th Division is of the first armed opposition groups to receive American-made TOW missiles. Who was the intermediary in this deal that secured the TOW missiles? And based on what criteria were you trusted with these missiles?

The intermediary, and who has bestowed their trust upon us, are the Syrian people. The Syrian people who trust that we will face these weapons at the tyrannical Assad regime.

TOW missiles are pretty advanced, and most of your fighters are inexperienced civilians who volunteered to fight the Assad regime. Your fighters likely don’t have the training required to use these missiles effectively. Did you receive any training on how to use these weapons? If so, who provided it, and where?

Yes, we did need some training, the Friends of Syria provided the training and weapons.

(Tahrir Souri Note: It is well known among the residents of Idlib that Qatar is who provides the greatest aid to Division 13. It has armed and trained the group.)

You now have access to TOW missiles, and they’re rare among the opposition, has that aid forced you to adopt a certain “direction”?

We believe that the supporting nations’ aims and our aims,are one: to defeat the Assad regime and to bring the Syrian people out of the daily routine of death and destruction. We work with whoever benefits our battle plans.

If the TOW missiles are used as agreed upon with the supporting nations, do you expect to see an increase in the amount of aid, and perhaps the delivery of more advanced weapons? If you don’t continue to receive military aid, what’s your backup plan?

Yes, because day after day we are increasing our legitimacy and credibility on the ground. Wee will work with what we have if we don’t get more aid.

Considering you have TOW missiles, and considering the tight situation the rebels in the Eastern Ghouta (near Damascus, where the regime has been pursuing an offensive) are in, do you have plans to deliver the missiles there and thus aid the Free Syrian Army?

Right now, we have no way to deliver these missiles to the Eastern Ghouta. When a path opens up, we will absolutely lend our support to the rebels there.

We destroyed a regime T-72 in the Salam checkpoint South of Khan Sheikhoun. We were also part of the successful offensives to liberate Khan Al-Asal (and) the Rashideen neighbourhood,and the Research Sciences Centre,in Aleppo. In Idlib we participated in the liberation of Morek, Khan Sheikhoun, Heish, and Qumeis. We mustn’t forget the operation to liberate Baboulin and besiege the Wadi Al-Deif and Al-Hamdiyyeh military bases (in Idlib Province).

Political solutions to the crisis, the most recent of which was Geneva 2, have all failed. As a group belonging to the armed opposition, do you see the solution to the crisis a military solution? Do you have any plans or solutions to end the crisis in Syria?

The political solution is obviously the ideal solution to overcome the current crisis with the least number of deaths. The only plan, and our only aim, to solve the crisis is to remove Assad whether politically or militarily. That’s what is important, Assad be removed from power.

The withdrawal of the rebels from Old Homs, and the return of families back to their homes following the siege, was something that was coming sooner or later. Could the Homs scenario be repeated again in areas of your control, and you too be forced to withdraw in a similar fashion?

We, as of yet, don’t know the reason for the withdrawal of the rebels from Homs. However, the terrain in areas of our control, and our proximity to the Turkish border means the regime cannot encircle us. The Homs scenario will not be repeated, nor will we allow the regime the chance to attempt to do so.

As members of the armed opposition, what is your stance on those who have adopted a Qaida-esque ideology in Northern Syria? Did you contribute to limiting the expansion of these factions? What’s your official stance on the Islamic State of Iraq and the Levant (ISIS) and Jabhat Al-Nusra?

The Syrian revolution is experiencing chaos. I, personally, have been subject to kidnapping by ISIS, and have experience what many of the Syrian people have experienced because of them. We, as an armed opposition, will actively fight against the methods of these factions. The savage maltreatment of the Syrian people is something we will actively fight, we will fight ISIS till they’re removed from Northern Syria.

What’s your stance on the fragmented Kurdish factions? If the current regime collapses in Syria, will you both be a part of a national army?

We wish that the fragmented Kurdish factions return to the fabric of the Syrian revolution. We wish to work hand in hand with them to remove the Assad regime and build the Syria of the future. As for a national army, that’s something we are currently trying to do and be a part of.

What’s your opinion of the National Coalition for Syrian Revolutionary and Opposition Forces? Do you have any direct or indirect ties to them? Have you received any aid or funding from the Coalition or from businessmen who wish to remain anonymous?

AS: No, we haven’t received any aid from the Coalition. We did receive aid from the politician Ghassan ‘Aboud, once.

It is no secret that the National Coalition for Syrian Revolutionary and Opposition Forces is actively trying to procure European aid for the moderate Syrian opposition. Are you destined to receive some of that aid? If you are of the factions who will receive aid, what do you plan to do with it? Will this aid be wasted on impotent fronts, or will it be aid that could break the stalemate for in your favour?

Yes, we, the 13th Division, are destined to receive some of the aid the National Coalition for Syrian Revolutionary and Opposition Forces is supposed to receive soon. The aid will go to moderate opposition groups working on the ground. If this aid does get through to us, it will be used to benefit the Syrian people and bring down the regime. The aid will play a big role in shifting the balance in our favour.

Are you cooperating with the Syrian Interim Government and working to protect its offices and institutions within Syria?

If the Syrian Interim Government requests our support then we are prepared to defend its institutions and offices.

What is your stance, as an armed opposition group, on Israel?

We are for the return of all Syrian land occupied by Israel.