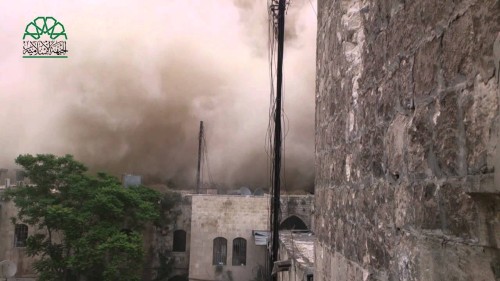 In recent months, insurgents have scored a series of dramatic successes with tunnel bombs against Syrian military targets.

Many of those operations have taken place in Aleppo near the Citadel. Earlier this month, an underground detonation hit the Carlton Citadel Hotel, used as a military headquarters, killing at least 50 troops and militia.

Martin Chulov of The Guardian of London speaks with Abu Assad, the commander of the tunnel bombers:

The most wanted man in Aleppo is feeling satisfied. Less than a week before, he had helped pack the last of 25 tonnes of explosives into a tunnel dug under a hotel and filled with Syrian troops.

“I was sitting in this room,” said Abu Assad, the rebel commander of Aleppo’s tunnel forces at another of the city’s frontlines. Smiling, he cupped his ear and added: “We heard the blast from here. It made us very happy.”

The explosion that destroyed the Carlton Citadel hotel in central Aleppo on 8 May rumbled well beyond the 9 miles (15km) between the bomb site and where the commander now sat recalling that day. Its destructive force sent shock waves through the well-dug-in Syrian military command in the city’s until-then impregnable west, and jolted to life an opposition whose war had been going badly.

The giant plumes of dirt and rubble that ballooned several hundred metres skyward as the hotel crumbled, killing 30-50 Syrian troops, have fast become one of the most jaw-dropping images of Syria’s civil war. In three years of aerial blitzes, scud missiles, chemical attacks and suicide bombs, little else had been captured so spectacularly and in real time.

“That was one of the best things about the operation,” said Assad. “The effect on morale was immediate. Ever since, the men have wanted to fight more than before. We have called this “Operation Aleppo Earthquake”.

He said the Carlton was being used as a barracks by Syrian police officers and by paramilitaries known as shabiha. Syrian officials angrily denounced the attack and the tunnel bombs used by the rebels, claiming they were killing and maiming indiscriminately and destroying the city’s soul and identity.

Flush with the success of the bomb, Assad chose to reveal himself to the Guardian as the leader of Aleppo’s tunnellers. He claimed not to be bothered by the fact that showing his face would give an already furious military even more reason to hunt him down. “I want them to be scared of me,” he said. “They need to know I am coming for them.”

The band of underground rebels, around 100-strong, are credited with doing more in less time than any other group in the 38-month war to take the fight to an ascendant military who, with the help of their backers, have clawed back lost towns and cities over the past year.

To make gains above ground, the tunnellers have burrowed beneath it at least nine times in the past six months alone. “Every strange noise, every shift in the ground, they will think it is us,” said Assad, adding that he was given the idea to start digging by a Palestinian who visited him in northern Syria last year.

“They said they had some success in Palestine, so I decided to try it. It wasn’t hard to find the explosives. I have personally supervised nine tunnels.”

Nor was it difficult to find volunteers prepared to dig through rock and stone under the ancient heart of Aleppo, the arches and millennia-old homes and mosques which separate regime and opposition forces in some places by only a few dozen metres.

Assad, a rural carpenter before the war, said the hotel tunnel was 107 metres long and took 33 days to build. Other subterranean digs have stretched for 860 metres and needed many months. “We have more surprises for them, God willing,” he said. “They are taking a little longer.”