Syria Special: There is No Chemical Weapons Conspiracy — Dissecting Hersh’s “Exclusive” on Insurgents Once More 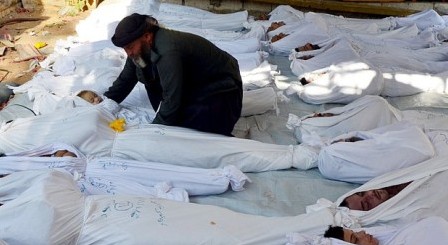 In December, Seymour Hersh — the investigative reporter who broke the My Lai story and reported on Watergate before Bob Woodward and Carl Bernstein picked up the trail — tried to pin last August’s chemical weapons near Damascus on insurgents in an article for the London Review of Books, “Whose Sarin?”

Joanna Paraszczuk and I dissected the piece:

1. Hersh’s allegations amounted to a red herring — a misleading claim about American “secret sensors” inside Syria — a deliberate or unwitting misunderstanding of casualty figures, and a dubious source, “a former senior intelligence official” who is possibly F. Michael Maloof, a staff member of the Department of Defense in the George W. Bush Administration.

2. To spin his conspiracy, Hersh ignored the bulk of evidence about the attacks, including the fact that several munitions were fired at multiple targets, the fact that insurgent-held areas were the sites affected, the nearby location of regime military bases, and the preparations for a regime ground offensive to follow the attacks.

This morning Hersh tries again, again given space by the London Review of Books, “The Red Line and the Rat Line“. Through a combination of “fact” and insinuation, he argues that the Obama Administration pulled back from military intervention after the attacks because it had discovered that insurgents — and Turkey — were likely to be responsible for a “false flag” operation to pull foreign powers into the Syrian conflict.

So has Hersh finally carried out genuine investigative reporting to prove his dramatic case?

1. Hersh quietly drops two of the four claims in his December article: that the US initially ignored the chemical weapons attacks and that a US “secret sensor” system inside Syria had not picked up any evidence of regime movement before the August 21 assault.

2. Now Hersh argues that the US, far from ignoring the attack, was very concerned about it — “Obama ordered the Pentagon to draw up targets for bombing”. However:

A. The Pentagon was concerned about the size of the operation.
B. The Obama Administration received an analysis from the British chemical warfare laboratory at Porton Down that “the gas used didn’t match the batches known to exist in the Syrian army’s chemical weapons arsenal”.

3. Hersh repeats his December claim that Jabhat al-Nusra was working with sarin in experiments for a chemical weapons attack.

4. The August 21 attack was “a covert action planned by Erdoğan’s people to push Obama over the red line”.

Hersh continues to ignore the detailed context, both from immediate witness reports and from months of enquiries. As we noted in Ddecember:

Reports on the day and subsequently indicated that 7-12 sites were attacked with chemical agents at the same time. In other words, whoever was responsible for the attacks launched multiple surface-to-surface rockets with chemical payloads against opposition-held towns in East Ghouta and one town in West Ghouta, near Damascus.

These attacks were immediately followed by very heavy conventional attacks….

In omitting these details from his argument, Hersh does not bother to ask who would have had the capability and the capacity to carry out such a widespread operation against multiple, opposition-held targets at the same time.

It is unclear whether or not Hersh actually saw the briefing. His summary of it is remarkably similar to put out by F. Michael Maloof, the former Department of Defense official who claimed in September that insurgents had carried out the August 21 attacks.

2. An unnamed “person with knowledge of (United Nations) activities” who asserts that insurgents were responsible for a March 2013 chemical weapons attack that killed 26 people in Khan al-Assal in Aleppo Province.

3. The analysis from the British chemical weapons facility — Hersh has not seen the report but claims:

The UK defence staff who relayed the Porton Down findings to the (US) joint chiefs were sending the Americans a message, “We’re being set up here.”

Let’s start with a fundamental: given Russia’s political and propaganda interest — starting almost immediately after the August 21 attacks and continuing to today — to pin the blame on insurgents and absolve Assad, “Russian military intelligence operatives” may not be objective and disinterested supplies of “evidence”.

So who are Hersh’s sources who reassure us of authenticity? Only one: the “former senior intelligence officer” who may be Maloof.

4. A lengthy description of US-Turkish tensions over supply of weapons to Syria’s insurgents

None of this offers any evidence of an attempt by Ankara to foster a chemical weapons attack by the opposition, but a source gives Hersh the killer lines:

We now know it was a covert action planned by Erdoğan’s people to push Obama over the red line.

They had to escalate to a gas attack in or near Damascus when the UN inspectors (inspecting previous attacks) were there. The deal was to do something spectacular.

Our senior military officers have been told by the DIA and other intelligence assets that the sarin was supplied through Turkey – that it could only have gotten there with Turkish support. The Turks also provided the training in producing the sarin and handling it.

And who is the source providing the smoking chemical gun?

So Hersh’s four points “proving” the insurgent attack likely come from a single source: the “former senior intelligence official” who may be the Bush Administration staffer pushing his own conspiracy theory since last September.

The only portions of Hersh’s story that are corroborated by multiple sources are that: 1) the US military was opposed to widespread intervention in Syria after August 21; 2) the US and Turkey disagreed over the scale of support for Syria’s insurgents.

These are important dimensions of the Syrian conflict — which is why we have written about them often.

Hersh could have done the same to investigate the complexities and tensions between foreign powers and the insurgency. He chose not to do so.

Instead, finding (or being found by) a source with an agenda — to discredit the Syrian insurgency, the former reporter of My Lai and Watergate ran with the line, adding flourishes if not facts. And, after his article was turned down by leading US newspapers, he found an esteemed London journal to publish the “exclusive”.

But does this really matter, as the August 21 attacks recede into the murk of “history”?

Last week, as regime forces fought insurgents in the Damascus suburb of Jobar, Syria’s Ambassador to the United Nations Bashar al-Jafari declared that he had “proof” of “terrorist” planning of chemical weapons attacks in the area.

Al-Jafari said, in letters to the UN Secretary-General and President of the Security Council, that the Assad regime had proof from “a phone call between terrorists monitored by the authorities”.

Of course, the record of the incriminating phone call never surfaced, just as the regime has never produced its supposedly-definitive evidence pinning the attacks of last March and last August on the insurgency.

But that’s not the point. If Al-Jafari and the regime can make people think that opposition fighters are responsible, then at least the shroud of uncertainty is cast over last August — there is no need to act because we will never know if the Assad regime killed its own civilians with chemical weapons rather than airstrikes, artillery, and barrel bombs. Perhaps the regime might even achieve more, pinning the stigma of the attacks on the opposition.

And then there are the objectives of the present. If the onus of blame remains on the insurgency, then the way is clear for regime to carry out further attacks, conventional or beyond: amid claims by activists that the Syrian military may have used chemicals in Jobar last week, al-Jafari said:

The purpose of this (insurgent) talk is to use toxic gas once again to accuse the government of the attack, just like what happened last year in Ghouta area in Damascus Countryside and in Aleppo before it

Any assault by Assad forces has immunity, because we are told that the insurgents may have done worse. Any talk of an alternative to the President is suspect, because that alternative is tainted.

Hersh is not actively supporting this regime campaign.

But his “reporting” serves that purpose: with its exaggeration, insinuation, and distortion, it gives the cloak of credibility to those who — whether or not they carried out the deadly mission of August 21 — do so every day with or without chemicals.

And it sets the obstacle that, just as the Obama Administration did nothing to halt those attacks last autumn, we cannot legitimately do so today.