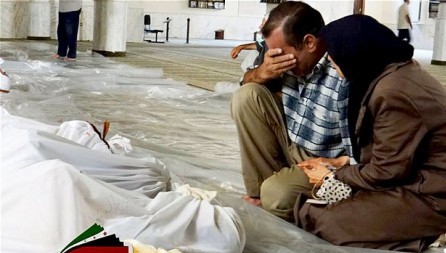 Set up by the questions, Hersh’s answers are an extension of the claimed Defense Intelligence Agency document — provided by his shadowy “former senior intelligence official” — innuendo, speculation, and exaggeration in his London Review of Books article.

But near the end of the interview, Amy Goodman finally put a challenge to Hersh:

AMY GOODMAN: Sy, on Sunday, the website EA WorldView published a piece headlined “There is No Chemical Weapons Conspiracy — Dissecting Hersh’s ‘Exclusive’ on Insurgents Once More.” The author, Scott Lucas, questioned the claim that rebels could have been responsible for the chemical weapons attack last August, given the range and scale of the operation. He wrote, quote, “Reports on the day and subsequently indicated that 7-12 sites were attacked with chemical agents at the same time. In other words, whoever was responsible for the attacks launched multiple surface-to-surface rockets with chemical payloads against opposition-held towns in East Ghouta and one town in West Ghouta, near Damascus. [The chemical] attacks were…followed by…heavy conventional attacks.” The author, Scott Lucas, says that you fail to ask questions about whether anyone, apart from the regime, would have the ability to carry out such an extensive operation. Sy?

SEYMOUR HERSH: [inaudible] first article on—we’re past that. We now know. Actually, The New York Times even ran a retraction, of sorts. You had a—it was like reading Pravda. But if you read the article carefully, The New York Times had run a series of articles after the event saying that the warheads in question that did the damage came from a Syrian army base, something like nine kilometers, six miles, away. And at that time, there were a number of analysts, a group from MIT [Massachusetts Institute of Technology], led by Ted Postol, who used to be a science adviser to the CNO, the chief of naval operations, clearly somebody with a great deal of background and no bias. He did a series of studies with his team that concluded that the warheads probably didn’t go more than one or two, at most, kilometers—two kilometers, 1.2 miles. And we now know from the U.N. report — a man named Ake Sellstrom, who ran the U.N. investigation, he’s concluded the same thing: These missiles that were fired were fired no more than a mile.

They were—one looks—just from the footage one saw, they were homemade. They didn’t fit any of the nomenclature of the known weapons. And don’t think we don’t have a very good picture of what the Syrians have in terms of warheads. They have a series of warheads that can deliver chemical weapons, and we know the dimensions of all of them. And none of these weapons fit that. And so, you have a U.N. report. You have this independent report saying they were—went no more than one or two kilometers. And so, I don’t know why we’re talking about multiple-launch rockets. These are homemade weapons. And it seems very clear to most observers—as I say, even to the U.N. team that did the final report—the U.N., because of whatever rules they have, wasn’t able to say that—who fired what. They could just say—they just could describe the weapons and never make a judgment. But I can tell you, I quote somebody from inside that investigation unit who was very clear that the weapons fired were homemade and were not Syrian army. This is asked and answered; these are arguments that go on. This is—I assume it’s a blog. I don’t know the—I don’t know the blog.

Let’s break this down:

Hersh’s conspiracy theory depends on the assertion that only the insurgents were close enough to the impact sites to have fired several rockets on multiple sites.

So he sets up the argument that The New York Times greatly overestimated the distances of the rockets — “nine kilometers, six miles, away”, while the reality is “no more than one or two, at most kilometers — 1.2 miles”.

It is true that The New York Times report — which drew from a Human Rights Watch summary of rockets with “a minimum range of 3.8 kilometers and a maximum range of 9.8 kilometers” — has been challenged through further examination of the munitions.

But Hersh is wrong that the revised, lower estimate is 2 kilometers at most. Richard Lloyd, whose work was significant in revising the original estimates, puts the range at 2-2.5 kilometers.

Why does that matter? Because it means that the rockets which struck Zamalka and Ein Tarma in East Ghouta could have come from regime positions taken in previous weeks in the area of Qaboun.

But what about the statement of United Nations inspector Ake Sellstrom that the range is “no more than a mile (1.2 kilometers)”?

Sellstrom said no such thing.

In the December 13 press conference on the findings of the UN mission, Sellstrom said only that “2 kilometers could be a fair guees” without specifying a maximum — much shorter than the initial estimates, but within range of the revised figure of up to 2.5 kilometers.

Just to be clear that Sellstrom never pointed his finger at the insurgents, here is an extract from an interview in January:

Several times I asked the government: can you explain — if this was the opposition –– how did they get hold of the chemical weapons? They have quite poor theories: they talk about smuggling through Turkey, labs in Iraq and I asked them, pointedly, what about your own stores, have your own stores being stripped of anything, have you dropped a bomb that has been claimed, bombs that can be recovered by the opposition? They denied that.

To me it is strange. If they really want to blame the opposition they should have a good story as to how they got hold of the munitions, and they didn’t take the chance to deliver that story.

2. HERSH DOESN’T KNOW ABOUT THE ROCKETS

The second prop for Hersh’s argument is that the rockets are “homemade”, implying that crude munitions could only have been used by insurgents.

But, as easily could have been ascertained from the United Nations reports and analysis of specialists, the rockets were not knocked up in someone’s backyard. Eliot Higgins has put together the textual and visual documentation of a 122-mm “Volcano” rocket introduced by the Syrian military into the conflict more than a year ago — indeed, Higgins summarized the evidence in a critique of Hersh’s initial article in December.

Apparently, the journalist never bothered to check the information but has simply continued to repeat his “homemade” formula for months.

3. HERSH IGNORES ALMOST EVERYTHING ELSE

Hersh’s conspiracy theory turns upon the claim that it must be insurgents who hit sites in East Ghouta.

But these were not the only targets on August 21. Moadamiya in West Ghouta — 16 kilometers from Zamalka and Ein Tarma — was also struck. And in that case, there were definitely regime forces within 2.5 kilometers of a town which has been besieged since November 2012.

So this was not a case of a single rocket fired on a single site, but multiple rockets fired on multiple sites with multiple supplies of chemical toxins.

Who had the capacity to fuel multiple rockets, to find multiple launch points, and to strike multiple targets? The insurgents or the Syrian military?

Hersh has never come close to addressing the question in two articles, let alone this answer.

Hersh’s final ploy in the interview is to imply that even the United Nations believes insurgents carried out the attacks.

He carries out this sleight-of-argument in two steps. First, he says the UN “wasn’t able to say that — who fired what”, ignoring the repeatedly-stated reason why: under its mandate from the UN Security Council, inspectors were not allowed to assess and conclude who fired the rockets, only that they were fired and carried chemical weapons.

This elision allows Hersh to bring in his supposedly conclusive source: “somebody from inside that investigation unit who was very clear that the weapons fired were homemade and were not Syrian army”.

“Somebody” proves Hersh’s case — alongside the “former senior intelligence consultant” who could well be the discredited former US Department of Defense employee F. Michael Maloof.

HERSH IS A PROFESSIONAL; HIS CRITICS ARE “BLOGS”