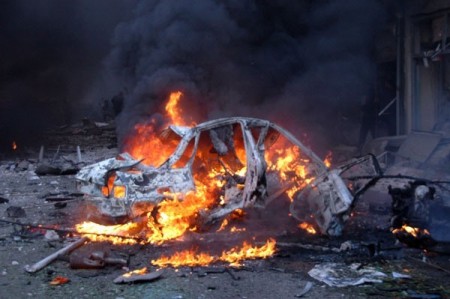 State media report that 25 people were killed and more than 107 wounded by a double car bombing in Homs in central Syria.

The detonations were 30 minutes apart in the Karam al-Luz section of Syria’s third-largest city, which is largely controlled by regime forces. 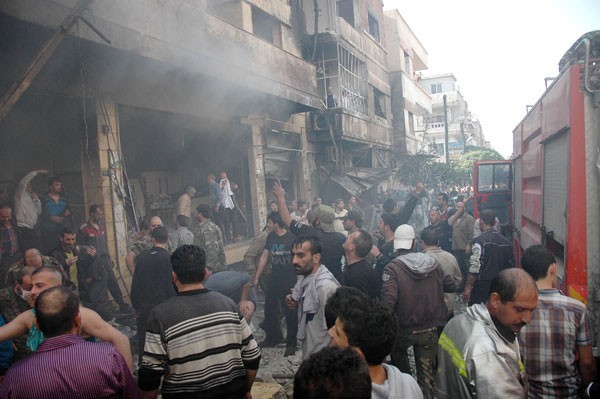 A photographer for State news agency SANA is among the injured.

No group has claimed responsibility for the attack.

Insurgent-held areas of Homs, including the Old City, have been besieged for months. In January-February, the situation of civilians became a focal issues at the stalemated Geneva talks between the regime and opposition. Limited provision of aid was finally agreed, with some residents being evacuated. 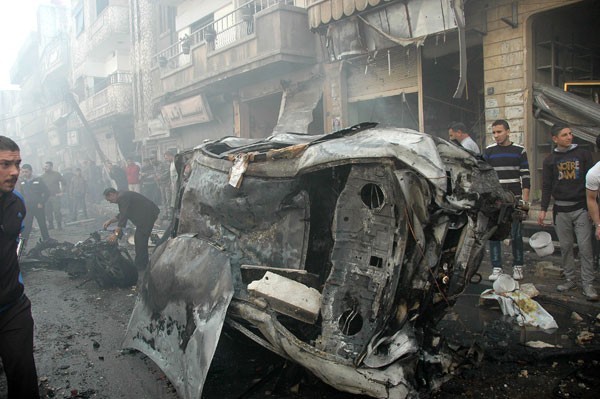 Insurgents capture a Syrian soldier as they advance in the Quneitra offensive in southwestern Syria, near the demilitarized zone with Israel:

See Syria 1st-Hand: The Insurgent Advance in Quneitra in Southwest

The Islamic State of Iraq has attacked insurgents in Abu Kumal in northeastern Syria on the Iraqi border.

Sources say more than 70 people were killed by ISIS. Casualties on the ISIS side are unknown but “high”.

ISIS fighters were driven out of Abu Kamal in the battles with insurgents earlier this year.

ISIS supporters claimed it has taken control of several neighborhoods. Activists reported fighting near the national hospital and the Aisha charity after ISIS fighters entered the town from several points.

Claimed footage has been posted of men executed by ISIS.

The Free Syrian Army said it still occupies the nearby border crossing to the Iraqi town of al-Qaim.

An FSA commander said, “ISIS are attacking our positions in Abu Kamal, and the battles since (Wednesday) are in three different areas about 15 kilometers (9.3 miles) from the center of the city. The battles are still continuing.”

Abu Kamal, with a pre-war population of about 70,000, has been under the control of anti-Assad forces since November 2012.

The Euphrates valley town had a pre-war population of some 70,000.

More Than Half Chemical Weapons Stocks Now Out of Syria

Julian Borger of The Guardian reports the latest update from the Organization for the Prohibition of Chemical Weapons:

Latest #OPCW figure. 54% of Syrian chemical weapons have been loaded on Scandinavian ships at Latakia, including 43% of high priority #CW

The Assad regime has missed a series of deadlines, set after last August’s chemical weapons attacks near Damascus, for the removal of stocks from the country. Officials have cited security issues and logistics for the delays.

All of Syria’s chemical weapons are scheduled to be taken to sea and destroyed by June 30.

Insurgents Claim Capture of Aqrab in Advance on Southwest Aleppo

Insurgents claim they have captured the Aqrab area, southwest of Aleppo:

The opposition launched the I’tassam campaign this week to seize five military installations in the area. The capture of Aqrab cuts the supply road to some of the positions.

The insurgents said on Tuesday that they had killed dozens of regime troops, destroyed two tanks, and claimed the road between two of their five targets, a-Ramusa and the al-Assad Military Academy.

“We are just around the corner from the city of Aleppo,” Lieutenant Colonel Abu Bakr of Jaish al-Mujahideen said. “The (southern) suburbs are no more than one kilometer from Aleppo.”

An insurgent group that was led by Sayfullakh Shishani, the Chechen killed in February’s assault on Aleppo Central Prison, has put out a video appeal for funds as it shows new, homemade rockets used against regime forces in Aleppo Province:

The group has been fighting alongside the Islamist faction Jabhat al-Nusra in operatoin such as the battles for Layramoun and Sheikh Najjar near Aleppo.

The appeal is addressed in particular to Muslims in the Russian Federation.

Former Insurgent: “I Put Down Arms Because of Leaders in Homs”

Syria Direct interviews one of the insurgents who put down their arms in Homs this week:

There are a number of reasons, among them the fact that we had begun to encounter great injustices from some leaders inside Homs as a result of the difficult circumstances there. You can stay alive by joining one of the military branches, all of which have their own distinguishing characteristics. We also had no knowledge of the fate that our leaders were steering us toward, and felt that they had failed to save Homs.

The former fighter said “the situation in Homs has gone from bad to worse” because of the blockade of neighbrhoods, multiple assassinations, and “the lack of food (that) makes people act like animals, behaving without thinking”.

He blamed regime supporters for this week’s killing of Father Francis van der Lugt, prominent for his support of Homs’ besieged residents and calls for humanitarian intervention.

Video: 1st Aid to Insurgent-Held Areas of Aleppo in 10 Months

Men pull 75 carts with aid into insurgent-held areas of Aleppo on Wednesday:

The assistance was brought into the divided city by the Red Crescent and the UN refugee agency on two trucks the juncture between regime-held western Aleppo and insurgent-controlled eastern districts. It was then taken by the men 1 1/2 kilometers (.9 miles) into the insurgent-held neighborhoods.

The operation, following a temporary ceasefire, was the first aid into the area in 10 months. The goods included food, blankets, and health kits.

Regime media continue to use the conspiracy theory of US journalist Seymour Hersh to attack Turkey for support of “terrorists”.

State news agency SANA cites Hersh’s latest interviews with Turkish media to say that prominent personalities in the American intelligence community Prove Turkey has played a role in the implementation of the chemical attack on the Eastern Ghouta”, near Damascus on August 21.