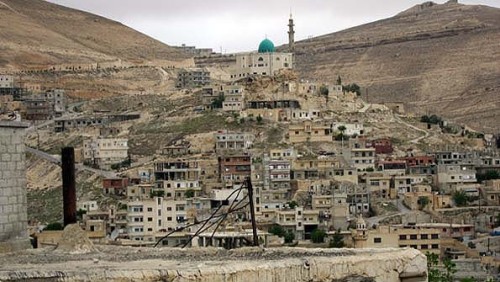 Reports indicate that Syria’s military are moving on Rankous, one of the last targets in their five-month Qalamoun offensive.

The Syrian forces have shelled the area in recent days, and Hezbollah’s Al-Manar TV said on Tuesday that the army has begun a ground offensive. A military source said the regime had taken a hilltop position as troops surrounded the town.

State news agency SANA said the al-Radar hill and other positions overlooking Rankous had been seized, with troops killing “scores of terrorists” in the town and the al-Jam’iat neighborhood.

The Syrian military, assisted by Hezbollah, have been seeking to claim all major cities and towns in the Qalamoun region between Damascus and the Lebanon border. They took Qara and Nabk early in the offensive, and Yabroud, the largest city in the region, fell to President Assad’s men last month.

The attacks, a half-hour apart, were in the Karam al-Luz district.

Red Crescent operations chief Khaled Erksoussi said, “Yesterday at noon we and a UNHCR team were able to bring in aid from the Jisr al-Haj crossing” at the juncture between regime-held western Aleppo and eastern parts of the city occupied by insurgents.

“The operation took place after the implementation of a ceasefire between all the parties that was respected during the mission,” said Erksoussi.

The goods, including food, blankets and health kits, were delivered to the crossing in two trucks and taken into the eastern neighbourhoods on carts pulled by 75 workers for 1 1/2 kilometers (.9 miles) each way.

Claimed footage of an Islamic State of Iraq and as-Sham suicide bombing, using a truck, near Tal Tayara in Aleppo Province on Tuesday:

According to the site FiSyria, close to groups within ISIS, a Saudi fighter drove 3 tons of explosives into a house where “30 infidels” were based.

ISIS also said it carried out a suicide bomb attack with an explosive-laden truck in al-Qahtaneh in Hasakeh Province, killing 60 Kurdish fighters. 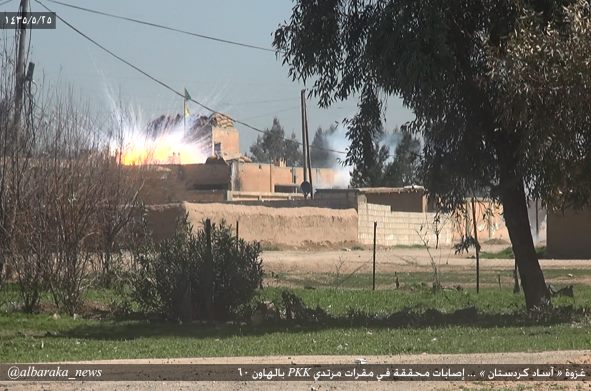 State news agency SANA reports that Iranian credit has funded a shipment of 30,000 tons of food which has arrived in Syria and will be available in markets within days.

The agency adds, “Other ships are due to arrive later on to ensure the flow of goods in the Syrian markets.”

Last July, Iran agreed a $3.6 billion credit to line to Syria for vital purchases, including oil.

The Islamic State of Iraq and as-Sham has challenged a prominent clan in Raqqa in northern Syria, after a young woman was in public without a veil.

ISIS’s version of Sharia in Raqqa, the largest city outside regime control, requires that women wear the veil when they go outside.

Members of the al-Bureij clan clashed with ISIS after an attempt to arrest the girl, who escaped. ISIS members subsequently tried to break into the family’s home.

Some family members left Raqqa for Deir Ez Zor in eastern Syria after the incident.

Insurgents have launched the I’tassam campaign to seize five military installations in southwestern Aleppo and claimed progress in the southern suburb of Aqrab, cutting the supply road to regime positions.

“We are just around the corner from the city of Aleppo,” Lieutenant Colonel Abu Bakr of Jaish al-Mujahideen said. “The (southern) suburbs are no more than one kilometer from Aleppo.”

The insurgents said they had killed 38 regime troops and arrested five others just before taking Aqrab. They claimed the road between a-Ramusa and the al-Assad Military Academy, two of the five military installations that they are targeting.

State news agency SANA said on Monday that 11 civilians were killed and more than 50 injured in mortar shelling on the southern Aleppo neighborhood of al-Hamdaniyeh and on Sa’ad Allah al-Jaberi Square, directly between Aqrab and the Military Academy.

SANA said regime force had killed scores of “terrorists” in the nearby opposition-controlled a-Rashideen, north of the Military Academy.

Navi Pillay, the United Nations Commissioner for Human Rights, has said that rights violations by regime forces “far outweigh” those by insurgents.

Syria’s Ambassador to the UN, Bashar al-Jafari, responded that Pillay was acting like an irresponsible “lunatic.”

Pillay, speaking to journalists after she briefed the UN Security Council, said UN teams had found violations by both sides, “but you cannot compare the two”:

There has to be justice and accountability and the situation in Syria should not be allowed to slip through the cracks.

(Pillay) has become lunatic in her action and is behaving irresponsibly. She’s manipulating, bluffing the truth and she is biased. She is using her position in favour of making further pressure on the Syrian government.

She doesn’t have any credible information with regard to what’s going on in Syria.

The Ambassador said Pillay was “biased”. He claimed Pillay had ignored “terrorist atrocities”, including those in the insurgency’s takeover of Kessab in the Lattakia offensive last month, and the journalism of Seymour Hersh asserting that insurgents carried out chemical weapons attacks.