Syria 1st-Hand: The Insurgent Advance in Quneitra in Southwest 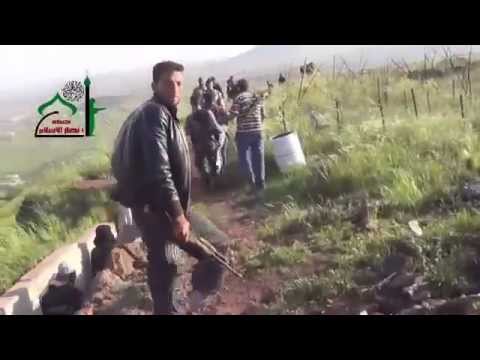 Largely unnoticed, insurgents have been steadily advancing through Quneitra Province in southwestern Syria near the Golan Heights and the demilitarized zone with Israel.

The offensive has been pursued for weeks. However, insurgents have now linked it to the campaign in Latakia Province in western Syria, several hundred kilometers away, as a counter to the regime’s gains in its Qalamoun offensive between Damascus and the Lebanon border.

With the capture of the Tel al-Ahmar Hills this week, the insurgents can offer some protection to their resupply routes.

Q: Quneitra has been the site of noticeable military escalation in recent days. Can you explain what triggered this new fighting?

The first reason for the escalation is the Tel Ahmar hills, which are in the center of the province. Regime forces use the hills as a base from which to launch military operations—bombardment and otherwise—in liberated territory in Quneitra. Secondly, rebel fighters in Quneitra have been trying to capture these hills for roughly two-and-a-half months.

Quneitra is nearly 400 kilometers from the coast. The relationship between the two battles is as follows. The Anfal campaign was launched in Latakia, and the rebels in Latakia started calling for other groups to open fronts in various parts of Syria—battles were initiated in Eastern Ghouta, Jabal a-Sheikh [in southwestern Syria], the western Damascus suburbs, and in Quneitra. Quneitra’s revolutionaries have met the call of Latakia’s revolutionaries. They chose to name their battle the Echo of Anfal out of brotherhood and unity.