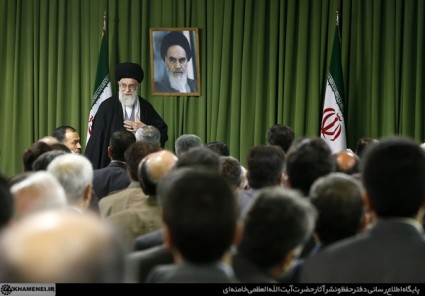 The Supreme Leader, addressing nuclear scientists on Iran Nuclear Technology Day, has said that research and development activities will slow down during the talks with the 5+1 Powers on a comprehensive deal.

The discussions, underway in Geneva, have considered whether Iran must cease work on the under-construction Arak heavy-water reactor, limit development and number of uranium enrichment centrifuges, and suspend the enrichment process at the Fordoo plant.

Nuclear achievements are not going to stop & no one has the right to trade them and no one will do so. #IRNucTechDay #IranTalksVienna #Iran

Khamenei warned that the US might continue to impose sanctions on Iran, even with the prospect of a nuclear agreement:

It’s not true 2say #sanctions are result of nuclear achivements,cuz if there wasn’t a #nuclear issue,they wud've found another excuse 1/2

just as US govt makes the excuse of #HumanRights during #Nuclear talks. If human rights issue is solved, they'll look for another excuse.2/2