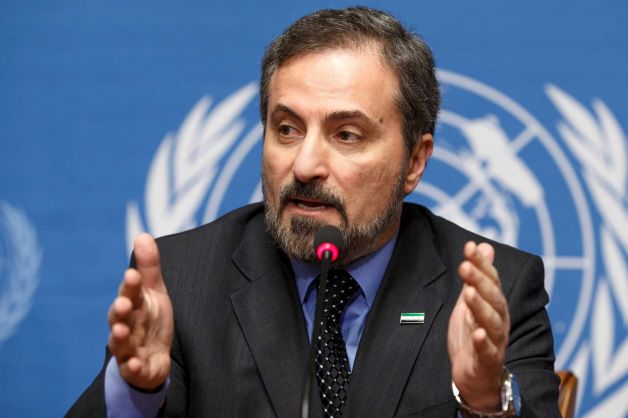 As the Geneva II talks on Syria adjourned on Saturday — possibly for good — it was revealed that the Assad regime added members of the opposition delegation to a “terrorist” list and seized their assets, including the house of one of them.

The opposition delegation learned of the decision when a copy of the Justice Ministry decision, invoking a 2012 anti-terrorism law, was leaked this week to an opposition website.

Asked why the opposition representatives had been put on the list, Syria’s Ambassador to the UN, Bashar al-Jaafari — a member of the regime’s Geneva delegation — said: “You are trying to terrorize me and you won’t succeed.”

Jaafari said the decision was made last November, “This has nothing to do with the Geneva conference. Whoever refuses to fight terrorism is part of terrorism.”

United Nations mediator Lakhdar Brahimi adjourned the Geneva talks yesterday after a meeting of less than 30 minutes with the two sides, “I apologize to the Syrian people….I apologize to them that in these two rounds we haven’t helped them very much.”

Brahimi urged both sides to “reflect” so progress could be made in a third round.

However, no date was set and opposition spokesman Louay Safi said, “A third round without talking about transition would be a waste of time.”

The Assad delegation refused all week to discuss a transitional governing authority, which the opposition insists must exclude President Assad, and insisted that the priority must be consideration of how to fight “terrorism”.

Brahimi put forth a provisional agenda on Friday which set “terrorism” as the first item, followed by the issue of the transitional authority, but the regime delegation refused to accept it.

The Supreme Military Council has dismissed General Salim Idriss and his deputy.

Idriss, who defected from the Syrian Army in July 2012 and was elected head of the SMC five months later, has been succeeded by Colonel Abdel-Ilah al-Bashir.

Al-Bashir is head of the Quneitra Military Council, which has been prominent in a current insurgent offensive in southern Syria. His deputy, Colonel Heitham Afeisi, is a leading member of the Syrian Revolutionaries Front.

An SMC spokesperson said Idriss was fired because of his “weak leadership and his wish to restructure” and a desire to “rebuild the institution with new leaders”.

A Turkish pro-jihad website, Haksöz Haber, has reported on a demonstration in Istanbul which praised jihadis in Syria including Sayfullakh Shishani, the Chechen fighter killed in Aleppo this month.

Sayfullakh lived in Turkey for some time as part of the Chechen refugee community before traveling to Syria after he became religious.

The website includes photos of a banner praising Sayfullakh, and a picture of a child whom it claims is Sayfullakh’s son in Istanbul. 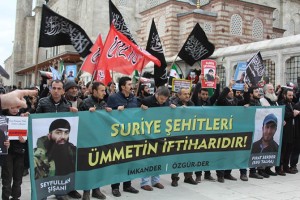 Meanwhile, Russian-language social media has circulated this photograph of another child claimed to be Sayfullakh’s son: 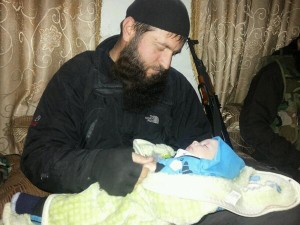 Oil Minister: Production Down 96% Since March 2011

Oil Minister Suleiman al-Abbas said on Sunday that production in Syria has fallen 96% since the start of the conflict in March 2011.

Most oil wells, in eastern and northern Syria, are in the hands of insurgents.

Al-Abbas said production was down to 14,000 barrels per day, down from a pre-war level of 385,000 bpd, because of “an increase in attacks by terrorists against oil facilities, Western sanctions, and the decision by foreign oil firms to suspend operations”.

US Blames Assad Regime for Failure of Geneva II Talks

US Secretary of State John Kerry has blamed Damascus for the failure of talks with the opposition at the Geneva II conference: “None of us are surprised that the talks have been hard, and that we are at a difficult moment, but we should all agree that the Assad regime’s obstruction has made progress even tougher.”

Kerry urged regime supporters to press for the creation of a transitional government — even though the Assad delegation refused to discuss this in Geneva — warning of consequences “if the regime continues with its intransigence in the talks and its brutal tactics on the ground.”

Reports are circulating of heavy fighting around Azaz near the Turkish border, as insurgents try to eject the Islamic State of Iraq and as-Sham from one of the last towns they control in Aleppo Province.

Liwa al-Tawhid and the Kurdish force Jabhat al-Akrad have both claimed the capture of territory around Azaz this weekend, as ISIS brought reinforcements into the town.

Azaz is significant as a key point for bringing men and supplies into the Syrian conflict.

Regime and Insurgents Agree Truce in Damascus Suburb of Babbila

Activists and citizen journalists are reporting a truce between insurgents and the Syrian military in the Damascus suburb of Babbila, with women and children leaving the area: 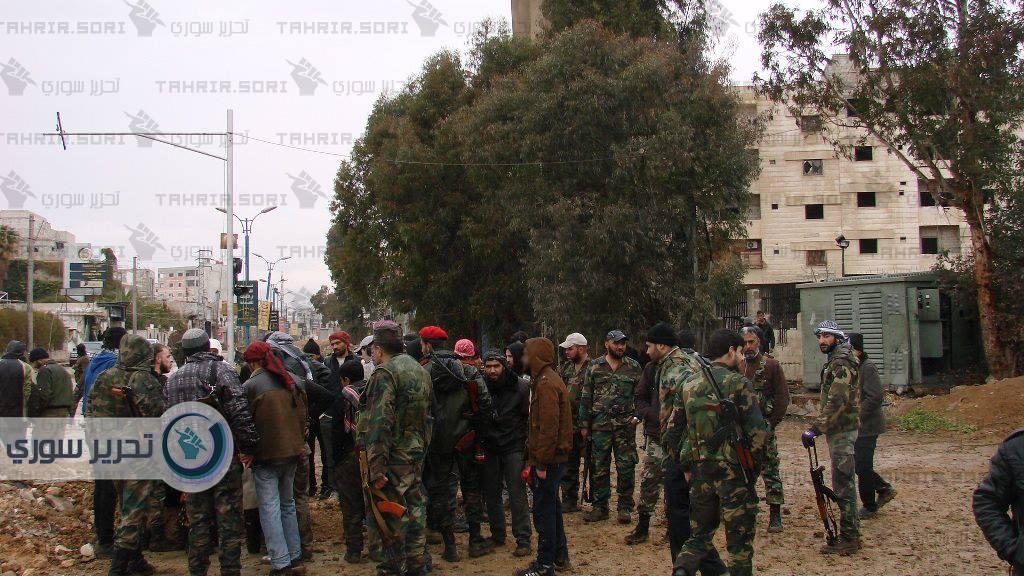 #Exclusive: #Syria: Women and children heading to Sidi Miqdad checkpoint in #Babbila after #SAA allowed them to leave pic.twitter.com/6JLkRftANn

The truce is one of a series that have been arranged in the last month in insurgent-held areas around the capital.

Babbila is just to the east of Yarmouk, where insurgents have reportedly withdrawn in return for the lifting of a eight-month siege.

#Exclusive: #Damascus: #Babbila: Syrian Government cleaning the streets of Babbila as a part of the truce agreement. pic.twitter.com/V5GWFdjsa6

Anwar Abdel Hadi, a Palestine Liberation Organization official, has said that most insurgents have left the besieged Damascus neighborhood of Yarmouk after an agreement with Palestinian factions.

“Palestinian fighters have deployed to the outskirts of the camp to prevent the entry of any non-Palestinian gunmen,” Abdel Hadi said.

Yarmouk, which had about 200,000 residents before the start of the Syrian conflict, has been under siege since last July as the Syrian military cut off food and supplies. Aid workers said more than 80 people died from hunger and lack of medical care.

The 18,000 people who remain finally received limited aid shipments in the past month, as 1,500 civilians were evacuated.

“We have not distributed food there over a week now which is potentially life-threatening for the besieged civilians trapped by the conflict,” UNRWA spokesman Chris Gunness said.

“The United Nations must have secure, substantial and sustained humanitarian access to the besieged civilians of Yarmuk.”

Video from the insurgent faction Ahrar al-Sham tells the story of victory in the village of Maan in Hama Province, denying regime claims of a “massacre” of civilians:

See Video Analysis: Was There a “Massacre” at Maan by Insurgents?

The Local Coordination Committees report that 118 people were killed on Saturday, including 10 women and 15 children.

Of the deaths, 68 were n Aleppo Province, 22 in Damascus Province and its suburbs, and 12 in Hama Province.