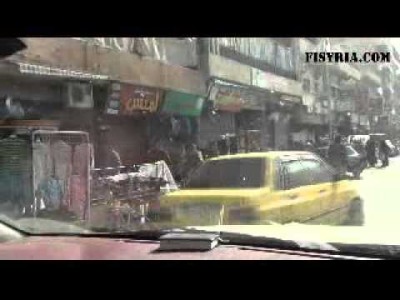 FiSyria, the Russian-language website close to Islamic State of Iraq and as-Sham commander Umar Shishani, has published video footage from the city of Raqqa, which is under ISIS control.

The footage, which FiSyria claims was shot from a car on February 8, shows life on the streets of the city.

There are at least two Russian speakers in the car — the cameraman and the driver. The cameraman appears to giving directions.

The cameraman or driver then gives a commentary in accented Russian:

This is our Islamic town, our Islamic town of Raqqa (stops in front of a small space between two stores, where men and boys are praying). This is the main street. The shops are closed.

See, all the sisters are wearing the niqab….Alhamdulillah, see, brother, here they’re building an Islamic town. There’s no cigarettes on sale, there’s no alcohol, all the women are covered up….Alhamdulillah that we are here.

In one day on the streets of Raqqa, we saw a lot of changes, which have taken place in the last month and a half. Literally, before the clashes with the so-called Islamic Front, it was hard to come across a woman here wearing a niqab, basically everyone walked around in tight clothes and mostly without the awrah.

After the town was liberated, all the mosques announced the introduction of Sharia norms:

1. All women must wear the niqab.
2. All trading posts will be closed during prayer times.
3. It is forbidden to sell cigarettes and alcohol.

Today we’re observing how it is in reality.