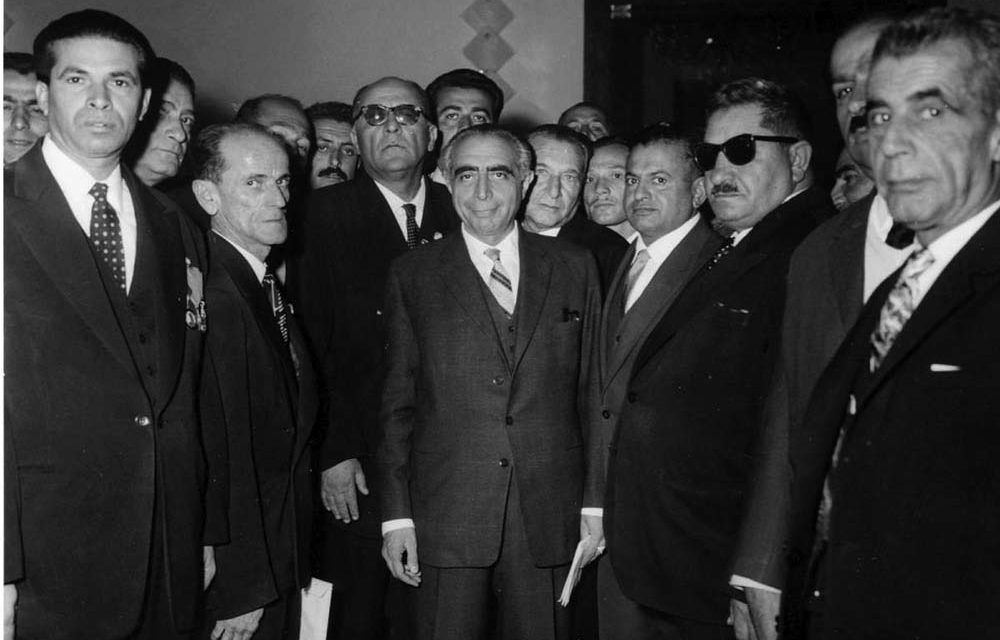 The latest development in Iran’s foreign policy, from from the thaw in relations with Washington to an interim nuclear deal, are part of a complex political dance in Tehran. As EA reported last week, President Rouhani has entered into an agreement with the Supreme Leader: to safeguard the interim nuclear agreement, Rouhani is sideliing issues of political and cultural “freedom”.

But how to evaluate the relationship not only between Rouhani and the Supreme Leader, but also with a force like the Revolutionary Guards, as discussions over the nuclear issue and Iran’s international position unwind and as the domestic contest over political prisoners and “freedom” continues?

See Have the Hardliners Defeated Rouhani in the Cultural War?

Maybe history can lend a hand, with the story of the short-lived premiership of Dr Ali Amini and the Shah in the early 1960s.

In May 1961, following two national elections marred by widespread fraud, huge student-led demonstrations, and teachers’ strikes in Tehran, the Shah appointed Amini as Prime Minister in an attempt to stabilize the political situation.

Amini was a highly educated and prominent reformist politician, who was well-respected in Washington when he was Iran’s Ambassador to the US. Upon taking office,, undertook a series of economic and social modernization programmes, which the Shah later co-opted under the umbrella of his “White Revolution”.

But Amini’s relationship with the Shah was fraught, to say the least. The monarch was reluctant to appoint Amini and later maintained that it was a result of American pressure. He made the appointment and initially kept the Prime Minister for three reasons:

— To some degree, they shared immediate goals for economic and social development;

— Given the economic and political instability within the country, he was not in a position to arbitrarily remove Amini;

— The Shah was shrewd enough to recognise that the reformist politician helped present a more acceptable image of Iran to the international community, in particular to the US where new President John F. Kennedy had expressed concern about the autocratic nature of the Pahlavi regime.

In July 1962 the Shah was presented with the opportunity to dismiss the Prime Minister when Amini attempted to force through cuts to the military’s budget. Reacting quickly, the Shah replaced Amini with his former schoolmate and close confidant, Asadollah Alam.

Alam’s appointment closed the brief window when Prime Minister Amini asserted some independence from the Shah. This was a return to the hands-on autocracy that would define the Shah’s rule until his overthrow by the Islamic Revolution in 1979.

Even in mid-1962, the three conditions for the Shah’s toleration of Amini were still relevant. Both still wanted to pursue economic and social development programmes. Iran had still not recovered economically, nor was the political situation as stable as the Shah and the US had hoped following the Prime Minister’s appointment. It was still important for the Shah, to some degree, to portray Iran’s government as progressive.

So why did the Shah suddenly move against Amini?

More importantly, what can these events tell us about the current situation in Iran?

Firstly, although the Shah was beginning to feel more confident about his own position in Tehran, the Prime Minister had set out to undermine a key pillar of the monarch’s security — the military. While the Shah would accept Amini as a useful tool, he would not stand for any threats to his rule.

The resolute support of the military was essential for the Shah to remain on the Peacock Throne. For Amini and other reformists, the military was a huge drain on Iran’s dwindling finances, which would be better spent on other development projects. That division of views could not be reconciled.

The same might be said of the continuing contest for power between Rouhani and the Revolutionary Guards, as well as their hardline supporters.

See Iran Daily: Boxing in Rouhani with Campaign Against “Sedition”

Unlike Amini, Rouhani came to office on the back of an overwhelming electoral victory, surprising many observers. Rouhani was not Khamenei’s first choice for President, and there have been clear indications that the two men have contrasting opinions on political, social and cultural questions.

However, just as the Shah was forced to tolerate Amini, the Supreme Leader has been forced to accept Rouhani for three key reasons:

— Rouhani won a huge popular mandate by winning the election: Khamenei either chose to accept the result with equanimity or was unwilling to risk a repeat of the massive unrest that followed the disputed 2009 Presidential ballot;

— after eight years of mismanagement by former president Ahmadinejad’s Government, the economic situation in Iran had become dire for Iranians across all sectors of society;

— although Rouhani and Khamenei differed on certain aspects of their foreign policy, both men shared the goal of easing the US-led sanctions against the country and resolving the dispute surrounding Iran’s nuclear programm

For Khamenei, and in spite of their differences, Rouhani represents an opportunity to restore people’s faith in the Iranian system, to stabilize the economy through better management and encouraging international investment, and to undermine Israel’s anti-Tehran rhetoric by finding a diplomatic solution to the nuclear issue. As the deal begins, prominent figures close to the Rouhani administration are already pointing to an improvement in the economy, while others note the positive impact on the price of imports.

Yet, Rouhani and members of his Government have been embroiled in a conflict with hardliners, in particular members of the Revolutionary Guards, who object to the current policy of engagement with the US and the President’s promises of more openness at home. This conflict has led to a number of verbal spats, with critics of the administration focusing especially on Rouhani’s attitudes towards social issues and censorship.

The problem for both Rouhani and the Supreme Leader is that these critics, much like their conservative counterparts in the United States, would seek to undermine the negotiations over Iran’s nuclear programme.

The Supreme Leader’s agreement with Rouhani says he will protect the president’s nuclear foreign policy so long as the administration holds off from pursuing “initiatives to open up Iran’s political and cultural space”. The results of this understanding are already emerging, as earlier this week a number of Grand Ayatollahs endorsed Rouhani’s nuclear policy.

The lesson from the Shah-Amini example, in conjunction with the deal between Khamenei and Rouhani, suggests that the Supreme Leader will not further undercut the President unless two interlinked circumstances arise.

The first is if the two men’s goals diverge dramatically. At the moment they both share the desire for a solution to the nuclear issue and the lifting of western sanctions. However, if Rouhani pushes in a direction of which Khamenei disapproves — i.e. limiting censorship or freeing political prisoners, most notably the reformist leaders Mir Hossein Mousavi and Mehdi Karroubi — then the Supreme Leader will actively seek to curb his power.

The second is if Rouhani moves against a key pillar of the Supreme Leader’s security — the Revolutionary Guards. The long-running battle between members of the Rouhani administration and members of the IRGC is likely to continue. However, if the government takes further steps in its effort to reduce the Guards’ role in the country’s economic and political spheres, then we can expect to see the Supreme Leader interpret this as a challenge to his rule.

As long as this contest remains confined to verbal sniping, Khamenei is likely to put it to one side as he supports Rouhani’s policy of pushing for a resolution of the nuclear issue and an easing of sanctions.

But if the President goes after the Revolutionary Guards, then we can expect the Supreme Leader to abandon their agreement, as the internal wrangling of Iran’s political system affects Tehran’s relations with the West.

From the President’s perspective, the question is whether success in the nuclear negotiations will be enough to maintain the support of the millions of Iranians who voted for him in June. Many of these people will have voted for Rouhani with the expectation that he would free political prisoners and begin to open up Iran’s civil society.

So . Rouhani’s agreement with the Supreme Leader may end up preserving his nuclear policy but harming his popular support. While the economy shows some signs of recovery, particularly in light of the interim nuclear deal, there is still a long way to go to clean up the mess inherited from Ahmadinejad.

The chances are high that this agreement will simply postpone a confrontation between the Rouhani administration and his conservative critics. And if the IRGC believes that it is targeted by the President, the Supreme Leader will act to protect one of the key pillars of his own security regardless of any agreement with Rouhani about his foreign policy.