Week Past, Week Ahead: Iran — Hardliners Hit Out at Nuclear Deal & “Sedition” 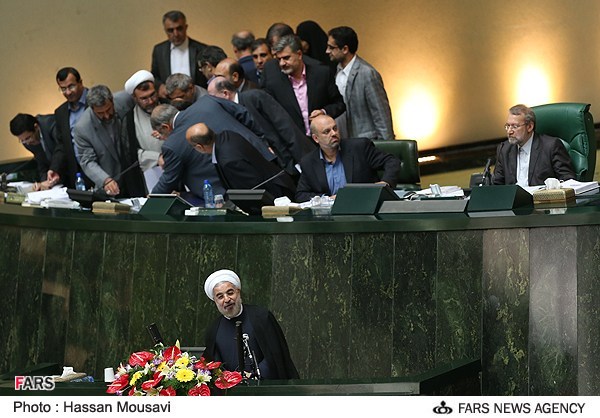 After months of being on the back foot amid the Rouhani Government’s ascendancy, hardliners in Iran went on the offensive. Given an opportunity by slow progress in talks to implement the interim nuclear deal, they sniped at the agreement.

More than 200 of Iran’s 290 MPs, responding to threats from US Senators to impose new sanctions, supported a bill for Iran to increase enrichment of uranium to 60% — technically, a meaningless step but one to show a tough line to both the Americans and President Rouhani. Legislators declared that Iran’s “red lines” of a right to enrichment and of a start to the easing of sanctions must be observed.

Amid the public noise, the Supreme Leader’s top foreign policy advisor, Ali Akbar Velayati, offered reassurance. Not only did he say that talks with the 5+1 Powers to implement the nuclear deal must continue; he indicated that bilateral discussions with the US would be helpful.

But the situation was far more uncomfortable for the Rouhani Government on the domestic front. Trying to close off political and cultural relaxation of the crackdown after the disputed 2009 Presidential election, the hardliners denounced the foreign-backed “sedition” of protesters and opposition leaders. They said the demonstrations were a “sin” which was “unforgivable”, indicating that no more political prisoners would be freed.

The campaign was supported by the Supreme Leader’s office, who put out a poster celebrating the punishment handed down on the detainees — including politicians, students, lawyers, journalists, and human rights activists — and by the judiciary.

Provided the US Congress does not return in the New Year and pass a bill mandating new sanctions on Iran, the Rouhani Government will continue to have the political space for implementation of the interim nuclear deal, although progress in technical talks has been slower than it hoped.

The Government will also retain a relatively free hand to meet the economic challenge. However, President Rouhani’s promises for a lifting of social and cultural restrictions and for a freeing of political prisoners may now have been put away by the hard-line opposition. It is highly unlikely that any prominent detainees, let alone the opposition leaders Mir Hossein Mousavi and Mehdi Karroubi, will be released in the near-future.

Meanwhile, watch for an escalating corruption scandal which is likely to further damage the allies of former President Ahmadinejad. Parliament appears ready to press its case over claimed embezzlement and mismanagement of billions of dollars, including prosecution of former senior Presidential advisor Saeed Mortazavi and billionaire Babak Zanjani.