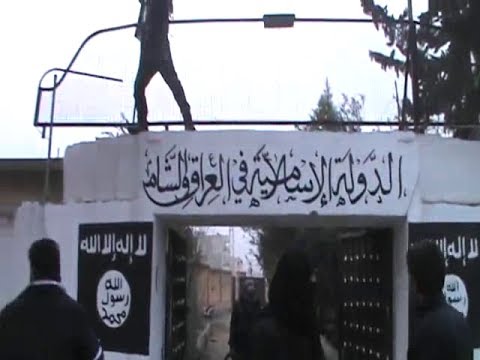 On the 10th day of the fight between insurgents and the Islamist State of Iraq and as-Sham, ISIS reportedly struck back in the city of Raqqa and executed scores of opposition fighters.

An unnamed activist told Al Jazeera that up to 100 fighters from Jabhat al-Nusra and Ahrar al-Sham were captured by ISIL in Raqqa, the town of Tel Abyad on the Turkish border, and nearby Qantari and executed.

“About 70 bodies, most shot in the head, were collected and sent to the Raqqa National hospital,” the activist said. “Many of those executed had been wounded in the fighting.”

Among those said to executed was Abu Saad al-Hadram, Jabhat al-Nusra’s commander for Raqqa Province who was captured several months ago by ISIS.

ISIS was said to have recaptured Tel Abyad over the weekend. The Syrian Revolution Coordinating Union saaid Turkish authorities closed a border crossing near the town and pulled out the facility’s staff.

Raqqa is the largest city to fall to insurgents during the Syrian conflict. An ISIS statement called on local tribes to withdraw their members from insurgent units and said the attacks against the group were designed to “destroy the nucleus of the caliphate” and promote a “heathen” alternative.

The UNHCR have posted this video of Syrian refugees crossing into Iraqi Kurdistan by barge:

The Simelka-Peshkhabour border crossing between Syria and the Kurdistan Region of Iraq reopened earlier this week, allowing 4,000 Syrian refugees to cross by barge to northern Iraq. The crossing had been closed since mid-September in the wake of an exodus of some 60,000 Syrians beginning in mid-August 2013.

At present there are 13 refugee Syrian camps or transit sites located in the Kurdistan region of Iraq and Al Obeidy camp in western Anbar Province. Iraq hosts 210,000 registered Syrian refugees.

According to UNCHR, thousands of refugees have crossed over from Syria into the Iraqi Kurdistan region in recent days.

A Russian language social media account close to North Caucasian ISIS fighters in Syria posted this image — which we have seen shared around social networks in the past few days — claiming that ISIS fighters have taken control of a border crossing with Turkey. The photo appears to have been taken in Tal Abyad on the border with Turkey.

Unconfirmed reports claim that the Islamic State of Iraq and as-Sham has taken the town of Al-Bab, near Aleppo.

ISIS attacks followed regime bombing of the town on Sunday:

Activists said six people died and 20 were injured in the airstrikes.

One activist told EA, “ISIS attacked while everyone was busy rescuing victims of the air raids. They are combing house by house now searching for fighters and weapons, and stealing stuff.”

The destruction in the town:

Russian state-owned newspaper Rossiyskaya Gazeta is also bemused by US Secretary of State John Kerry’s decision to give Russian Foreign Minister Sergei Lavrov two large potatoes at the start of their meeting in Paris on Monday, calling the move an “American show”.

The head of the U.S. diplomatic corps gave his Russian counterpart two huge potatoes, which in size, shape, and color resembled loaves of rye bread. In front of an astonished press, Kerry pulled them out of a large, 50 centimeter long box, which he apparently found in the back of some warehouse in the American residence in Paris. Together with a dirty bag where he kept the tubers, the Secretary of State gave the box to a puzzled Lavrov, leaving the media to wonder what relation these potatoes, brought from the American heartland, had to the Iranian or Syrian track. However, in turn, Lavrov promised Kerry to repay him in cucumbers….

Kerry’s attempt at “potato diplomacy” has had one benefit for the bemused Russian press — so far, at least, it has allowed it to focus on the meaning of the gift of the giant tubers rather than on the substance of the meeting between Kerry and Lavrov.

RG does give some small hint about that meeting, however:

Lavrov’s visit to Paris will allow (him) to make adjustments if not to completely rewrite, the scenario of the “show” in Switzerland, to give the conference on Syria more pragmatism. According to RG’s source, if the Syrian opposition and the authorities in Damascus can come to the table to start discussions on humanitarian issues and a truce, the we need to adjust to the fact that this process will take a long time. Perhaps even years.

Chaos During Evacuation of Civilians From Yarmouk Palestinian Camp In Damascus; Attempts to Get Aid Past Siege

Scenes of chaos on Monday during attempts to evacuate civilians from the Yarmouk Palestinian refugee camp in Damascus, which has been under siege since July 2013.

A delegation from the Palestine Liberation Organization is trying get six trucks with food and medicine to the camp after an attempt failed on Sunday, Palestinian officials said Sunday.

“All efforts to end the siege on Yarmouk camp have failed,” the director of the Palestinian Democratic Union reported. He said there was “an incident that occurred at the entrance of the camp, preventing the entry of supplies”, without elaborating.

A member of the Palestine Liberation Organization’s Executive Committee said there had been a heavy exchange of gunfire.

Ahmad Majdalani said attempts would continue, “We are in intensive contact with Syrian officials and militants in Palestinian camps in Syria in order to reach a solution and create a safe passage for the entry of relief supplies to Yarmouk.”

Local aid workers have said some residents have died of starvation.

The camp, made up largely of Palestinians, has been cut off by regime forces since July. It was taken by insurgents in December 2012.

Russian Foreign Minister Sergei Lavrov is pushing for the Geneva II conference to go ahead, despite no word from the Syrian opposition as yet regarding whether or not it will participate.

Lavrov is in Paris for a series of meetings, including with US Secretary of State John Kerry, regarding the planned “peace” talks.

The Russian Foreign Ministry on Monday has published a statement saying that Lavrov has discussed Geneva II with his Jordanian counterpart, Nasser Judeh.

The Ministry noted, “During an extensive exchange of views on the situation in Syria, the ministers expressed support for efforts to overcome the crisis in that country, by convening the international conference Geneva II on January 22. In this (the ministers) emphasized the need for a speedy end to the bloodshed, and for urgent humanitarian issues, including that of Syrian refugees in Jordan, to be addressed.”

Russian news outlet RIA Novosti is citing US Secretary of State John Kerry as saying that the Syrian opposition is prepared to discuss a prisoner exchange with the Assad regime. RIA said Kerry was speaking at a press conference after a meeting in Paris with Russian Foreign Minister Sergei Lavrov.

The leading insurgent faction Liwa al-Tawhid has called for caution and vigilance after an Islamic State of Iraq and as-Sham suicide bomber detonated explosives in the Masakin Hanano section of Aleppo.

Lavrov met Jarba in Paris as part of a last-minute push for the Geneva II talks. The Russian Foreign Minister is meeting with US Secretary of State John Kerry on Monday, also to discuss Geneva II.

The Russian Foreign Ministry said Monday that Jarba, as the leader of one of the leading Syrian opposition groups, was “urged to take responsibility and ensure participation of the National Coalition comprising a representative delegation of the opposition at the upcoming conference, in the interest of ending the armed confrontation and the joining together of all Syrians in an uncompromising struggle against terrorism and the agreement of a mutually acceptable framework for the transition to a peaceful settlement, in accordance with the aspirations of all citizens of the Syrian Arab Republic”.

After appearing to gain the diplomatic upper hand on Syria after the US backed away from military strikes against Assad in August 2013, in recent weeks Moscow has found itself on the back foot regarding its efforts to secure the Geneva II talks.

See Also: What Next For Russia If (When) Geneva II Fails?

An account posted on the Russian social network VK — written either by a Russian-speaking Chechen who is either in Syria or receiving information from a fighter there — complements ISIS claims of an advance in Raqqa, saying that the insurgent faction Ahrar al-Sham has “fled” and ISIS is “in control”.

The Chechen, writing on Sunday night, says that about 100 members of the “Free Syrian Army” in Raqqa have been captured, with one group from the “Islamic Brigade” repenting and joining ISIS. He does not mention executions.

Chechen fighters, notably the ISIS Emir Abu Umar al-Shishani, have been prominent in Syria since summer 2013, who has been fighting in the country since late summer or early fall 2012.

Soldiers from the FSA surrounded 15 Muhajir (foreign fighter) brothers and dropped a bomb on them, in the explosion 14 became martyrs. One Turkish brother survived at the behest of Allah.

In Aleppo, one sister went missing, the husband of one of the three Dagestan women who touched the infidels, made a ​​martyrdom operation (i.e. a suicide bombing — Ed.), may Allah admit him as a martyr.

The Chechen also says that ISIS controls the road between Hraytan, north of Aleppo city, and Aleppo:

The account posted images of the ISIS fighters preparing for a battle in Hraytan, including this image of a Chechen fighter manning a machine gun: 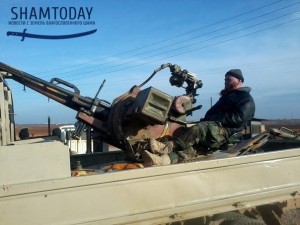 Other Russian language reports claim that the leader of ISIS’s northern branch, Abu Umar al-Shishani, has been despatched to Tel Abyad with a contingent of fighters.

Video: Debate Between Insurgents and Islamic State of Iraq in Binnish in Idlib Province

Amid the battles between insurgents and the Islamic State of Iraq and as-Sham, the two sides hold a peaceful debate in Binnish in northwest Syria:

As scores of civilians were killed by regime artillery and shelling of the al-Waer district of Homs on Sunday, State media were claiming that insurgent rockets had left l9 dead in the Karm al-Shami and al-Ghouta neighborhoods.

State news agency say rockets were launched from the area of Talbish on al-Ghouta.

Opposition activists reported on Sunday that up to 100 people had been slain in al-Waer by regime attacks. Graphic video showed the aftermath and fires set by the shelling.