Syria: The 65 Men Who Died Trying to Break the Siege of Homs 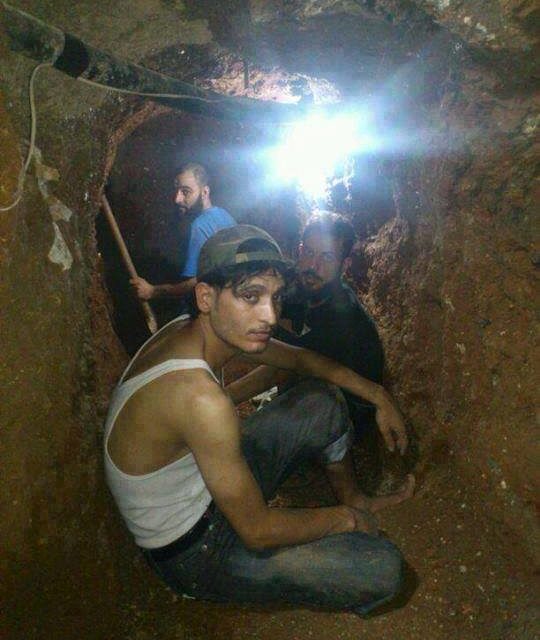 UPDATE: Video has now been posted of the last gathering of the men who tried to break the siege of Homs, including the football hero Saroot:

On Thursday, news circulated that scores of insurgents had been killed in a failed operation in Homs city in central Syria:

40 martyred 15 injured 8 made it back alive. Tragedy of rebels saving their people from clutches of regime & inside informants #Homs #Syria

On Friday morning, the death toll was put at 65, but it was still unclear — how and why had these men died?

Rose al-Homsi offers the answer: “They wanted to break the siege of several neighborhoods in Homs.”

In this picture are men we knew and didn’t know. What’s the story?

Did you know there are several neighbourhoods in Homs under siege for over 2 years? What were these areas like before?

They actually held the most beautiful of history. These areas all rose and protested [in] beautiful large protests. Who led them? The likes of Saroot – the David Beckham of the city. An actress who left her wonderful life and headed to these areas to protest against the regime. Kids and women and men in their thousands.

What happened? The regime shot and shot and shot, but despite the death the people didn’t stop. Soldiers defected and young men joined the soldiers to protect the protests. But it got worse. The regime started bombing the areas and slowly people started to die in larger numbers so families started to flee. But very soon the regime surrounded all sides and began its war on these areas –– we are talking Old Homs [and] a couple of dozen of neighbourhoods plus these ones: Khaldiyeh & Alqarabis & Alqsoor & Jouret Alshayah.

The siege started and the men started using weapons against the regime in an attempt to create spaces for the women and kids to leave. Some left but many continued to die as the regime up to today has used planes and poisonous gases and missiles to target these areas. They are surrounded by normal areas not bombed until recently. The besieged areas are destroyed. People in there are in touch with us and the photos and videos are horrendous. Families living in the rubble and elderly dying of the cold and hunger.

What happened yesterday? So after 2 years of siege the men decided to work to break [it] and open a large part to allow the families out. They planned it well — the FSA [Free Syrian Army] group belonging to the footballer Saroot, one of the most famous in Syria.

What happened? They were caught by regime forces that surrounded as usual. All were executed. This exceeds 60 men who wanted to break the siege. That means dozens of new widows and orphans. Dozens of broken families. Less men inside to defend the civilians and help them. The footballer lost 2 of his brothers (he lost a brother previously), and his entire group was murdered as he survived on the brink of death.

Pray for them and their families. Educate others on the situation in Syria. End the siege in Homs and Daraa and Damascus suburbs and others. Stop the war, stop the killing, and let us start new helping the people with a new government that cares and no terrorist groups to further hurt the people.