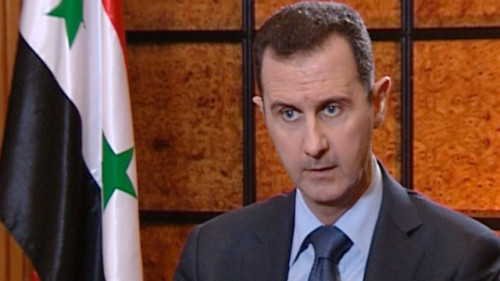 Over the last two weeks, we have noted signs that some US officials are ready to accept President Assad’s remaining in power in Syria, fearing the alternative of an “extremist” takeover of the country.

See Video Analysis: The New US Narrative — “Choose Assad or Choose The Extremists”

Support for that assessment now comes from members of the opposition Syrian National Coalition, speaking to Reuters:

Western nations have indicated to the Syrian opposition that peace talks next month may not lead to the removal of President Bashar al-Assad and that his Alawite minority will remain key in any transitional administration, opposition sources said.

The message, delivered to senior members of the Syrian National Coalition at a meeting of the anti-Assad Friends of Syria alliance in London last week, was prompted by rise of al Qaeda and other militant groups….

“Our Western friends made it clear in London that Assad cannot be allowed to go now because they think chaos and an Islamist militant takeover would ensue,” said one senior member of the Coalition who is close to officials from Saudi Arabia.

Noting the possibility of Assad holding a presidential election when his term formally ends next year, the Coalition member added: “Some do not even seem to mind if he runs again next year, forgetting he gassed his own people.”

Earlier this month, Ryan Crocker — a former high-level US diplomat who may have been speaking for current officials — said, “We need to start talking to the Assad regime again….It will have to be done very, very quietly. But bad as Assad is, he is not as bad as the jihadis who would take over in his absence.”

See Analysis: Is Obama Preparing to Accept Assad in Power?

For [peace talks in] Geneva to produce an arrangement acceptable to the United States and Russia, the opposition would have to accept taking part in a transitional administration with a strong Alawite presence. Assad may or may not stay as president but at least he will have diminished powers.

If the opposition rejects such a deal, they will lose most of the West and only have Saudi Arabia, Libya and Turkey left on their side.

Another member of the Syrian opposition, “in touch with US officials”, said Washington and Moscow appeared to be working on a transitional framework in which Alawites would retain their dominant role in the army and security apparatus to assure their supporters against retribution and to rally a unified fight against Al Qaeda with moderate insurgent brigades, who would be invited to join a restructured military.

A “senior Western official” said that Russia and the US have discussed which government officials — and up to what level of seniority — could be retained in a transitional phase but that they had not agreed any fixed blueprint.

Washington’s envoy Robert Ford, a former Ambassador to Syria, was at the Friends of Syria gathering in London last week. He reportedly is now in Turkey speaking to opposition groups.

Ford said on Wednesday that he would not be seeing the newly-formed, powerful insurgent bloc the Islamic Front because it “has refused to sit with us without giving any reason”.