Syria: US Shifts Position — Again — on Co-operation with Islamic Front 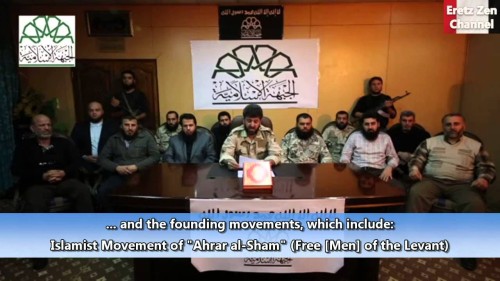 In yet another shift of Washington’s position, a “senior U.S. official” has said that the Obama Administration will consider supporting an expanded Syrian insurgency that includes the recently-formed Islamic Front, provided the groups are not allied with Al Qa’eda and agree to back peace talks in Switzerland in January.

Through Robert Ford, the former American Ambassador to Syria, the US established contact with the Islamic Front, launched by seven leading factions in November. However, the initial talks were “inconclusive”, foundering on the Front’s resistance to any conference without an assurance of President Assad’s departure.

Then on Wednesday, Washington lashed out at the Front, declaring that it had seized the headquarters of the Free Syrian Army — backed by the US — at the Bab al-Hawa crossing on the Turkish border. The Americans cut off non-lethal aid to the insurgency in northern Syria in response.

See Syria Spotlight: The Real Story Behind US Cut-Off of Non-Lethal Aid to Insurgents?

The US claim was denied by the Front, the opposition Syrian National Coalition, and the FSA’s Supreme Military Council. All said the Islamic Front’s fighters had responded to a request by the FSA for protection after an armed group — possibly the Islamic State of Iraq and as-Sham — had raided the warehouses.

This may have prompted the senior US official to soften the American line, calling on the Islamic Front to return American vehicles, communications gear, and other non-lethal equipment from the Bab al-Hawa warehouses: “We want our stuff back.”

“We don’t have a problem with the Islamic Front,” the official said, but he added that any movement toward including them in a US-backed coalition is a “work in progress”.

The Front has been pressing for inclusion in the SMC, and wants to be represented at the Geneva talks, according to rebel commanders. Front leaders are reportedly in discussions this week with the SMC commander, Gen. Salim Idriss.

Ex-Ambassador Ford is travelling to London on Friday to meet other international backers of the opposition, and then to Turkey for discussions with the Syrian National Coalition. He may also meet there with the Islamic Front, said the senior official.