Syria Spotlight: The Real Story Behind US Cut-Off of Non-Lethal Aid to Insurgents? 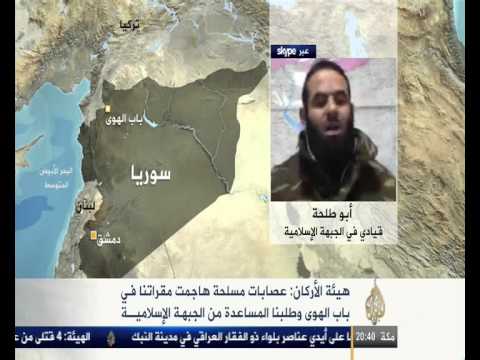 On Wednesday, both the US and Britain suspended non-lethal aid to northern Syria, expressing anger at the Islamic Front’s “capture” of the Bab al-Hawa crossing, on the border with Turkey.

The problem, according to Washington and London, was that the Front had taken the crossing not from the Assad regime, but from the fellow insurgents of the US- and UK-backed Free Syrian Army.

The US response is a change of course from its approach to the Front, founded last month from a merger of seven leading factions. Only last week, reports established that the Americans had been in contact with the group, probably attempting to get it to support the US initiative for a “peace” conference in Geneva.

On Wednesday night, US media put out the story that Secretary of State John Kerry is furious with the Front over its “takeover” of the Free Syria Army’s positions.

According to them, an unknown group — possibly from the Islamic State of Iraq and as-Sham, possibly from a gang unaffiliated to the insurgency — attacked FSA warehouses, so General Salem Idriss, the head of the Supreme Military Command, called the Front for assistance.

When the Front’s faction such as Suqour al-Sham and Ahrar al-Sham arrived, they found one of the warehouses completely emptied and another with 50% stock gone. FSA officers handed their keys to the Front without much explanation, saying only, “You’re now in charge and please protect our properties.”

The sources claim that the same handover of keys and request for protection took place at the FSA Headquarters in Bab al-Hawa.

The Supreme Military Council have now issued a statement confirming that it did call in the Islamic Front for protection, a rough translation of which is below.

In reference to what is being shared with regards to the raid and theft from the headquarters, we disapprove and deny the statements that are being linked to the Chiefs of Staff of the FSA and reported by social media and television channels. And we point that what actually happened was an attack conducted by an unknown armed “gang” and we called for help from some of the factions in the area including the Islamic Front, who answered the call which we are thankful for. The headquarters were secured thanks to God first, and their help second. And we must point out also that all that is being eluded to regarding the issue besides what has been noted above is not the truth and has not been released by any side belonging to the FSA Chiefs of Staff.

An insurgent from the Islamic Front describes the events:

The sources summarize, “The Islamic Front’s factions were always in control of the border crossing, and the FSA presence there was always weak — a base and a few warehouses. So it’s not true to speak of a ‘takeover’ by the Front.”

And then they add a claim that puts a question mark over what the US was really doing when it cut off non-lethal aid: “The Supreme Military Council informed their western allies, so the US totally knew what really happened.”

So was the US, unhappy that the Islamic Front did not respond to its approach by supporting moves for a “peace conference”, looking for a pretext to halt its assistance?

And did it do so by re-working the story of what really happened at Bab al-Hawa?