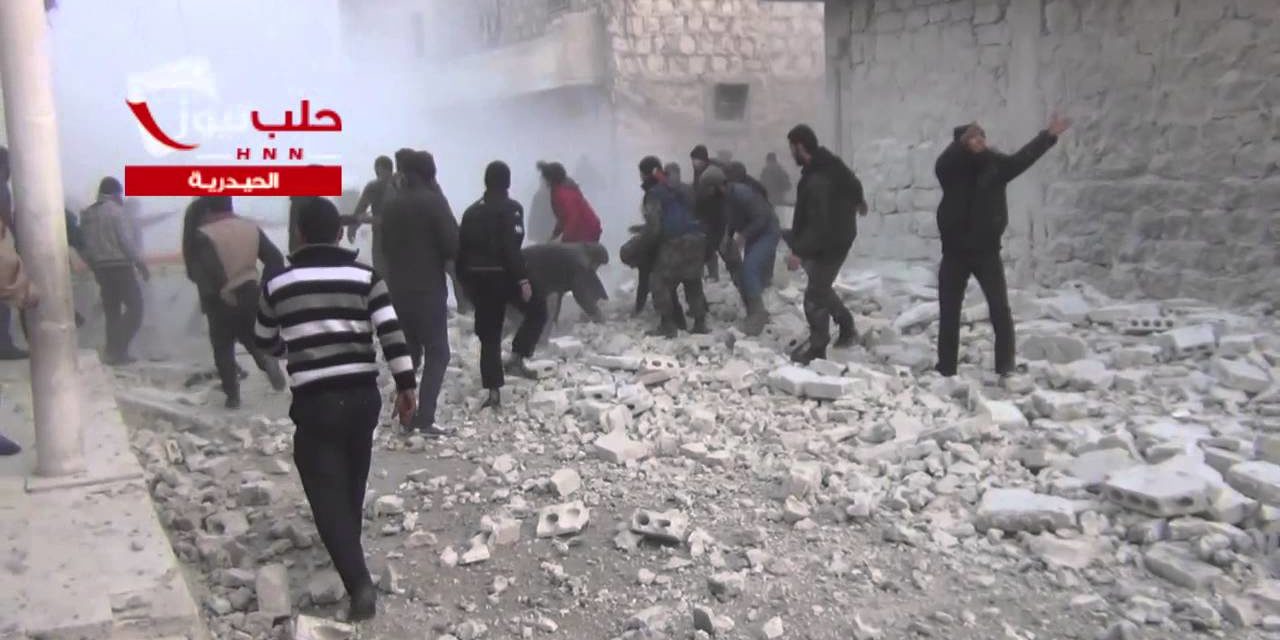 Syrian forces resumed bombing of insurgent-held areas of Aleppo on Monday, after killing scores of civilians this weekend.

Bodies being retrieved in Inzarat:

More footage has been posted of wrapped corpses.

The opposition said at least 100 civilians were killed and 350 injured on Sunday in regime bombing of areas of Aleppo. A list of names has been posted.

Syrian warplanes hit at least 10 locations in strikes that included barrel bombs, with at least one on a crowded taxi square in Haydarya.

The moment a barrel bomb hit on Saturday:

The report from Sky News Arabia:

Near Damascus, at least 21 people died in regime attacks on Doumair, with more slain in Douma.

Video of the bodies of the Doumair dead has been posted.

The Violations Documentation Center records 81,455 people killed since the start of the conflict in March 2011. Of the dead, 60,220 were civilians.

Insurgents claim they have taken Deir Salman in East Ghouta, near Damascus, and a nearby regime post:

Footage of slain troops has been posted.

Amid Conflict, A Project of Hope “Democracy from the Children”

Syria Untold reports on an initiative for long-term progress amid conflict:

The town of al-Maliha near Damascus has been under…siege for many months, and it is a place of daily clashes between the regime’s forces and militant groups. Despite this daily danger, a group of activists has taken on themselves to provide psychological and mental support for the children of the town. This, according to one activist, was done to relieve some of the burdens from the families who are already worried about staying alive in this time of madness. In the beginning, the local communities were wary of trusting their children to people they didn’t know, but in the end, “they understood the importance of our work, and we have received several requests to do this on a regular basis”.

The project served around 60 children, divided in six groups, each with a different daily activity. Finding and furbishing a suitable place was the hardest part, according to the activists: “We had to find a safe place, away from the daily bombardment. We also needed to work in secret, away from the regime’s spies.” The project was also faced with financial difficulties, as it was financed by the activists themselves.

The activities started with a meeting of each groups where the main ground rules were laid through democratic voting among the children. Suggestions for activities were also subject to the children’s votes. This was an important component of the project according to one activist: “This was one of the first attempts to cultivate a democratic spirit in the children by involving in the decision making. Democracy is a culture, and we hope to be planting the seeds of that culture.”

The Islamic Front has posted its first video on the situation in East Ghouta, near Damascus, promising further advances in the province.

The statement said insurgents have taken all towns and villages in an area of more than 40 square kilometers in East Ghouta, “eliminating the first line of defense of the Assadis”, targeting key regime positions, and destroying scores of tanks, armored vehicles, and artillery.

The Front claims that more than 800 troops and members of foreign militias, including 200 Syrian Army officers, have been killed and many others have been captured.

Insurgents launched a campaign last month against regime checkpoints, seeking to lift the siege of opposition-held suburbs. Last weekend they posted an invitation to the Red Cross and Red Crescent to start delivering aid, promising to protect the agencies.

Insurgents on Verge of Victory in Adra?

Sources indicate that the insurgency may be on the point of taking all of the town of Adra, 12 miles northeast of Damascus.

The sources says scores of regime fighters have been killed and have retreated into a pro-Assad neighborhood in the town. Insurgents are now trying to clear barricades.

In an indication of the impending insurgent takeover, the Syrian military is now bombarding Adra with heavy artillery and rockets.

If the opposition takes Adra, it will be a significant check to the regime’s Qalamoun offensive, which claimed the town of Nabk — to the north of Adra — last week.

One of a number of statements by insurgents promising retaliatory attacks on Syrian forces in regime-held areas, after bombing killed scores of civilians last weekend in Aleppo:

The insurgents said they were giving a 24-hour warning so civilians could leave the threatened areas.

Syrian forces, supported by Hezbollah and Iraqi militias, have captured Qara and Nabk in the month-long offensive to take territory between Damascus and the Lebanese border. They retook Deir Ataieh after it was briefly occupied by insurgents.

However, insurgents claim they still hold most of the area outside the towns, and they also say that they still block the Damascus-to-Homs highway. The regime is also in a protracted battle over Adra, 12 miles northeast of Damascus.