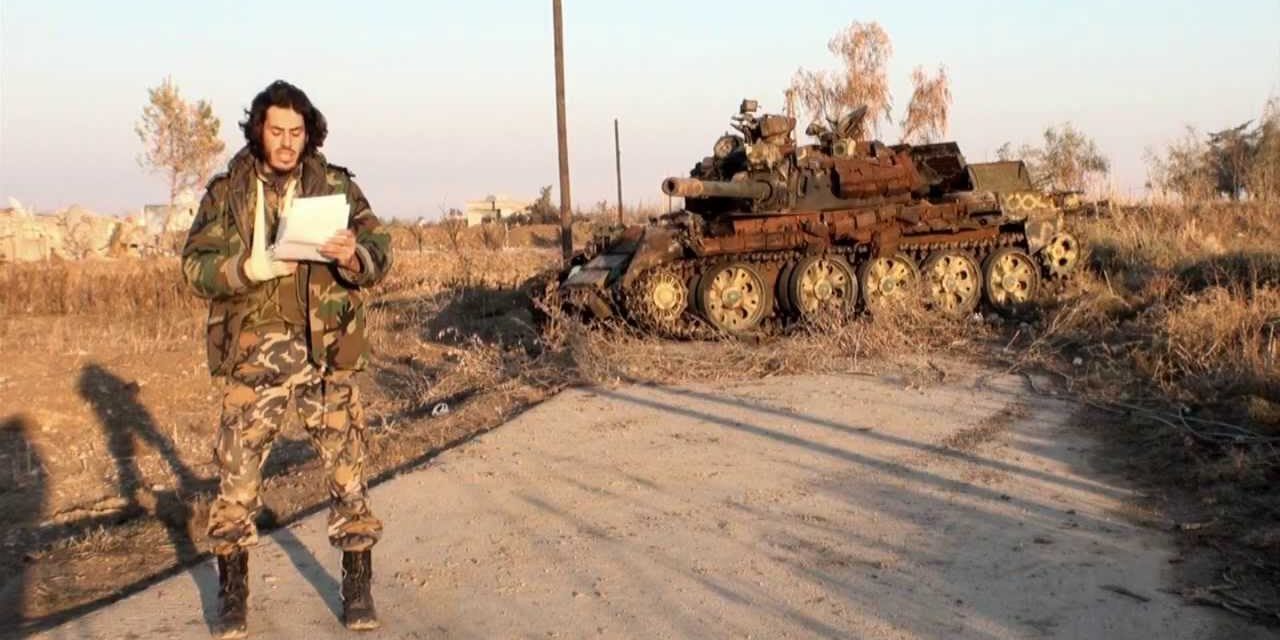 Insurgents have partially lifted a media blackout to post videos declaring victory in Phase 1 of their month-long offensive to break regime positions in East Ghouta, near Damascus.

Opposition-held territory in East Ghouta, which has been subjected to chemical weapons attacks and regular regime bombardment, has been besieged for many months. The insurgent campaign initially seeks to clear Syrian military checkpoints to ease the blockade.

In Phase 1 of the offensive, opposition forces sought to secure supply routes to the south and to the Jordanian border. Sources say this goal was achieved by last Saturday.

The Islamic Front posted a video claiming that insurgents have taken all towns and villages in an area of more than 40 square kilometers, “eliminating the first line of defense of the Assadis”, targeting key regime positions, and destroying scores of tanks, armored vehicles, and artillery.

The Front claims that more than 800 troops and members of foreign militias, including 200 Syrian Army officers, have been killed and many others have been captured.

Scores of videos have been posted by the Ahrar Ghouta faction and by Liwa al-Islam.

On occasion, the released videos mention particular towns, such as Otaiba, but most just say “mujahideen” have carried out successful operations in East Ghouta. However, the collection appears to show insurgents occupying the center of Deir Salmon (see map) and Qasimayah and moving into Otaibah.

Footage has also been posted of slain Syrian officers and a soldier who was killed after refusing to surrender.

Some of the released footage:

Attacking a base of pro-regime militia:

Inside a building in Otaiba:

0:01 In the name of God the most gracious, the most merciful.

0:04 The general leadership for the battle of ‘God is the highest and most honorable’.

0:22 After the media silence on the battle for breaking through the siege which is part of the strategy of this battle. We have assumed Friday morning of the 20th of the holy month of the Lord the year 1435 of hijrah.

0:43 The enemy has implemented a military action that he has carefully planned for.

0:49 Its goal is the siege/blockade of Ghouta politically, militarily, and economically over the period of 8 months.

0:59 The enemy did not have an effort or a weapon that it did not employ which included chemical weapons, which is forbidden by human rights.

1:33 to wage this battle that we have planned for by allying ourselves with some soldiers inside the enemy lines.

1:41 With great precision, that stunned the regime and its supporters. Here we stand at the results of the first phase in this continuous battle:

1:52 Liberate many towns that are stretched over an area of 40 kilometers;

2:06 Destroy the first defense line of Assad forces in Ghouta that is stretched over 8 kilometers;

2:13 Destroy the control headquarters at one time which frightened the enemy;

2:43 Killing 800 of Assad forces & allies, with 204 bodies of them in hand of rebels, including leaders of different ethnicities;

2:54 Seize 44 armed vehicles including 4 Tanks and some other light weapons.

3:10 Finally, we assure the enemy and their supporters that the rebels no longer are monopolized and that we will cut every hand that surrounds us and kills our children.