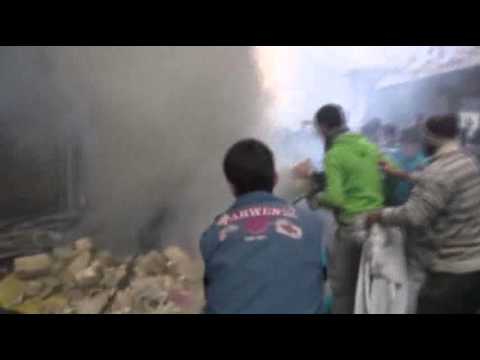 Monday was marked by two very different but linked stories. Beyond the immediate concern of civilian deaths, each pointed to questions for Syria’s regime.

In and near Aleppo, the Syrian military continued its escalation of airstrikes, which have taken more than 200 civilian lives since Saturday. Another 56 people were killed across Aleppo Province yesterday, according to the Local Coordination Committees, as the regime hit at least seven areas.

See Regime Resumes Bombing of Aleppo, After 100+ Killed at Weekend

Aftermath of a strike in the Shaar district:

Why have President Assad’s forces stepped up the deadly attacks, knowing that almost all the victims will be civilians rather than insurgents? There are no signs that the strikes are in preparation for a ground offensive to reclaim territory, or even that they are degrading insurgent positions.

That leaves the explanation of a “terror” campaign, but why? One possibility is that the regime is acting out of frustration or even covering up for recent difficulties. Following some success in its offensive east of Aleppo last month, opening up a corridor to the city with the taking of as-Safira, the Syrian military has made little progress.

Indeed, information — limited by the insurgency’s media blackout, but confirmed by source — is that opposition fighters have hit back at regime forces south and east of Aleppo and may even be in a position to put pressure on as-Safira.

The regime’s difficulties were highlighted by Monday’s second stories. After weeks of blackout over their offensive in East Ghouta, near Damascus, the insurgency broke silence with the uploading of more than 100 videos to YouTube about Phase I of the campaign.

The newly-formed Islamic Front spearheaded this dramatic video “press release”, claiming that the opposition has taken 40 square kilometers of territory, captured regime armored vehicles, killed more than 800 Syrian forces — including scores of officers — and, most importantly, has opened up supply lines to insurgent-held areas which have been under siege for months.

Exercising some caution, given that much of the video is from past days, the clips indicate that the insurgency has taken a couple of towns and is putting pressure on Otaiba. They also point to a bloody campaign in which the opposition forces are much better-equipped and better-organized than in recent months.

Sources are promising further news in a Phase II of the operation. If this materializes, it could point to a shift — not a decisive one, but certainly one countering the Syrian regime’s recent claims of advance — in the conflict.

Khan, a 32-year-old orthopedic surgeon, was seized by regime forces in Aleppo in November 2012 after he entered the country on a humanitarian mission.

Robertson said, “There is no excuse whatsoever for the treatment that he has suffered by the Syrian authorities who have in effect murdered a British national who was in their country to help people.”

Khan’s brother Afroze said the Syrian National Security Agency had promised the doctor’s release this week but then on Monday said he had died.

The Foreign Office said in a statement that Syrian authorities have consistently ignored requests for consular access to Khan and information about his detention.

British lawmaker George Galloway said he had been in contact with high-level Syrian officials “many times” about Khan and was supposed to fly to Damascus on Friday to bring the doctor home.

Sources report that the Damascus-to-Homs highway is still blocked by insurgents, despite the month-long regime Qalamoun offensive to control the area.

Clashes are ongoing near Rima — this video is from last week:

The sources say that Syrian forces are losing about a dozen men daily at the Yabroud/Nabek bridge.

Rescuing the injured and trapped:

In the Shaar district, retrieving a casualty:

A child cries, as rescuers try to find his mother amid rubble:

Insurgents have posted footage claiming to be of the firing of a Grad rocket towards Latakia airport in western Syria — if the clip is authentic, it would put opposition fighters no more than 25-30 kilometers away:

A group of insurgents from the Caucasian Emirate (Imirat Kavkaz) and Crimea have declared independence from the Islamic State of Iraq and ash-Sham. The move — of which we are waiting confirmation — would come after the leader of Jaish al-Muhajireen wal Ansar, Abu Umar al-Shishani, swore an oath of allegiance to the Emir of ISIS, Abu Bakr al-Baghdadi, saying that he had taken around 80% of Jaish with him to ISIS.

Reuters writes that the Syrian regime excluded the largely insurgent-held Deir Ez Zor Province, where polio broke out this year, from a 2012 vaccination campaign.

Damascus argued that most residents had fled although hundreds of thousands were still there.

In November, the World Health Organisation said 13 polios had been found in Deir Ez Zor, a region of 1.2 million people — more than 600,000 of them under 15 — in eastern Syria. Two more have since been recorded there, and the virus has surfaced in Aleppo and near Damascus in the first outbreak since 1999 in the country.

The massacres committed by terrorists against Syrians, particularly the massacres that took place against innocent civilians in Adra recently, are prompted by orders from those in Saudi Arabia, Turkey and other countries who support terrorism.

Insurgents and Syrian forces have been fighting for control of Adra, 12 miles northeast of Damascus, over the past week. Each side has accused the other of executing civilians during the clashes.