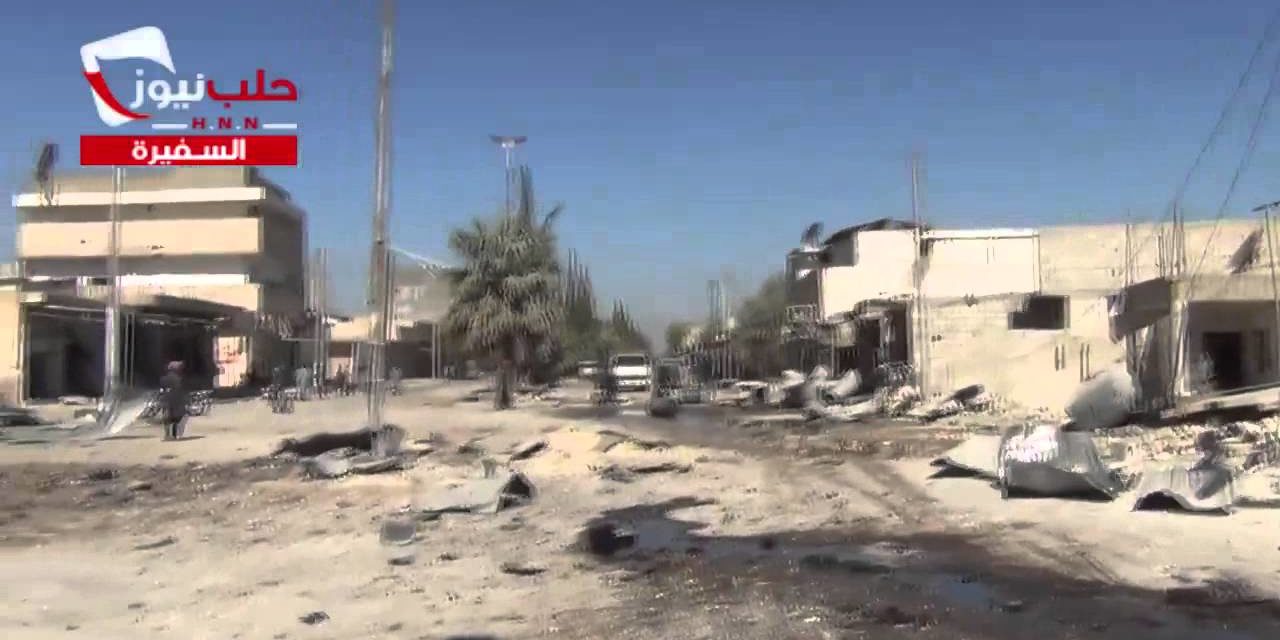 Spotlight: “We Don’t Know How We Will Survive”, Say Civilians In Besieged Moadamiyyat Ash Sham

SUMMARY: The regime, battling to open a supply line to its besieged areas in Aleppo, killed at least 22 people south of Syria’s largest city on Thursday.

Activists said airstrikes including barrel bombs and vacuum bombs killed at least 16 people in as-Safira. At least six more were slain near Manbij.

Video from as-Safira, near a military complex that is believed to include an underground facility for chemical weapons production and storage, showed men and boys hauling a blanket filled with body parts onto a jeep. Charred bodies already lay.

“Who is this?” one man asked. “By God, we don’t know, brother,” another responded.

Scenes after the airstrikes:

Insurgents established a near-complete blockade around Aleppo this summer, forcing the regime to bring in supplies by helicopter.

Last week, the Syrian military reclaimed Khanasser, on the north-south highway leading to Aleppo. However, reports were circulating on Thursday that insurgents have captured the town once more.

Turkey’s Foreign Ministry has criticized a claim in a Human Rights Watch report on killing of Syrian civilians Ankara is supporting the opposition groups responsible, describing the allegations as “unacceptable”.

The HRW report on the deaths of 190 civilians and abduction of 200 others on August 4 in Latakia Province said the opposition groups had entered Turkey with weapons and other supplies and then returned to Turkey for medical treatment.

We totally deny the claims that those groups enter Syria from Turkey and that Turkey provides them with weapons. It is wholly unacceptable to paint Turkey with such accusations. Turkey is doing its utmost to maintain security along the border and is carrying out operations to prevent smuggling.

Human Rights Watch said Turkey should increase its border patrols and prevent the entry of fighters and weapons bound for groups who are implicated in systematic human rights violations.

The opposition Syrian National Coalition has responded to today’s Human Rights Watch report on killings and abductions of civilians in Latakia Province in August:

The incident reported by HRW in today’s report does not represent an effort by the true Syrian opposition, but rather a shameful one-time attack by outlier extremist groups [e.g., the Islamic State of Iraq and as-Sham] that thrive under the hand of the Assad regime. It does not signify or report on a coordinated campaign by the opposition, but meanwhile the Assad regime continues its systematic attacks against civilian areas and continues to block even humanitarian assistance.

The Syrian Coalition reaffirms its willingness to provide human rights monitors, including the independent Commission of Inquiry, with free and safe access in the liberated areas of Syria.

As the regime continues to attack As-Safira, insurgents from the Liwa Al Tawheed in Abu Jarayn to the east of that town are continuing to clash with regime forces in an attempt to maintain control of an key road connecting the regime-controlled Kwaires Military Airbase to the north with an ammunition factory.

This screenshot map from Wikimapia (link here) shows the locations of Abu Jarayn, As-Safira and the Kwaires Military Airbase. 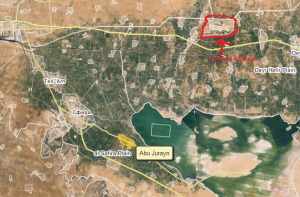 Abu Jurayn is flanked to the south by a large regime military research base.

To the immediate southwest of As-Safira is another regime military base and an air defense station. The base contains a substantial military storage area, from which Assad’s troops can move out ammunition to forces in Aleppo including in the Kwaires airbase.

Regime warplanes have launched fresh air strikes on As-Safira in Aleppo Province. Activists report that MiG jets have hit residential areas of the city with five strikes on Friday morning.

Citizen journalists in As-Safira report that the regime is dropping barrel bombs on the town. This footage, taken Friday morning, shows plumes of smoke rising after a barrel bomb was dropped by a regime warplane:

Footage from Friday shows a seven year old girl who is severely malnourished in the West Ghouta town of Moadamiyyat Ash Sham, the site of one of the August 21 chemical weapons attacks and subject to daily ferocious bombardments by regime forces as well as a regime-imposed siege.

Read EA’s interview with a resident of Moadamiyyat Ash Sham here, and our analysis of the humanitarian crisis and why the town is a key target for Assad here.

Some readers may find the images in this video disturbing.

Human Rights Watch have released a 105-page report documenting the deaths of civilians on the first day of the insurgent offensive in Latakia Province in August:

This report documents serious abuses committed by opposition forces on August 4 during their attack on the villages. Eight survivors and witnesses described how opposition forces executed residents and opened fire on civilians, sometimes killing or attempting to kill entire families who were either in their homes unarmed or fleeing from the attack, and at other times killing adult male family members, and holding the female relatives and children hostage. At the time of writing, according to opposition sources, over 200 civilians, the vast majority of whom are women and children, continue to be held by the Islamic State of Iraq and Sham (ISIS) and Jaish al-Muhajireen wal-Ansar, groups that led the opposition offensive.

The report relies heavily on Syrian military sources; however, testimony from residents and doctors also supports HRW’s conclusion of 190 civilians slain on August 4. The testimony also indicates that almost all of the civilians were unarmed and that some of them were trying to flee when they were killed.

The report identifies Islamic State of Iraq as-Sham and the mainly-Chechen group Jaish al-Muhajireen wal-Ansar as the factions still holding hostages. It is unclear, however, on which specific insurgent groups carried out the unlawful killings:

The investigation found that at least 20 distinct armed opposition groups participated in the operation…It is not clear however whether all or most of these groups were present in the villages on August 4.

The report names five of the groups — Ahrar al-Sham, Jabhat al-Nusra, and Suquor al-Izz as well as ISIS and Jaish al-Muhajireen wal-Ansar — as linked to “specific incidents that amount to war crimes”, but the evidence is far from definitive in establishing this.

Moreover, the report then reverts to a sweeping conclusion that implicates all insurgent groups — including brigades of the Free Syrian Army — despite its earlier caveat that most may not have been in the villages where the unlawful killings took place:

One of these groups [in the offensive] is the Supreme Military Council of the Free Syrian Army which is led by Salim Idriss, the Chief of Staff. Several statements from Idriss, days after the beginning of the operation, indicate that fighters under his command were participating in it days after August 4….

The coordinated nature of the overall operation in which at least 20 distinct groups participated and the number of villages affected…suggests that the crimes were premeditated and organized.

The Local Coordination Committees claim that at least 105 people were killed on Thursday, including 42 in Aleppo Province, 36 in Damascus and its suburbs, and 14 in Daraa Province.

The Violations Documentation Center records that 75,378 people have been killed since the start of the conflict in March 2011, an increase of 119 from Thursday. Of the dead, 56,237 are civilians, a rise of 94 from yesterday.