Syria, August 18: Rumors and Confusion Posing as “News”, from Homs to Ras al-Ain 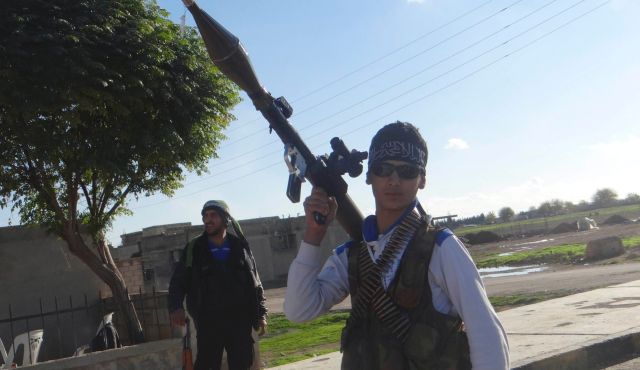 We begin Sunday with the increasingly common story of rumors, confusion, and exaggeration becoming “news” — often under scare headlines — in the mainstream media.

In a separate feature, we examine how an insurgent attack on a Syrian military checkpoint near Homs became an — unsupported — story of mass killing of “Christians” by opposition fighters.

Then there is the case of “17 Dead as Qaeda attacks Syria Kurd Town“.

The claim is that Jabhat al-Nusra attacked the town of Ras al-Ain, near the Turkish border, which has been disputed by Kurdish militia and insurgents for weeks. The assault was “part of a wider offensive” on “several Kurdish-majority areas”.

What AFP does not report is that the “al-Qaeda loyalists” are far from the only insurgent faction in the fight against the Kurdish militias YPG and Jabhat al-Akrad and the Turkish Kurdish group PKK — Ahrar al-Sham, the Islamic State of Iraq and as-Sham, and brigades of the Free Syrian Army are also involved.

It is not even clear how many people — AFP adds four Kurdish militiamen and 11 “jihadists” to the dramatic claim of two ambulance crew — were killed.

That is because AFP’s only source is the British-based Syrian Observatory for Human Rights, which — as is almost always true for its high-profile assertions — provides no support for its claims.

Far from coincidentally, the SOHR is also the only source — apart from one sentence in Syrian State news agency SANA — of “Christians” being killed by insurgents near Homs.

Amid the continued fighting in northern Lattakia Province, reports are circulating of the death of a commander of the insurgent “Katiba Abdullah bin al-Mubarak” unit, which appears to be part of the Islamist faction Liwa al-Umma :

The Ahrar al-Sham faction is claiming the downing of a regime MiG jet fighter with a Chinese FN-6 missile:

Claimed footage of the pilot parachuting to the ground:

As regime forces push to take back villages in the northern part of Lattakia Province captured by insurgents, video footage from Sunday shows regime MiG warplanes striking the village of Salma with missiles and explosive barrels:

With the opening of a border post, thousands of Syrian refugees have moved into Iraqi Kurdistan in the past week — the UN High Commission for Refugees posts this picture:

However, Karl Sharro — and those responding to this tweet — raises question about the photograph:

How come they're not carrying anything? MT @BBCWorld: Big wave of #Syria refugees cross border into Iraqi Kurdistan pic.twitter.com/1X7X0wNaS1

On Saturday, we discussed the regime’s tactic of “terror bombing” — the targeting of civilians with indiscriminate airstrikes, including the dropping of TNT-filled barrel bombs, and shelling on insurgent-controlled areas. As part of our feature, we showed amateur video from an airstrike on Aleppo’s Bustan Al Qasr neighborhood on Friday, an attack in which activists say that 30 people were killed.

Syrian Ayman, a reporter from the local activist network Halab News Agency posted these images of the aftermath of the Bustan Al Qasr airstrikes: 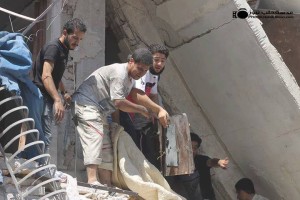 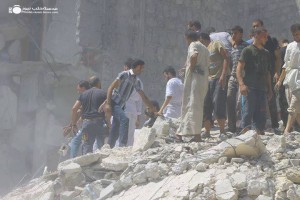 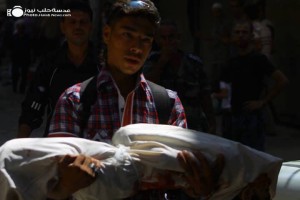 Halab News Agency have also posted extremely graphic images of some of the victims of the airstrike, who were trapped under rubble. The photos are viewable on the HNA’s Facebook page, linked above.

The Aleppo Media Center tweeted this powerful image of the attack, showing some of the destruction:

The visit of the 20-member team to three sites was agreed with the Assad regime on July 31, after months of objections by Damascus, but was delayed earlier this month because of “technical issues”.

One of the sites to be inspected is Khan al-Assal, where the regime and insurgency have accused each other of an attack on March 19. The other two sites have not been named.

In a separate feature this morning, we took apart the scary media presentation — based on rumor and unsupported claims by the British-based Syrian Observatory for Human Rights — that insurgents had deliberated targeted Christians, nine of whom were among 11 dead in an insurgent attack on a regime checkpoint west of Homs.

An EA correspondent, with excellent sources inside Syria, gives us an explanation which fits our evaluation of the incident:

Checkpoints in the area shell besieged areas of Homs City and parts of Homs Province — one of the checkpoints, targeting Zarah village and Krak de Chevaliers [a 12th-century castle], was targeted by the Free Syrian Army.

In the battle, many regime troops were killed. The FSA cannot guarantee that no civilians were casualties of stray bullets.

Because of the high number of regime forces, the FSA did not intend to hold ground. This was a hit-and-run attack to stop shelling on civilians in “liberated” areas.

The fact that the checkpoint was manned mostly by Christians and is located in a Christian neighborhood is irrelevant — the FSA targets the regime from wherever it is carrying out attacks.

Bottom line, it was just a legitimate battle, with no sectarian motives.

Meanwhile, the narrative of “Insurgents Killing Christians” was fuelled this morning by Zaid Benjamin of Radio Sawa, who sent out this tweet:

In fact, as research Phillip Smyth noted, both the photographs and the claim are old:

@zaidbenjamin These pictures have been up on pro-Assad Facebook pages for about a week.

There are claims — backed up with a photograph and a video — that some insurgents have managed to access an abandoned villa belonging to members of President Bashar al-Assad’s family in Aleppo Province.

The pro-Islamist Russian-language site Fi Syria, which is based in the Caucasus and which posts news related to Russian-speaking insurgents particularly from the Army of Emigrants and Helpers (a brigade comprising foreign Islamist fighters, mostly from the Caucasus region, and which fought with the Islamic State of Iraq and As-Sham in Menagh Airbase) posted this video on Saturday of a Russian-speaking insurgent at the villa:

Fi Syria reports that the villa was owned by three siblings of the Assad family, who gave a tip-off regarding the Menagh Airbase. The siblings were punished by Sharia Law, the website claims.

There have been reports of heavy clashes between insurgents and regime forces assisted by Hezbollah fighters in the southern Damascus neighborhood of Seyeda Zeinab.

Regime shelling on the neighborhood:

Another Sign of Currency Trouble for Regime — Exchange Company Shut Down

State news agency SANA, probably inadvertently, points to another sign of currency problems for the regime:

The authorities shut down Hawl al-Khalij currency exchange company for manipulating Syrian Pound exchange rates by trading currencies in the black market, arresting a number of the company’s employees.

In confessions broadcast by the Syrian TV on Saturday, Ammar Masbaha, one of the employees, said the company bought USD from the Central Bank and sold it in the black market instead of selling it legally to citizens, and that this was done upon instructions by the company’s owner Bashar Abu Harb who is staying in Dubai.

Earlier this month, President Assad signed a decree prohibiting any sale or purchase of foreign currency other than through official channels.

The Syrian pound has fallen from 47:1 vs. the US dollar before the conflict in March 2011 to more than 300:1 on the black market this summer.

The official rate for the Syrian pound is now 108:1, but the Central Bank — in another sign of the sharp fall in the currency — sold pounds at 175:1 in early August.

Footage posted on Saturday shows insurgents from the FSA’s 11th Brigade in Raqqa arresting civilians who are accused of stealing water and electricity.

The Local Coordination Committees claim that 92 people were killed on Saturday, including 22 in Damascus and its suburbs, 20 in Aleppo Province, 14 in Daraa Province, 12 in Raqqa Province, and 11 in Idlib Province.

The Violations Documentation Center puts the number of dead at 69,796 since the start of the conflict, a rise of 64 since Saturday. Of these, 52,707 are civilians, an increase of 35 from yesterday.

The Local Coordination Committees claim 91 people were killed on Sunday, including 18 children and 13 women.

Of the deaths, 31 martyrs were in Aleppo Province, 18 in Damascus and its suburbs, 15 in Idlib Province, and 14 in Daraa Province.

The Violations Documentation Center puts the number of dead at 69,986 since the start of the conflict, a rise of 190 since Sunday. Of these, 52,871 are civilians, an increase of 164 from yesterday.