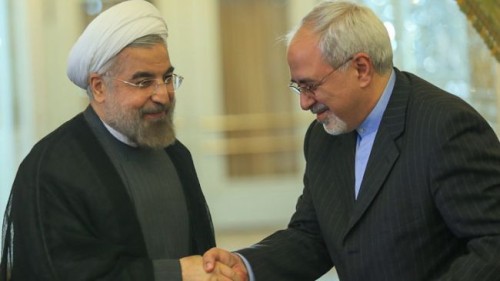 Ever since the election of President Rouhani — and, behind him, his mentor and former President Hashemi Rafsanjani — we have been anticipating a shift in Iranian foreign policy to promotion of “engagement” with other countries, including the “West” and the US.

Rouhani has borne out that prediction with statements since his inauguration, including Saturday’s declaration that “people in the June 14 elections declared that they want a new foreign policy”.

1. MODERATION WHILE STANDING ON PRINCIPLES

The new Foreign Minister’s statement echoes Rouhani’s assertion on Saturday — made at the welcoming ceremony for Zarif — “Reconsidering foreign policy doesn’t mean a change in principles because principles remain unchanged.”

Tehran will be forthcoming in seeking negotiations and dialogue with other countries, including the US, but do not expect any concessions — for example, on Iran’s right to enrich uranium or its provision of political and military support to Syrian President Assad — in advance of those talks.

“We have had numerous discussions inside the government with the President with regard to how we should pursue the nuclear rights of the country and remove the oppressive sanctions imposed upon the Islamic Republic of Iran. Our basis for work is insisting on Iran’s rights and removing the logical concerns of the international community. As the Supreme Leader and the President himself have reiterated, this is easy provided that the objective is the resolution of the nuclear issue.”

See above on the principle of the right to enrich uranium — in addition, Iran will not settle in the talks with the 5+1 Powers for anything less than the full removal of major sanctions, including restrictions on the energy and financial sectors.

And Rouhani and Zarif will ensure that, while they have room for manoeuvre on Iran’s tactics, there is no visible distance between them and the Supreme Leader.

3. ON THE POLITICAL SITUATION IN THE US

“It seems that the warmongers are concerned about the reduction of problems and are trying their hardest to find an excuse to intensify the crisis. The important point is for the decision-makers in Europe and the US to comprehend the nature and goals of the warmongers well and not allow the agenda of warmongering and tension-building – through oppressive pressures on the Iranian people which have no basis in international law – to prevent the usage of opportunities which can be used to find a solution.”

Zarif, echoing Rouhani and other Iranian politicians, is telling President Obama, “Stand up to the Congress” and pursue genuine negotiations — including sanctions relief, rather than imposition of more economic punishment.

If Obama does this, then a deal is possible.

4. BILATERAL TALKS WITH THE US?

“The Supreme Leader has stated his opinion with regard to these negotiations several times. There is no issue with negotiation itself, but the question is what issues will be discussed in these talks and how much of a political determination does exist on the other side to resolve the problems.”

See above — let’s not talk about mechanics first, but about a change in the position of the US Administration.

5. THE MIDDLE EAST — FROM SYRIA TO EGYPT

“Due to the mismanagement of certain players, which we have seen especially from outside the region during the past few years, conditions in the region are moving towards chaos and necessitate practical measures by everyone involved to contain the crisis. Fundamentalism, on one hand, and forgetting and ignoring the votes of the people, on the other, and, of course, the very clear intervention of foreign countries, have inflamed the region, the result of which is the killing of thousands of innocent people.”

A message to the “West”: pull back from support of the Syrian opposition and insurgency — otherwise, you are fomenting more bloodshed and sectarian violence.

And a message to the military and interim Government in Egypt: back off from confrontation and engage in political talks, including with the Muslim Brotherhood.