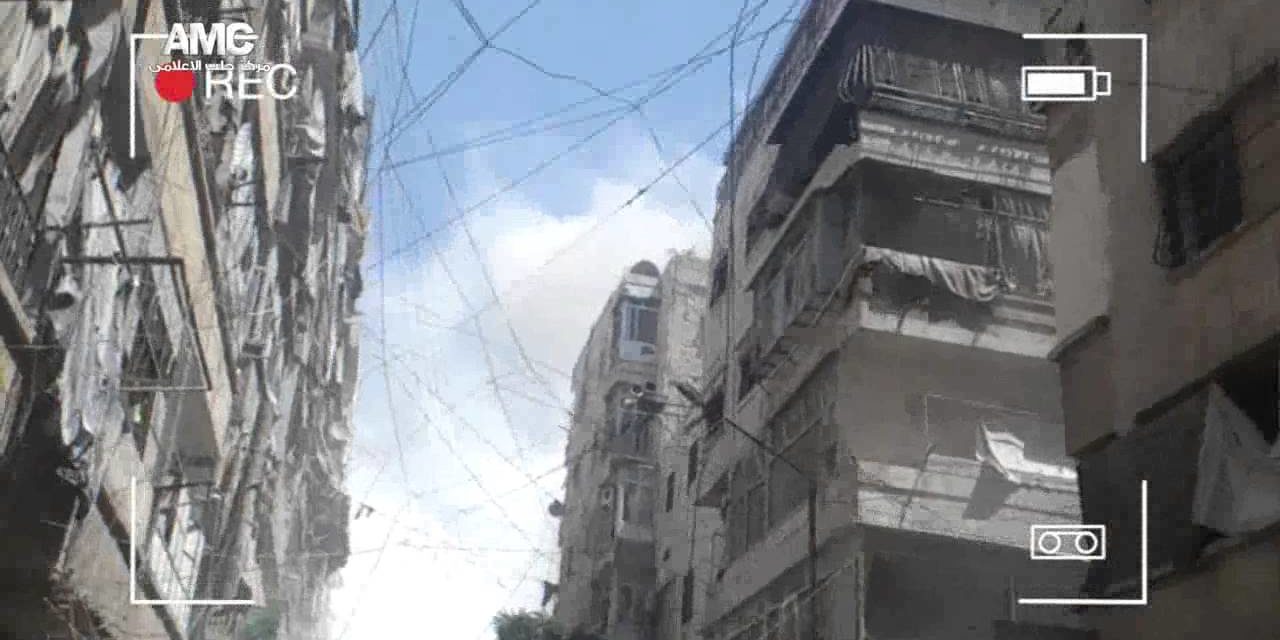 On Friday, activists posted shocking video footage of the aftermath of regime airstrikes in the Aleppo neighborhoods of Al Kallasseh and Bustan Al Qasr. Local residents watched in horror or tried desperately to help dig their friends and neighbors, some alive but some already dead, out of the rubble of residential buildings.

This short video was made by activists on Friday as a response to the bombings. It shows scenes, filmed as they unfolded, of the terror and horror caused by the bombings among local residents of the affected Aleppo neighborhoods:

This is not a new tactic, and neither of course is it restricted to Aleppo.

The regime has long used airstrikes — a deadly weapon that the insurgents do not have and cannot fight back against — not just to attack insurgent positions but to target civilians. In many cases, the regime drops barrel bombs filled with TNT — a cheap, yet deadly way of creating mass damage and striking terror into populations. Civilians have also complained that regime airstrikes have targeted not just their homes but also livestock. Other regime strikes have attacked targets of symbolic, cultural and emotional value — such as the historic Khalid ibn al-Walid mosque in Homs.

This week alone, we have seen similar reports of airstrikes against civilian targets from across Syria. In Latakia Province, where insurgents have made gains, the regime has launched heavy airstrikes against civilians and insurgents in insurgent-controlled villages like Salma. In Daraa province in the south of Syria, the regime launched airstrikes that killed civilians and destroyed homes in the insurgent-controlled towns of Nawa and Tafas. In Homs, the regime used airstrikes and shelling as both physical and psychological weapons to target neighborhoods such as Al Khalidiya. In Raqqa, Assad’s air force bombed the National Hospital this week. In Deir Ez Zor city, where insurgents made significant gains against the regime, Assad ordered airstrikes that targeted residential areas.

Why would Assad order airstrikes on civilians? Previously, the regime has accused insurgents of cynically using civilians as “human shields”, by hiding out in densely populated civilian areas.

However, in a report in April, Human Rights Watch offered a different explanation, saying that at least 4,300 people had died in regime airstrikes since the conflict began, and accusing the Assad regime of indiscriminate and sometimes deliberate airstrikes against civilians.

HRW researcher Ole Solvang told AP that “The aim of the airstrikes appears to be to terrorize civilians from the air, particularly in the opposition-controlled areas where they would otherwise be fairly safe from any effects of fighting.”

The airstrikes form a pattern. In the past two weeks we have seen that whenever insurgents make a gain, Assad has ordered shelling and airstrikes indiscriminately in the towns and villages taken by insurgents — demonstrating that the regime is using the strikes as a tactic to fight back against the gains, not by targeting insurgents but by terrorizing local populations as a form of collective punishment, presumably in the hope of causing instability by making residents fear remaining under insurgent control.

Similarly, Assad has used airstrikes to terrorize populations in insurgent-controlled areas of cities like Aleppo.

Below, we take a look at just a small fraction of the video evidence of the death and destruction caused by these “terror bombings”. Warning — All of the videos are emotionally shocking, some contain graphic images of dead and dying civilians.

This father lost his family as a result of the bombing:

Smoke rises from the Aleppo neighborhood of Al Kallaseh after Assad orders airstrikes on Friday:

Civilian panic after Friday’s airstrike. A large part of a building has collapsed, burying civilians underneath rubble:

A bulldozer clears away some of the rubble as desperate civilians try to pick through the debris to find survivors:

Destruction in Bustan Al Qasr, an insurgent-held neighborhood of Aleppo, on Friday after a regime strike:

Civilians in Bustan Al Qasr panic in the immediate aftermath of the strike:

Immediately after the attack:

Following the insurgent capture of Salma in Lattakia Province, Assad ordered airstrikes against the village. On Thursday, local activists said that over 20 targets in the village had been hit by warplane and helicopter strikes:

Scenes from Wednesday after an airstrike in Salma, which trapped two young men under the rubble.

The regime has ordered several airstrikes on Nawa ever since insurgents overran a checkpoint and captured most of the town last month. On Saturday, activists in Nawa report that regime warplanes are targeting several areas of the town.

Damage after a MiG warplane targeted civilian homes in Nawa, which was captured by insurgents last month:

Civilians survey damage after homes destroyed by a MiG airstrike:

Airstrikes on the Al Hawiqah neighborhood, which was captured by insurgents a week ago: