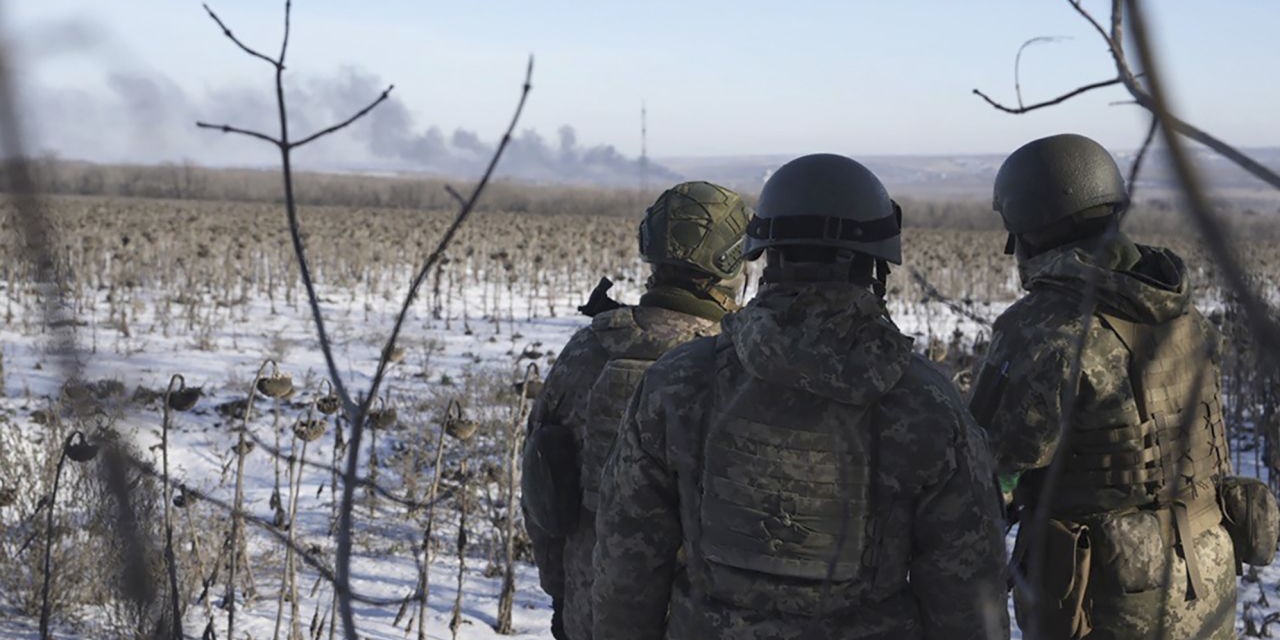 Thursday’s Coverage: Battle Tanks On The Way to Kyiv

Yevgeny Prigozhin, the head of the Wagner Group mercenaries, has continued his feud with the Russian Defense Ministry today (see also 1054 GMT).

Prigozhin complained about “infighting, corruption, bureaucracy and officials who want to stay in their positions”, with constant attempts to “steal victory” from Wagner.

The Defense Ministry replied with an attempt to appease Prigozhin, issuing a statement to clarify the situation: “As for the direct storming of Soledar’s city quarters occupied by the armed forces of Ukraine, this combat task was successfully accomplished by the courageous and selfless actions of volunteers from the Wagner assault detachments.”

Taras Berezovets, a captain in the Ukrainian Special Forces First Brigade, said paratroopers from the 77th and 46th Brigades are still on the western outskirts of Soledar.

He explained that staying in the center of the town made no military sense: “[It is] completely destroyed. There is no single building which survived Russian shelling.”

Berezovets said units are remaining as long as possible to kill Russia’s Wagner mercenaries, but he expects a decision to withdraw in the coming days.

Bearing out the assessments of analysts, he said withdrawal from Soledar will affect the ability of Ukrainian forces to resupply the city of Bakhmut, 10 km (6 miles) to the southwest. Two major roads into Bakhmut remain in Ukrainian hands and Ukrainian jets are bombing Russian positions.

This is how the entrance to the famous "Artemsil" plant in #Soledar looks like today. pic.twitter.com/llmzwDB11C

The Ukraine President’s Chief of Staff, Andriy Yermak, has used the bloody World War I battle of Verdun to describe the Russian assault on Soledar in the Donetsk region.

The situation is difficult, even very difficult. This is the battle of Verdun in the 21st century. The fighting has been going on for several months, but our fighters manage to hold their positions.

The Russians release criminals from prisons who die as soon as they reach the frontline. Their bodies are left in place, they are not even removed, there are many human losses on the Russian side, much more than ours. We clearly value the lives of our soldiers more.

But before us is a human mass that is constantly attacking, attacking, attacking. Soledar is a place of street battles, wherever one of the parties does not control the city. The Russians are there, but they do not control the city. The situation is complicated, but our goal is to liberate our territories, fully restore the territorial integrity of Ukraine.

In a post on Telegram, Ukraine Deputy Defence Minister Hanna Malyar has updated on the fighting in Soledar in the Donetsk region.

The night in Soledar was hot, battles continued. The enemy threw almost all the main forces in the direction of Donetsk and maintains a high intensity of offensive. Our fighters are bravely trying to maintain the defense. This is a difficult phase of the war, but we will win. There is no doubt.

The Russian Defense Ministry claims the conquest of Soledar was “completed” on Thursday night.

Serhiy Cherevaty, spokesman of the Eastern group of the Ukrainian army, responded, “The statements of the Russian MoD about the capture of the city are not true. There are battles in Soledar.”

Meanwhile, the in-fighting in Moscow over the operation continues.

The mercenary Wagner Group sneered at the Defense Ministry’s assertion that regular Russian military forces were involved in the assault.

Two men, faces obscured, wearing fatigues and standing in what appears to be an underground bunker, say by flashlight in the video:

The Defense Ministry said on Wednesday, “Airborne Troops have blocked Soledar from the northern and southern parts of the city. The Russian Aerospace Forces strike at enemy strongholds. Assault squads are fighting in the city.”

On Wednesday, a member of the Russian Human Rights Council, confirmed that Vladimir Putin has signed a decree authorizing pardons for Russian convicts put on Ukraine’s frontlines by the Wagner Group of mercenaries.

A scene from Russia yesterday….

A Wagner fighter who answered Prigozhin’s call to fight in Ukraine while serving a lengthy jail term for beating his elderly mother to death in a drunken frenzy has now received a "hero’s funeral"https://t.co/TWlQ1HU0fW pic.twitter.com/uz5JsZSc2W

ORIGINAL ENTRY: Russian forces finally control most of the small town of Soledar in the Donetsk region in eastern Ukraine.

However, analysts notes that the advance, achieved after more than five months of costly assaults, is “operationally insignificant” for Vladimir Putin’s 10 1/2-month invasion.

Instead, its importance lies in a symbolic Russian victory, the first since last summer, in the face of Ukraine’s liberation of territory in the east, northeast, and south. And it brings personal and possibly financial benefit to Yevgeny Prigozhin, the head of the Wagner Group mercenaries who have led the assault.

Video footage posted on Wednesday and Thursday indicates that Russians now occupy most of Soledar, which had a pre-war population of about 11,000 and where 563 residents still remain. Russian milbloggers posted clips of Wagner Group fighters walking about in the town, and Kremlin spokesman Dmitry Peskov praised the “heroic” troops for successful operations. A Russian proxy official in the Donetsk region, Lt. Col. Andrey Baevsky, said there were still “small pockets of resistance” inside the town.

In his nightly address to the nation, Ukraine President Volodymyr Zelensky did not acknowledge the Russian advance, saying instead:

Soledar is 10 km (6 miles) north of Bakhmut, a salt-mining city which the Russians have tried to overrun since last May.

The US-based Institute for the Study of War reiterated on Wednesday, “The Russian discussion about the imminent capture of Bakhmut and the collapse of Ukrainian defensive lines are divorced from the current operational reality in the Bakhmut area, where Russian forces remain far from severing Ukrainian ground lines of communication needed to encircle Bakhmut.” 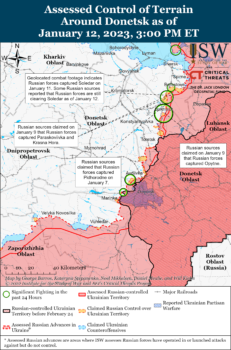