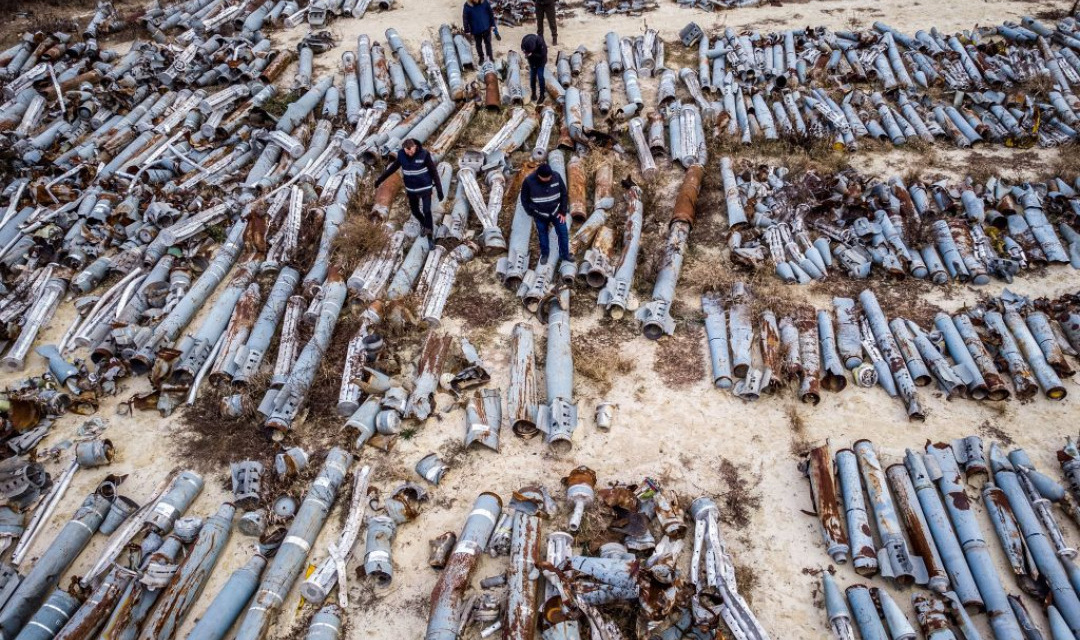 Staff of the Ukraine Prosecutor’s office examine remnants of Russian missiles and shells fired on the city of Kharkiv, December 7, 2022 (Aleksey Filippov/AFP/Getty)

The Ukrainian military claims a strike killing at least 14 Russian troops in Rubizhne in the Luhansk region in eastern Ukraine.

The Russian Defense Ministry says its forces hit a building with more than 600 Ukrainian troops in Kramatorsk eastern Ukraine, but it gave no support for the assertion.

The mayor of Kramatorsk said earlier on Sunday that nobody was killed in an attack on buildings in the city.

Ukrainian forces “are all spread in smaller groups across various locations”, noted Artem Mazhulin of The Guardian on a recent trip to the frontline in the Donetsk region. And in Ukraine, with an open media and a large international contingent of reporters, there has been no indication of an incident causing mass casualties.

Reporters from Reuters visited the two college dormitories that the Russian Defense Ministry said were housing Ukrainian servicemen close to the frontline. Neither appeared to have been directly hit by missiles or seriously damaged. There were no obvious signs that soldiers were living there, let alone of bodies or traces of blood.

On New Year’s Day, Ukraine used US-supplied rockets in a strike on a converted barracks in Makiivka in the Donetsk region, killing and wounding hundreds of Russian troops.

The consequences of the strike on Kramatorsk on the day of the "truce" announced by Putin.

2 educational institutions, 8 apartment buildings and garages were damaged. According to the mayor of the city Alexander Goncharenko, there were no casualties. pic.twitter.com/CW78i80Bvx

The US has sanctioned another Iranian manufacturer, amid Tehran’s supply of drones to Russia for its attacks on Ukraine.

Six executives and board members of Iran’s Quds Aviation Industries were cited over the unmanned aerial vehicles.

The founder of the Wagner Group mercenaries, Yevgeny Prigozhin, has explained why Russia has thrown wave after wave of troops for eight months at Bakhmut in eastern Ukraine — it is atop a “network of underground cities”.

As Prigozhin seeks more power and influence within the Kremlin, in a rivalry with military commanders and Defense Minister Sergey Shoygu, he has been more provocative in his statements and made frontline visits in the Donetsk region in the east.

He declared on Saturday, “The cherry on the cake is the system of Soledar and Bakhmut mines, which is actually a network of underground cities. It not only [can hold] a big group of people at a depth of 80-100 metres, but tanks and infantry fighting vehicles can also move about.”

A US official said last week that Prigozhin has another motive: to control the lucrative salt and gypsum mines near Bakhmut.

Despite Vladimir Putin’s “ceasefire”, Russian forces killed one civilian and injured eight on Saturday in Bakhmut, near the frontline in eastern Ukraine.

In the Kharkiv region in northeast Ukraine, one person was killed and two injured by attacks on the town of Merefa. Two other settlements were shelled.

Attacks were also reported last night in the Kherson region in southern Ukraine.

The officials say a woman was killed and other people injured
from the attacks on the plants in Zuhres and Novyi Svit.

Reznikov published an infographic detailing that Russian forces have expended 81% of their strategic missiles.

The Russian Defense Ministry had boasted on December 29 that it would never run out of the Kalibrs, fired from warships in the Black and Caspian Seas. But the sea-based missiles were last used in Russia’s waves of attacks on December 16.

Security formula:
The missile power of the “world's second army” is inversely proportional to the strictness of sanctions compliance multiplied by the strength of Ukrainian air defense. pic.twitter.com/nYoQJYzvjq

Reznikov also posted a table detailing Russia’s limited production of strategic missiles since the start of the February 24 invasion. For example, only 36 Iskander 9M723s — 5% of pre-war stock — have been manufactured.

While the Russians have most of their pre-invasion tactical missiles, S-300s and 3M-55 Onyxs are far less precise than Russian strategic missiles. That jeopardizes Moscow’s objective of destroying critical infrastructure.

The Russians have also expended 88% of the Iranian Shahed “kamikaze” drones delivered to them since last summer. Reznikov said that of the many hundreds supplied by Tehran, only 90 remain.

Russia had carried out waves of strikes with missiles and drones since October 10. At one point the attacks knocked out half of Ukraine’s power grid.

However, the waves have had diminishing effects. More than 80% of missiles and almost all drones have been downed. In the last assault, over the New Year’s weekend, there was no serious damage to infrastructure and all drones — more than 80 — were hit before reaching their targets.

Ukrainian officials estimated that Moscow has enough missile supply for two or three more major strikes. However, the US-based Institute for the Study of War notes that, with the less accurate tactical missiles, Russian forces will be able to continue their campaign against Ukrainian infrastructure at scale in the near term and threaten the lives of Ukrainian civilians”.