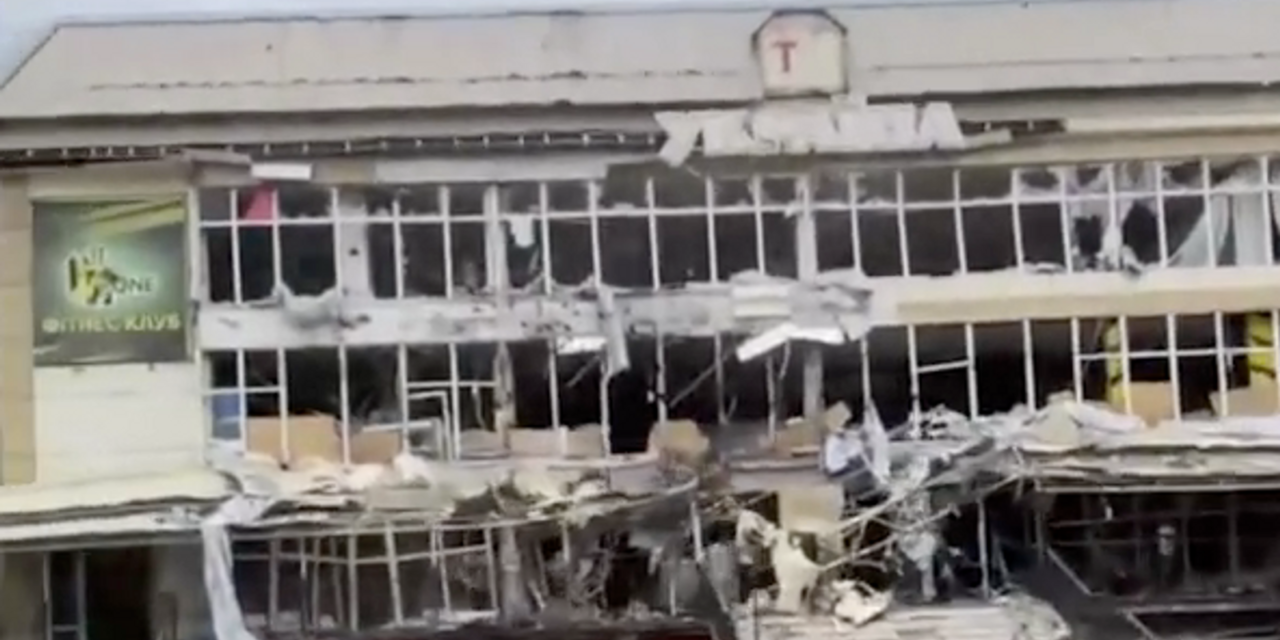 A scene from the ongoing fighting near Bakhmut in the Donestk region in eastern Ukraine….

Officials at a college in eastern Ukraine have further buried the disinformation of Russia’s Defense Ministry that 600 Ukrainian troops were killed in a Russian attack on Sunday (see 0822 GMT).

The Defense Ministry said the slain troops were in two college dormitories in Kramatorsk in the Donetsk region. However, Yana Pristupa, the college’s deputy director, said:

Nobody saw a single spot of blood anywhere. Everyone saw yesterday that no one carried out any bodies. It’s just people cleaning up.

Pristupa said the college had more than 300 students — and no soldiers — on the campus. Many candidates, most of them studying mechanical engineering, have been taking lessons online after Russia’s invasion.

Two women have been killed and seven other civilians, including a 13-year-old girl, have been wounded by a Russian attack on a market in the Kharkiv region in northeastern Ukraine.

Regional officials said the Russians used a S-300 missile in the assault.

russian occupiers shelled a local market in #Kharkiv region. Child among seven victims. Every day brings evidence of #genocide in the middle of Europe. pic.twitter.com/L8qu66m93F

Rescuers of #Kharkiv region take people out from under the rubble after another #Russian barbaric attack. pic.twitter.com/o6VEq9aY3H

Russian “milbloggers” — commentators on social media about military matters — are mocking the Defense Ministry over the claim of a Russian strike killing 600 Ukrainian troops.

Reeling from Ukrainian rocket attacks on January 1 that caused hundreds of Russian casualties in eastern Ukraine, the Defense Ministry asserted that its forces destroyed a building in Kramatork in the northern Donetsk region.

But the mayor of Kramatorsk and other Ukrainian officials said no one was killed in an attack on buildings in the city. Reuters reporters toured the site which the Defense Ministry said was demolished — they found no evidence that soldiers were living there, let alone bodies or traces of blood.

Several foreign journalists in #Kramatorsk found no confirmation of the #Russian Ministry of Defense's claims that hundreds of #Ukrainian servicemen were killed as a result of the missile strike. Thus, none of the dormitories in Kramatorsk mentioned by #Moscow were damaged. pic.twitter.com/WcvNpBATCO

Milblogger “Military Informant”, with more than 500,000 followers, posted on Telegram:

It is not clear to us who, and for what reason, decided that 600 Ukrainian soldiers died inside, all at once, if the building was not actually hit (even the light remained on).

Instead of the real destruction of the enemy personnel, which would have been a worthy response, an exclusively media operation of retaliation was invented.

Russian attacks across nine Ukrainian regions in the past 24 hours have killed two civilians and injured at least 12.

Shelling was reported in the Donetsk, Kherson, Kharkiv, Chernihiv, Dnipropetrovsk, Sumy, Mykolaiv, Zaporizhzhia, and Luhansk regions in the east, south, and north of Ukraine.

The Russian Government has banned maps which do not conform to the Kremlin’s view of “territorial integrity”.

The Government supported a legislative amendment classifying as extremist materials “cartographic and other documents and images that dispute the territorial integrity of Russia”.

The legislation was tabled because some maps in Russia do not depict Russian-occupied Crimea in Ukraine and the Kuril Islands, disputed between Moscow and Tokyo, supposedly violate “territorial integrity”.

ORIGINAL ENTRY: President Volodymyr Zelenskiy has told the nation that Bakhmut, in the Donetsk region in eastern Ukraine, is still “holding on” amid the eight-month Russian assault to overrunthe city.

Heavy battles are ongoing in the Luhansk region and the Donetsk region – every hotspot in these directions is well known. Bakhmut is holding out despite everything. And although most of the city was destroyed by Russian strikes, our soldiers repel constant attempts of Russian offensives there.

Soledar is holding out. Although there is even more destruction there, and it is very difficult.

Earlier in the day Deputy Minister of Defense Hanna Maliar said of the “difficult” situation: “In some areas of Donetsk region, we are moving forward little by little, step by step. Whereas in some areas, the enemy is advancing.”

Maliar indicated that the Russian advances were near Soledar, which a population of about 11,000 before the Russian invasion.

The Ukraine military added on Monday, “The enemy again made a desperate attempt to storm the city of Soledar from different directions and threw the most professional units of the Wagnerites [Wagner Group mercenaries] into battle.”

Military analysts assess that even if the Russians could finally occupy the small town, it would not enable them to surround and besiege Bakhmut — a city of 70,000 before the February invasion where about 12,000 residents remain.

And both UK military intelligence and the US-based Institute for the Study of War have concluded in recent days that the Russians, amid heavy losses and problems with organization and supply lines, no longer have the troop strength to occupy Bakhmut. The analysts say Russian forces are generally operating in small units of about 15 infantry.

The Russians have tried to overrun Bakhmut, which arose with its salt mines, since May. They have continued the assault even though the city lost much of its strategic significance when Ukraine’s counter-offensive liberated the neighboring Kharkiv region and part of Donetsk in September.

Wagner Group founder Yevgeny Prigozhin, who is trying to eclipse rivals in Moscow including Defense Minsiter Sergey Shoygu, claimed on Saturday that Bakhmut had to be conquered as a military position.

The cherry on the cake is the system of Soledar and Bakhmut mines, which is actually a network of underground cities. It not only [can hold] a big group of people at a depth of 80-100 meters, but tanks and infantry fighting vehicles can also move about.

A US official said last week that Prigozhin has another motive: to control the lucrative salt and gypsum mines near Bakhmut.

Zelenskiy also spoke of Russian attacks on Friday and Saturday, despite Vladimir Putin’s proclamation of a 36-hour ceasefire for Orthodox Christmas.

Russian forces killed one civilian and injured eight on Saturday in Bakhmut. In the Kharkiv region in northeast Ukraine, one person was killed and two injured by attacks on the town of Merefa. Two other settlements were shelled. Shelling was also reported in the Kherson region in southern Ukraine.

The world has seen again these days that Russia lies even when it draws attention to the situation at the front with its own statements.

Russian shelling of Kherson with incendiary ammunition right after Christmas. Strikes on Kramatorsk and other cities of Donbas — on civilian objects and exactly when Moscow reported on the alleged “silence” of their army.