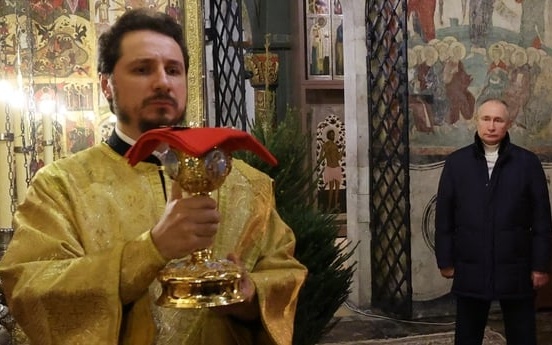 Vladimir Putin is the lone attendee at an Orthodox Christmas Eve service in the Cathedral of the Annunciation, Moscow, Russia, January 6, 2023

I joined Times Radio’s Anna Cunningham yesterday to explain why Vladimir Putin declared a 36-hour “ceasefire” in his invasion of Ukraine from noon on Friday.

Far from marking Orthodox Christmas, Putin was “trying to change the news cycle so we don’t talk about those ongoing Russian missile attacks, including the killing of Ukrainian civilians”.

And he was also trying to divert attention from a series of setbacks — and the possibility of defeat — of his invasion, including:

The New Year’s Day barracks attack showed Russia’s vulnerability as Ukraine gets more assistance from the West. And Vladimir Putin certainly doesn’t want to talk about that, because there are a lot of people inside Russia who are upset, including some who are challenging the military leadership.

How and Why Putin’s Ukraine Invasion Failed