Ukraine War, Day 315: Anger and Grief Within Russia Over 100s of Troop Casualties in Makiivka 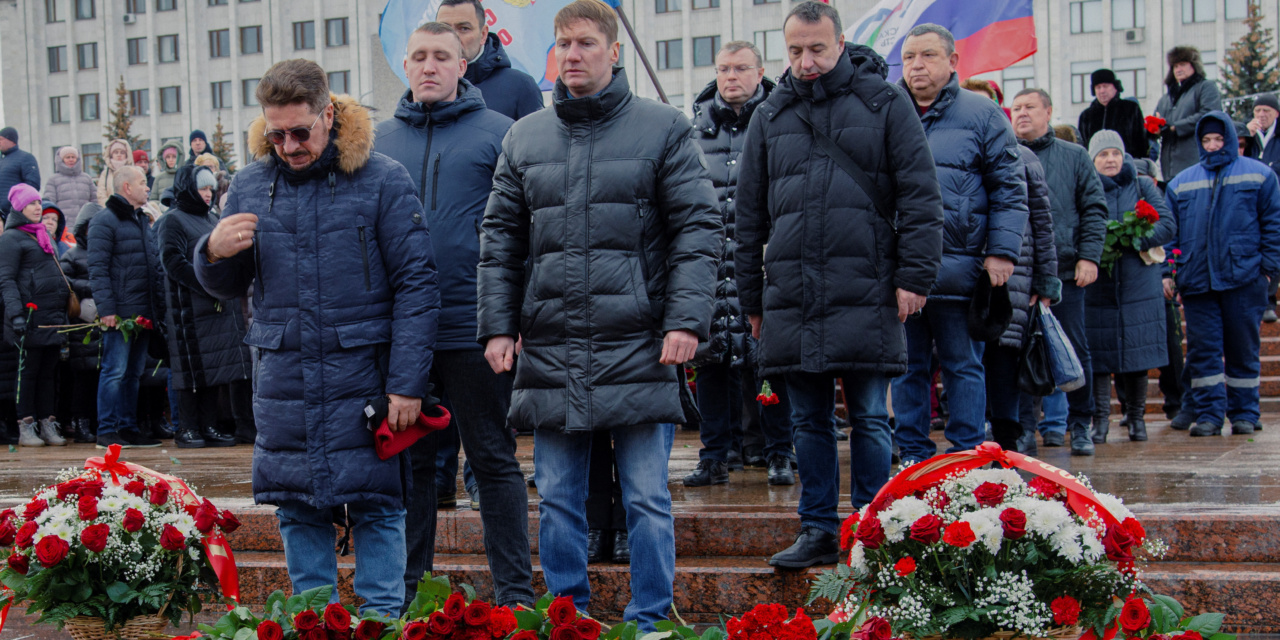 Tuesday’s Coverage: Up to 400 Russian Troops Killed in Destroyed Barracks 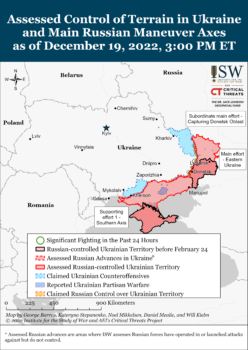 UK military intelligence has amplified the claim of Russian military observers that commanders were storing ammunition next to the destroyed barracks in Makiivka, where at least 89 and up to 400 troops were killed by Ukrainian rockets (see Original Entry).

The building was only 12.5 km (7.8 miles) from the Avdiivka sector of front line, one of the most intensely contested areas of the conflict.

The Russian military has a record of unsafe ammunition storage from well before the current war, but this incident highlights how unprofessional practices contribute to Russia’s high casualty rate.

A scene from Bakhmut in the Donetsk region in eastern Ukraine — Russian forces have tried, and failed, to overrun the city since May….

In his nightly address to the nation, Ukraine President Volodymyr Zelenskiy has repeated the warnings of his officials that Russia may attempt a major offensive in early 2023.

We have no doubt that current masters of Russia will throw everything they have left and everyone they can round up to try to turn the tide of the war and at least delay their defeat.

We have to disrupt this Russian scenario. We are preparing for this. The terrorists must lose. Any attempt at their new offensive must fail.

This will be the final defeat of the terrorist state.

ORIGINAL ENTRY: Russians expressed anger and grief on Tuesday as news spread of hundreds of troop casualties in the destruction of a barracks in eastern Ukraine.

Using US-supplied HIMARS rockets, the Ukrainian military shelled a converted school building in occupied Makiivka, in the Donetsk region, just after midnight on New Year’s Eve. “We are cleaning their brains off our boots,” said one survivor of his colleagues, as others fled through a basement, “walking around naked in flip flops”.

On Monday, Ukrainian officials said up to 400 Russians were killed.

The Russian Defense Ministry initially made no comment as a Russian proxy official in Donetsk spoke of a “massive blow” with “dead and wounded”. Hours later, Moscow acknowledged 63 fatalities.

Just after 1 a.m. on Wednesday, a video statement from the Defense Ministry raised the death toll to 89. Lt. Gen. Sergey Sevryukov blamed the dead and wounded troops:

Currently, a commission is working to investigate the circumstances of what has happened.

But it is already obvious that the main reason … was the turning on and massive use by personnel of mobile phones within reach of enemy weapons contrary to the ban.

Russia retaliated with airstrikes on Druzkivka in Donetsk. The Defense Ministry proclaimed — with no evidence — that the attacks on a “hardware concentration” killed up to 200 Ukrainian personnel and destroyed four HIMARS launchers and more than 800 rockets.

Ukrainian outlets showed the destruction of an ice hockey arena, used for storing supplies for civilians. Two people were wounded.

Calls for Vengeance and Accountability

Mourners gathered throughout Russia on Tuesday, laying roses and wreaths for the slain.

In the city of Samara in southwest Russia, home of some of the victims, about 200 people gathered as an Orthodox priest recited a prayer and soldiers fired a gun salute.

Ekaterina Kolotovkina, the wife of a general, told the ceremony, “It’s very tough, it’s scary. But we cannot be broken. Grief unites.”

She said she had asked her husband to carry out vengeance: “We will crush the enemy together. We are left with no choice.”

Others looked for answers within the Russian establishment, as “milbloggers” — some embedded with the armed forces — continued to criticize the leadership.

“What conclusions will be drawn? Who will be punished?” wrote Mikhail Matveyev, a member of the Russian parliament representing Samara.

The military-linked Telegram account Rybar, with about a million followers, called for accountability. One post said it was “criminally naive” for the army to store ammunition next to sleeping quarters in the barracks.

Military blogger Vladlen Tatarsky, who met Vladimir Putin in the Kremlin in September, called for a tribunal for the “untrained idiots” in the Russian military leadership.

Politicians and bloggers pushed back against the Defense Ministry’s blame of Makiivka’s victims. Andrey Medvedev, the deputy chairman of the Moscow city parliament, said the response was “predictable”: “Well, of course. It is not the commander who gave the order to place personnel in the vocational school building that is to blame.”

The military-linked Grey Zone channel posted on Telegram that the Ministry’s statement about mobile phone use is “99% a lie” and “an attempt to throw off the blame”. The channel and other commentators said locals in the Makiivka area probably gave the Ukrainian military the intelligence needed for the attack.

Putin has not issued any comment about the losses.