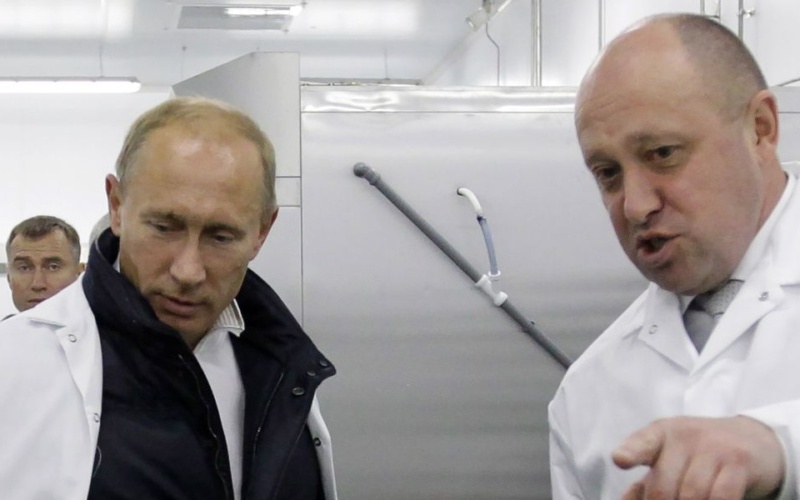 Netherlands is following the US in the provision of a Patriot air defense system to Ukraine.

Prime Minister Mark Rutte confirmed the delivery as he met US President Joe Biden in the White House.

The death toll from Saturday’s Russian missile destruction of a Dnipro apartment block has risen to 45, including six children, after the body of another child was found.

At least 19 people are missing.

Grieving granddad in Dnipro shows a video of his one-year-old grandson: “This little child is still lying under the rubble”. pic.twitter.com/CLVLCLbSZ4

Russian shelling has demolished an educational building in eastern Ukraine.

The premises of the educational institution were almost destroyed. There were no casualties – Head of Kharkiv Regional Military Administration Oleh Syniehubov. pic.twitter.com/44jFr9M9Uq

A scene from Moscow….

A makeshift memorial has appeared in Moscow to the 40 Ukrainians killed in the Russian missile strike on Dnipro, with a framed photo of the demolished apartment block placed beside a monument to Ukrainian poet Lesya Ukrainka. Russian TV has been largely silent about the tragedy. pic.twitter.com/ukwilL7YwB

The European Union has released €3 billion ($3.25 billion) in financial aid to Ukraine, the first tranche of an €18 billion ($19.5 billion) fund authorized by the 27-member bloc last month.

The aid will be used for public sector wages, pensions, and the operations of schools and hospitals.

European Commission President Ursula von der Leyen said at the World Economic Forum in Davos, Switzerland, “We are in it for as long as it takes and stand by our Ukrainian friends.”

Ukrainian officials say they need about $5 billion per month for basic services. The EU expects to disburse €1.5 billion ($1.63 billion) a month.

Ukraine received the 1st €3 billion from the new €18 billion macro-financial program. I’m grateful to the EU & President @vonderleyen for the strong support. Preserving 🇺🇦’s financial stability is vital for our joint victory over the aggressor #РазомПереможемо #StandWithUkraine

The death toll from Saturday’s Russian missile strike on a Dnipro apartment building has risen to 44, says Mayor Borys Filatov.

The death toll in Sunday’s grenade explosion on a military base in western Russia has risen to seven.

Emergency services said a sergeant accidentally detonated a hand grenade in sleeping quarters as he tried “to gain authority in front of his subordinates”, setting off an explosion of ammunition.

The death toll from Saturday’s Russian missile strike on a Dnipro apartment block has risen to 41 with the discovery of the body of a child this morning.

Another 73 people were injured, including 16 children. Rescuers pulled 39 people, including six children, from rubble.

The UN’s Office of the High Commissioner for Human Rights says it has confirmed the killing of 7,031 civilians during Russia’s invasion.

The office issued its standard caveat that the actual toll is likely to be “considerably higher” given the difficulty of verifying casualties in occupied areas and on frontlines.

Of the confirmed deaths, 6,536 were in Ukraine-held areas and 495 recorded in Russian-occupied territory.

Speaking at the World Economic Forum in Davos, Switzerland, Ukraine Presidential Chief of Staff Andriy Yermak said more than 9,000 civilians, including 453 children, have been killed.

“We will not forgive a single [act of] torture or life taken. Each criminal will be held accountable,” said Yermak.

ORIGINAL ENTRY: The Kremlin has publicly pushed back against the campaign of Yevgeny Prigozhin, the founder of the Wagner Group mercenaries, for more power and influence.

Prigozhin has used Vladimir Putin’s invasion of Ukraine to bring Wagner — involved in Russian military operations from Syria to Mali to the Central African Republic — out of the shadows. He pressed for changes in military command as Russia suffered defeats last autumn in Ukrainian counter-offensives in the northeast and south, and took credit for the holding of defensive lines.

But the man once known as “Putin’s chef” may have crossed a line with a high-profile campaign in eastern Ukraine this month. After a series of videos from the frontline, he claimed that Wagner Group fighters were exclusively responsible for Russia’s occupation of the small town of Soledar in the Donetsk region. Prigozhin also

Prigozhin also aimed at rivals in Moscow, claiming that “infighting, corruption, bureaucracy and officials who want to stay in their positions” were trying to “steal victory” from Wagner.

The Russian Defense Ministry pushed back, saying that regular forces were involved in Soledar. More importantly, the Kremlin reshuffled the military command, named the Chief of Staff of the Russian Army, Gen. Valery Gerasimov, as overall commander of the invasion. Gerasimov’s predecessor, Gen. Sergey Surovikin — Prigozhin’s favorite — was demoted to a deputy role.

On Sunday, Putin intervened for the first time over Soledar. Responding on State TV to a question — likely planted — he attributed the advance to the Defense Ministry of Defense and the plans of the General Staff.

In its Sunday briefing, the Defense Ministry pointed excluded any mention of Wagner, as it said regular infantry and airborne troops are attacking Ukrainian positions around Bakhmut, 10 km (6 miles) south of Soledar.

On Monday, Kremlin spokesperson Dmitry Peskov said reports of in-fighting are “products of information manipulations” by Russia’s “enemies”. However, he added that the Kremlin also has “friends” who are culpable.

Prigozhin responded by saying that he had no reason to not trust Peskov. But the mercenary leader did not deny the reports of the in-fighting.

1/ Wagner Group head Yevgeny Prigozhin has posted a video, apparently filmed in or near Soledar, in which he praises the capabilities and skills of Wagner fighters, implicitly casting them as superior to the regular Russian military. Translation below. ⬇️pic.twitter.com/qwfXC1EZIk

Meanwhile, the Defense Ministry tried to promote the authority of Defense Minister Sergey Shoygu with the claim that he visited commanders in eastern Ukraine. However, it gave no location for the video or verification that it was from the frontline.

#Shoigu inspected the occupiers in the combat zone, the #Russian Defense Ministry reports.

As usual, the propagandists posted the video without sound. pic.twitter.com/d2TzdHmxdT

Wagner Group commander Andrey Medvedev, 26, has deserted and is seeking asylum in Norway.

Medvedev crossed the border just before 2 a.m. last Friday. He was arrested and detained by border guards.

Medvedev’s Norwegian lawyer Brynjulf Risnes said Medvedev is being held in Oslo at a “safe place”. He faces a charge of illegally entering the country; however, that will be dropped if asylum is granted.

Risnes said, “He has declared that he is willing to speak about his experiences in the Wagner Group to people who are investigating war crimes.”

He said Medvedev claimed to have been a unit commander in charge of between five and 10 fighters.