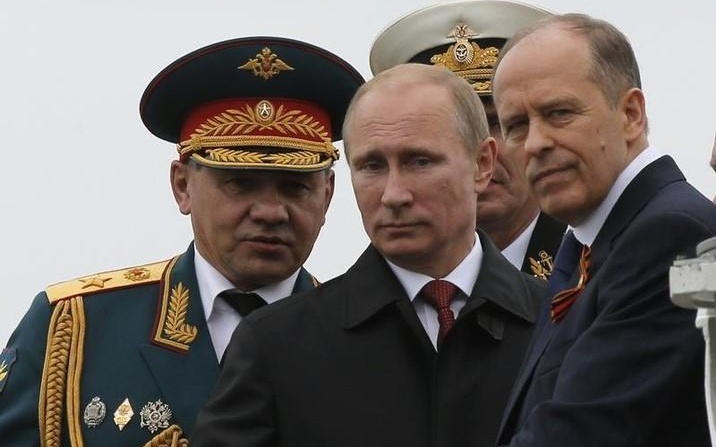 Russia’s Defense Ministry says two of its airbases, well back from the Ukraine border, have been hit in Ukrainian drone strikes.

The all clear has been sounded across Ukraine. President Volodymyr Zelenskiy said air defenses shot down most of the Russian missiles — the Ukraine military said more than 60 of the more than 70 launched — and workers have already begun restoration of power supplies.

Kyiv region governor Oleksii Kuleba said 40% of consumers are without power. While some infrastructure was hit, there were no “critical consequences”.

Damage is also reported in the Odesa region in southern Ukraine. Moldovan police found fragments of a missile that landed across the border in northern Moldova near the village of Briceni.

At least two people have been killed in the Zaporizhzhia region by today’s Russian missile strikes.

Several houses were destroyed in the attack. A Zaporizhzhia city official said some Russian missiles had been shot down.

Power has been knocked out in the Sumy region in northern Ukraine.

Medics and staff at children’s hospitals in southern Ukraine have explained how they saved infants from deportation to Russia.

Within hours of Russia’s February 24 invasion, the staff of a hospital in the Kherson region began fabricating orphans’ medical records.

“We deliberately wrote false information that the children were sick and could not be transported,” says Dr. Olga Pilyarska, head of intensive care at the facility. “We were scared that [the Russians] would find out…[but] we decided that we would save the children at any cost.”

As they occupied areas such as Kherson, Russian forces seized at least 1,000 children from schools and orphanages. A local aid group tried to hide juveniles in a church but the Russians found them several months later, returned them to the orphanage, and then deported them.

Staff at the Kherson hospital invented diseases for 11 abandoned babies under their care, so they would not have to return them to the orphanage. One baby had “pulmonary bleeding”, another “uncontrollable convulsions”, and another needed “artificial ventilation”.

In the village of Stepanivka, Volodymyr Sahaidak, the director of a center for social and psychological rehabilitation, falsified paperwork to hide 52 orphaned and vulnerable children.

He placed some of the children with seven of his staff, and some older juvenies stayed with him. Others were taken to distant relatives.

Ukrainian air defences have downed incoming Russian missiles: four in the Kharkiv region in the northeast, one in Dnipropetrovsk in south-central Ukraine, and one in Poltava in the center.

Explosions are reported in the Odesa, Zaporizhzhia, and Mykolaiv reigons. Power is out in parts of the Zhytomyr region.

Children sheltering across the country:

Russia is launching another missile barrage across Ukraine, 12 days after its last mass strikes.

There are reports of more than 100 air-launched and sea-launched missiles.

Such a number of personnel increased the threat for us and these are not just words – these are new brigades, new battalions that have been trained. This is the replenishment that the [Russian] army was waiting for because it was exhausted….

The comment is in sharp contrast to previous assessments that the Kremlin was sending poorly-trained men into battle after Vladimir Putin’s decree on September 21 for the mobilization.

However, in line with those assessments, Syrskyi said the Russians are using a lot of old equipment because it had no other way of replenishing supplies.

He also said that after weeks of trying to overrun the city of Bakhmut in the Donetsk region, the Russian forces have made only slow progress.

The Ukrainian military promotes its soldiers on the frontline:

Morning Pikachu Dance. Winter has never been an obstacle to a good mood.
🎥 by Operative #UAarmy pic.twitter.com/B5efM39lcT

Russian State media says three people have been killed and six injured after a fuel tanker exploded at an airfield southeast of Moscow, near the city of Ryazan.

Despite reports of some Russian troops withdrawing from settlements east of the Dnipro River in the Kherson regions, the Russians continue to shell recently-liberated areas — including Kherson city — on the west bank.

The Interior Ministry’s Anton Gerashchenko said a 65-year-old woman was killed when Russian troops fired machine guns as she and her husband were crossing the Dnipro in a boat.

As Ukrainians resist Russian missile strikes on energy infrastructure, President Volodymyr Zelenskiy has said, “To get through this winter, we have to help each other more than ever and care for each other even more. And please don’t ask if you can help, and how. Just help when you see you can.”

Zelenskiy explained in his nightly address to the nation:

Russia still has missiles and an advantage in artillery. Yes, but we have something that the occupier does not have and will not have. We defend our home, and that gives us the strongest motivation possible. We fight for freedom, and that always multiplies any force. We defend the truth, and this unites the whole world around Ukraine.

Russian Deputy Prime Minister Alexander Novak has postured against the price cap on Moscow’s seaborne oil, set by the European Union, the G7 countries, and Australia.

The cap has been set at $60 per barrel. Currently, Russia’s oil sells for about $52 per barrel.

However, Novak still betrayed concern as he said on Sunday:

We are working on mechanisms to prohibit the use of a price cap instrument, regardless of what level is set, because such interference could further destabilize the market.

We will sell oil and petroleum products only to those countries that will work with us under market conditions, even if we have to reduce production a little.

An official said a Kremlin decree is being prepared to prohibit Russian companies and traders from interacting with countries and companies who adopt the cap.

Vladimir Putin said in September that if price caps are imposed, Europe will be “frozen” like a wolf’s tail.

ORIGINAL ENTRY: UN member-states are considering a draft resolution for a tribunal to try Russian leaders for crimes of aggression in Ukraine.

Beth Van Schaack, the US Ambassador for Global Criminal Justice confirmed that Washington is open to Ukraine President Volodymyr Zelenskiy’s call for the tribunal:

It’s something that President Zelenskiy cares deeply about. This is something Ukraine wants, and I think that’s going to carry a lot of weight. The question is, will they have the votes at the General Assembly?

So far, all of the [General Assembly] resolutions on Ukraine have prevailed. The numbers have been quite strong.

The International Criminal Court is already investigating the commission of war crimes in Vladimir Putin’s invasion. Kyiv wants the international community to go farther, considering the prosecution of Russia’s leadership as well as individual troops and Russian officials culpable for the crimes.

The ICC does not have jurisdiction over Russia for “crimes of aggression”, as Moscow has not acceded to the relevant statute.

Van Schaack said two options are being considered for “a limited number of defendants, probably the top political leadership and maybe some top military actors as well”. With the backing of the General Assembly, the UN could sign a bilateral treaty with Ukraine for the tribunal. Alternatively, the European Union or Council of Europe, supported by a General Assembly vote, could bolster a Ukrainian domestic court.

On Wednesday, Ukraine First Lady Olena Zelenska addressed UK members of Parliament in person about the issue. The British Government has not set out its position so far.