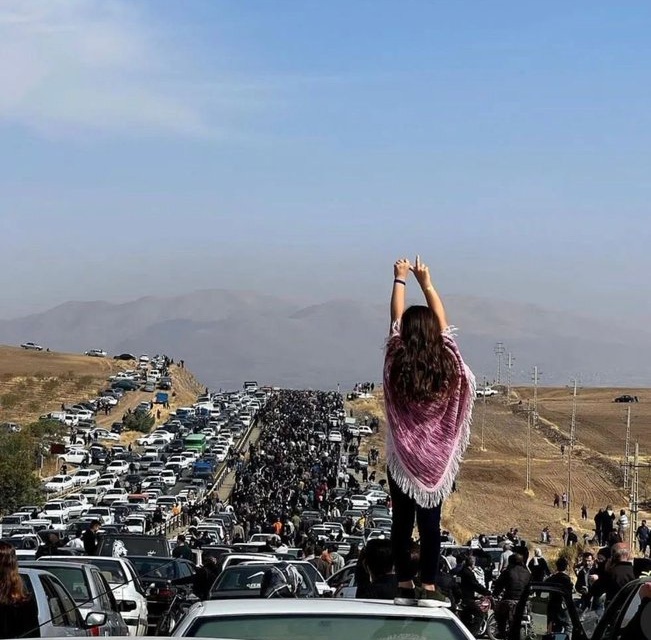 A woman stands on a car and salutes the crowd gathering for the 40th day ceremony for Mahsa Amini, who died in Iranian police custody on September 16

Iran Video: Why Protesters Risk Everything for Freedom

At least 40 filmmakers have been detained during nationwide protests, according to a member of the Committee to Follow Up on Situation of Arrested Artists.

Mehdi Kouhian said on Saturday that around 150 figures in Iranian cinema have been summoned, arrested, banned from leaving the country or persecuted in other ways by the regime.

Members of the CFUSAA met with a judiciary official last Wednesday to seek the release of detainees. Kouhian said the official had been “very optimistic that the current situation will change”; however, since then, another artist was arrested.

At least seven people have already been sentenced to death, and the Iranian judiciary says that more than 20 have been convicted or indicted on charges carrying the death penalty.

The figure of more than 80 comes from the recording of a recent meeting of the Coalition Council of Islamic Revolution Forces, a coalition of hardline and conservative parties.

The secretary of the Coalition, Reza Davari, spoke of those charged with “corruption on earth” or being a “mohareb” (“enemy of God”).

Davari said the Supreme Leader prefers executions, based on the principle of “qisas” (punishment in kind), for those convicted of the killing of Basij militiamen.

However, because that applied to only about 10 detainees, authorities decided on the “moharebeh” and “corruption on earth” charges.

The UN Special Rapporteur for Iran, Javaid Rehman, warned last week of the regime’s death penalties based on “vague and broadly formulated criminal offenses”, saying the campaign was likely to “intensify”.

Iran Foreign Minister Hossein Amir Abdollahian has presented a new rationale to dismiss nationwide protests and their calls for rights, justice, and accountability.

Amir Abdollahian declared that the protests were incited by the US and other Western countries”to force Iran to make big concessions at the negotiating table” over a renewal of the 2015 nuclear deal with the 5+1 Powers (US, UK, France, Germany, China, and Russia).

The talks have been stalled since March, primarily because of Iranian demands for sharp limits on inspections by the International Atomic Energy Agency. Meanwhile, Iran has stepped up production of 20% and now 60% uranium, breaking the terms of the 2015 agreement.

After IAEA Resolution Over Its Non-Compliance, Iran Steps Up Production of 60% Uranium

Amir Abdollahian insisted Iran is a democratic country, “We hear and respond to the peaceful demands of the noble Iranian people on various issues but we do not allow anyone to [incite] riots and acts of terror in our country.”

Iranian authorities have demolished the home of Elnaz Rekabi, who competed in the Asian climbing championships in South Korea in October without a hijab.

Rekabi’s family announced the demolition of the villa. An “informed source” said they were fined 168 billion rials ($4,700).

Rekabi appeared without a headscarf as protests grew over compulsory hijab and the death of Mahsa Amini after she was detained and reportedly beaten by “morality police” over “inappropriate attire”.

Reportedly under pressure from authorities, she recanted on Instagram, “Due to poor scheduling and an unexpected call for me to climb….I inadvertently had a problem with my cover.” She also appeared, head covered, in a photo with Iran’s Sports Minister.

After video of the demolition appeared online, Iranian officials claimed that they destroyed a building in the garden of the Rekabi home because it did not have planning permission.

Iranian authorities have executed four people and imposed prison sentences to three others accused of working with Israeli intelligence.

The judiciary claimed they received instructions from a Sweden-based operative of Israel’s Mossad intelligenc service. They were supposedly paid in cryptocurrencies and bought weapons and equipment while receiving training on how to destroy evidence, evade security cameras, and swap vehicles.

Three detainees were given prison sentences of 5 to 10 years for “committing crimes against national security, being accessories in kidnappings, and possession of firearms”.

Iran Attorney General Mohammad Jafar Montazeri declared on Saturday that “both Parliament and the judiciary are working” on compulsory hijab, a central issue sparking nationwide protests now in their 12th week.

Montazeri did not specify what changes may be made in the law requiring women to cover their heads in public. He said the review team met with Parliament’s Cultural Commission with “the results in a week or two”.

President Ebrahim Raisi said on Saturday that the restrictions on women’s rights are “constitutionally entrenched” but hinted, “There are methods of implementing the constitution that can be flexible.”

Beyond the issue of hijab, Montazeri continued the regime’s denigration of the protests as a “war” by the “enemy” with “powerful think tanks and coordination between England, usurping Israel, America, and several other countries”.

Parliament Speaker Mohammad Baqer Qalibaf rejected any significant reforms, telling a conference on Saturday: “The enemy’s main goal was to undermine the principles of the Constitution….In the discussions for a new governance, our focus should be on implementing the constitution and not on changing its provisions.”

Activists say Mina Yaghoubi, freed after a month in detention, has returned with signs of being beaten.

Cruel! #MinaYaghoubi, 33, from the city of Arak, was arrested on Nov 1, & released on bail yesterday. Her family & friends welcome her home with admiration. “We are all proud of you.”The bruises tell us how she was treated in detention. #MahsaAmini #مهسا_امینی #IranRevolution pic.twitter.com/5TMTSM3bsu

Protests have resurged today in Zahedan in Sistan and Baluchestan Province in southeastern Iran.

Zahedan, where Iran’s leader Sunni cleric Molavi Abdul Hamid, is one of the centers of the 11-week protests. More than 100 people have been killed in and near the city by security forces.

Mass protests against the Iranian regime after Friday prayers today in the ethnic Baluch city of Zahedan. For what appears to be the first time, women in the very traditional part of the country come out in larger numbers. Videos via Telegram. pic.twitter.com/ySGWe2AYi7

“With or without the hijab, we’re moving towards a revolution,” female protesters chant in Zahedan in Sistan-Baluchistan, scene of a deadly state crackdown.#MahsaAmini pic.twitter.com/BZJXGAPRH4