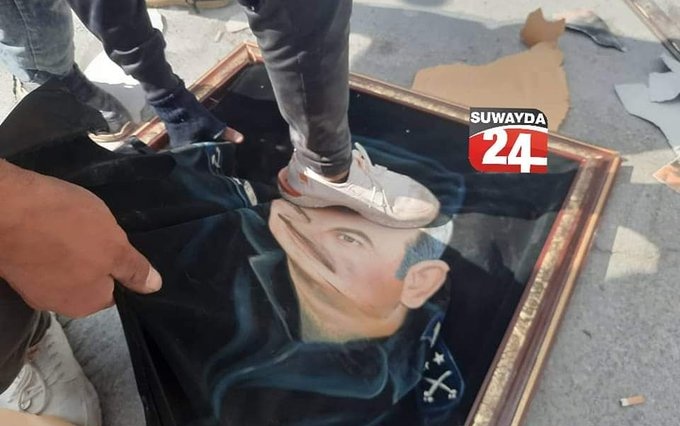 Protests resurged on Sunday against the Assad regime in the mainly-Druze Suwayda Province in southern Syria.

Crowds rallied in Suwayda city over political and economic conditions, chanting against the regime, tearing down posters of Bashar al-Assad, and burning the flag of Russia, the regime’s essential backer. When security forces arrived, the demonstrators refused to disperse.

Syria: this is how Assad's Intelligence was welcomed by people protesting against poor-living conditions in center of Suwayda-city this morning. pic.twitter.com/9LJnIoZHof

Security forces then resorted to gunfire, reportedly killing at least one people and injuring seven. Some in the crowd burnt the regime’s provincial building, and a sniper shot and killed a police officer.

There have been recurrent protests for years in Suwayda, near the border over Jordan, amid the Syrian uprising. Residents have challenged forced conscription and pro-regime militias, and demonstrations have been fed by Syria’s economic crisis.

In February, rallies criticized the regime over subsidy cuts and rising prices, notably of fuel. In late July, local groups expelled the Dawn Forces militia from its headquarters and killed several kidnapped militiamen.

Syria’s English-language State media are silent about Sunday’s events. However, Druze legislator Nashaat al-Atrash appeared on the regime-linked Al-Ikhbaria TV to condemn the attack on the provincial headquarters and call for an end to protests.

“All of Syria is going through an economic crisis,” he said.

Big & unprecedented moment for #Suwayda, as locals tear down #Assad’s portrait on the provincial Ba’ath HQ, amid demonstrations against the cost of living.

Protesters have since been shot — 1+ dead until now. Multiple SAA vehicles set on fire.pic.twitter.com/sh5jtUxrdd