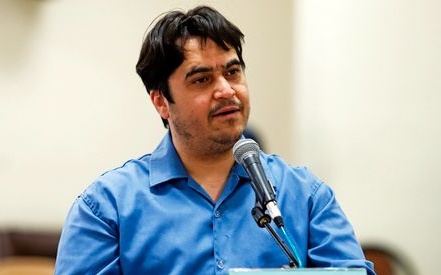 In a Monday press conference, Rouhani responded to international criticism of Saturday’s hanging. He said European countries “have the right to comment, but Zam was executed upon a court’s ruling”.

The President maintained that Iran’s judiciary is independent, and asserted, “I think it’s unlikely that this will hurt Iran-Europe relations.”

Stung by international criticism of their execution of journalist Ruhollah Zam, Iranian authorities have summoned the German and French Ambassadors in Tehran.

The Foreign Ministry chided the envoys, presenting Zam as a “terrorist”: “It is a historic tragedy in which Europe divides terrorism into good terrorism and bad terrorism based on its own interests and uses it selectively.”

A Ministry spokesman accused of providing financial and moral support to “terrorist elements and groups who have committed criminal security measures against the Iranian nation in cooperation with Western intelligence services and the Zionist regime”.

Through his Amad News site, Zam supported nationwide protests over economic conditions in 2017.

But Iranian officials say the support was “terrorism”, citing the messaging app Telegram’s suspension of the site for advocacy of the use of Molotov cocktails against security forces.

The Ministry spokesman asked under “what standard” of journalism is “training to make incendiary bombs, planning street clashes, and cooperating with foreign governments and intelligence services with the aim of overthrowing Iran’s political system and aiding and abetting armed criminal acts”.

The Committee to Protect Journalists posted a far different view, “With the execution of Ruhollah Zam, Iran authorities join the company of criminal gangs and violent extremists who silence journalists by murdering them.”

The office of the Tehran Prosecutor General announced Zam’s hanging on Saturday morning. Earlier this week, the Supreme Court had upheld the death sentence, despite international condemnation of the “grossly unfair” trial and verdict.

Zam, who founded Amad (Awareness, Struggle, and Democracy) News, supported protests from exile in Paris, using the messaging app Telegram for his site. Telegram suspended the channel in 2018, but it continued under a different name.

He was reportedly abducted by Iranian agents in Iraq last October. The Revolutionary Guards declared that the journalist was “led” by the French intelligence service and supported by American, Israeli, and other intelligence agencies.

Zam was convicted of “corruption on Earth”, a charge used to justify execution, and condemned to death in July. He appeared on State TV to “confess” and apology for his activities, saying Amad News sought to overthrow the Islamic Republic.

The nationwide demonstrations in 2017 were sparked by a rise in food prices. Amad News featured videos of crowds chanting against President Hassan Rouhani and the Supreme Leader.

The rallies were suppressed, with reports of 25 people killed and 5,000 detained. However, they revived in November 2019, a month after Zam’s abduction, when the Government suddenly increased the cost of gasoline. Amnesty International detailed the killing of at least 304 protesters, while Iranian officials spoke of the deaths of 1,500 people — demonstrators, members of Iranian security forces, and bystanders.

Zam was the son of prominent cleric Mohammad Ali Zam, a reformist who was in the Government in the early 1980s. In a letter published by Iranian media in July 2017, the cleric said he did not support his son’s activities.