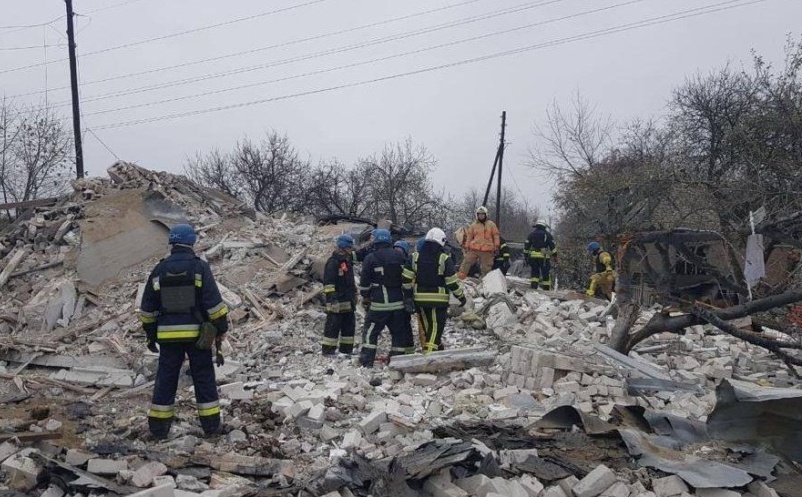 EA on Dublin NewsTalk: NATO and Collective Defense During the Ukraine War

Thursday’s Coverage: Have Ukrainians Struck Another Russian Airbase in Crimea?

Swedish prosecutor Mats Ljungqvist, leading the investigation into blasts in late September that damaged the Nord Stream 1 and 2 gas pipelines from Russia to Germany, has confirmed that the cause was sabotage.

Ljungqvist said of the examination of the Baltic Sea site, “Analysis that has now been carried out shows traces of explosives on several of the foreign objects that were found.”

He did not name any suspects. Western intelligence services have assessed that Russia probably carried out the attack.

The death toll in the Zaporizhzhia region from Thursday’s Russian strikes has risen to nine, with the discovery of two more bodies.

House of culture in the Zaporizhzhia region.
Another russian missile strike.
Today, the "great russian culture" generates only death and destruction.
📷 by the Head of Zaporizhia Regional Military Administration. pic.twitter.com/rtEd7Wz7RU

The mayor of Lviv in western Ukraine, Andruy Sadovy, posts that from 8 a.m. “power supply has been restored to almost the entire city and that water supply and heating were restored. The water is hot and cold.”

Russia’s latest attacks across the Donetsk region in eastern Ukraine have killed one person and injured four.

The attacks were the sixth wave since October 10, targeting energy infrastructure and other civilian sites.

Targets included critical infrastructure in Dnipro in south-central Ukraine and the Black Sea port city of Odesa. In Dnipro city, 14 people including a teenager were injured, and another five hurt in the region. In Odesa, three people were wounded.

Air defenses were also active, downing many of the incoming Russian missiles and drones, in the Kyiv, Mykolaiv, Kharkiv, Cherkasy, and Poltava regions. The head of the Mykolaiv region, Vitaly Kim, posted on Telegram, “Crooked, toothless, miserable petty thieves – all you need to know about the Russian army.”

Russia is continuing the strikes despite intelligence that its missile stocks are running low. On Tuesday, it carried out the largest assault of its 8 1/2-month invasion by firing about 100 cruise missiles, 85 of which were downed.

In his nightly address to the nation, Ukraine President Volodymyr Zelenskiy said that about 10 million people — around 1/4 of Ukraine’s population — were without power. He assured, “We are doing everything to restore electricity – both generation and supply.”

He said meetings with allied countries at the US airbase in Ramstein, Germany discussed “the strengthening of our anti-aircraft and anti-missile defense”.

We repeat to our partners again and again that only full protection of the Ukrainian sky will protect both Ukraine and Europe from many possible escalations of Russian aggression and will definitely encourage Russia to truly end the war.

This is a naive tactic of cowardly losers that we are ready for.

Ukraine has already withstood extremely difficult blows of the enemy, which did not have the results that these Russian cowards were counting on. We continue to move forward.

Kremlin spokesman Dmitry Peskov insisted, “The unwillingness of the Ukrainian side to settle the problem, to start negotiations, its refusal to seek common ground, this is their consequence.”

Vladimir Putin has not made a substantial comment on the situation since Russian forces withdrew from Kherson city in southern Ukraine last Friday, in a major symbolic and strategic loss for his invasion.