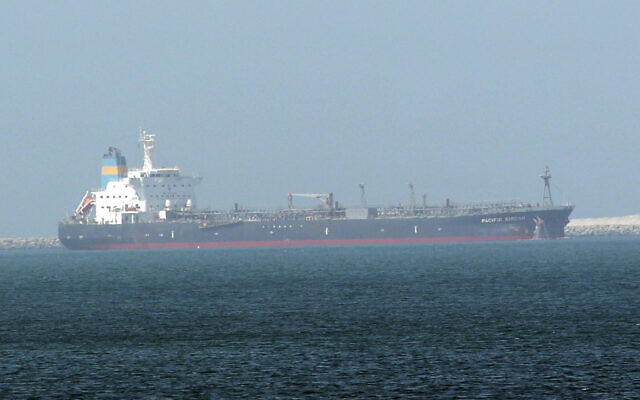 A “Western official” says the Shahed-136 drone that attacked the Pacific Zircon oil tanker was launched from a Revolutionary Guards’ Air Force regional command in Chabahar in southeastern Iran.

An “Israeli defense source” told Army Radio that the drone was launched from inside Iran: “The Iranians are no longer hiding behind their proxies. They have made a mistake and will not be able to evade [blame] for the action.”

Iranian officials privately confirmed the attack with the Shahed-136.

ORIGINAL ENTRY: Iran’s military has carried out a drone attack on an oil tanker owned by Israeli billionaire Idan Ofer, according to US and Israeli officials.

The Liberian-flagged Pacific Zircon was bombed by a drone about 150 miles off the coast of Oman on Tuesday night.

The vessel belongs to Singapore-based Eastern Pacific Shipping, which is owned by Ofer. The company said there was minor damage to the tanker, but no spillage of oil and “all crew are safe and accounted for”.

There was no claim of responsibility for the attack. However, Gen. Michael Erik Kurilla, the head of the US Central Command, said, “This unmanned aerial vehicle attack against a civilian vessel in this critical maritime strait demonstrates, once again, the destabilizing nature of Iranian malign activity in the region.”

An Israeli official said it appeared Iran used a Shahed-136 exploding drone, which Tehran has also supplied to Russia for attacks on energy infrastructure and civilian targets ins Ukraine.

“It is an Iranian attack, there is a consensus on this in the Israeli intelligence and defense community,” the official said.

Iran’s Revolutionary Guards have carried out a series of attacks and detentions of ships in the Persian Gulf in recent years.