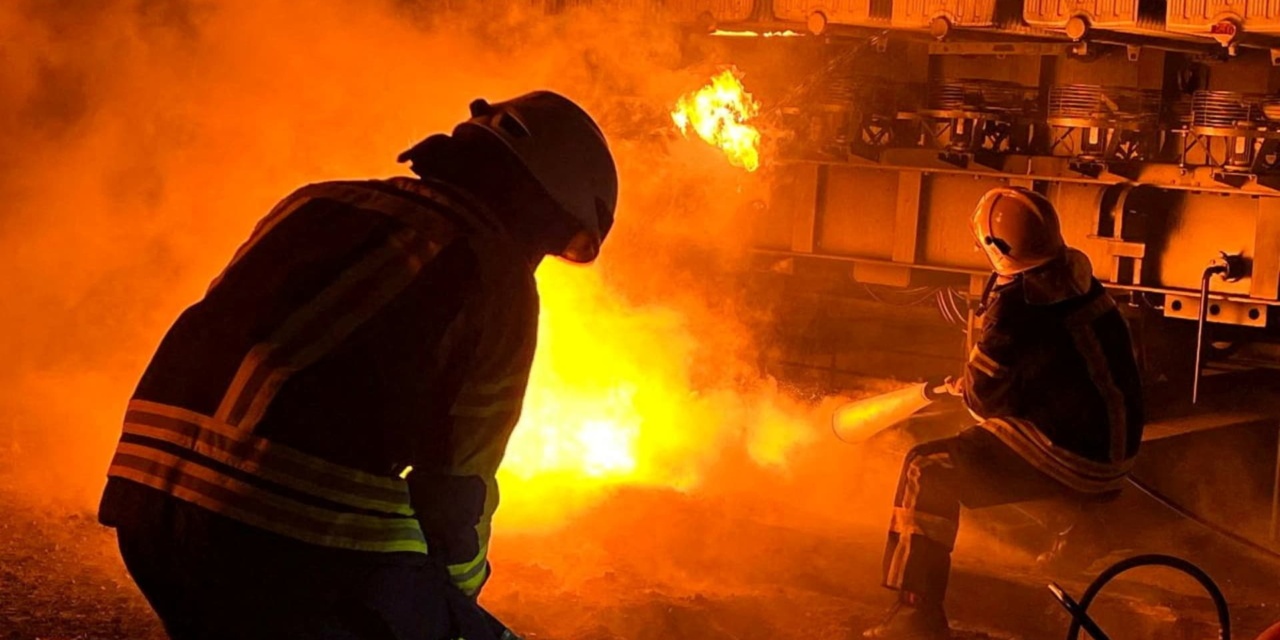 Firefighters try to extinguish a blaze after a Russian missile strike on Kyiv, Ukraine, November 15, 2022 (CNBC)

The head of Ukraine’s largest private energy company says Ukrainians should consider temporary stays outside the country to help save energy.

If they can find an alternative place to stay for another three or four months, it will be very helpful to the system….

If you consume less, then hospitals with injured soldiers will have guaranteed power supply. This is how it can be explained that by consuming less or leaving, they also contribute to other people.

Officials emphasized that they are still verifying more casualties, particularly from zones of active fighting, liberated areas, and Russian-occupied territory.

The first train from liberated Kherson to Kyiv (see 0828 GMT) has arrived in the capital:

The first train coming to Kherson from Kyiv following the liberation day.
Note it how local folks are meeting it! pic.twitter.com/9I9RrDG0ec

The liberated city of Kherson in southern Ukraine has been reconnected to the capital Kyiv by rail.

The first train since Russia’s February 24 invasion left with 200 passengers on an 11-hour journey on Friday night. People on the platform cheered as loudspeakers played rock music.

Presidential advisor Kyrylo Tymoshenko, a senior official in the president’s office, wrote, “This is our victory train! Like this train, we will return to Kherson everything for a normal life!”

At least six civilians were killed and six wounded in southern Ukraine by Russian attacks on Friday.The death toll from a Russian rocket attack on a residential building in the city of Vilniansk on Thursday has risen to 10, including three children.

ORIGINAL ENTRY: The Ukraine Government acknowledged on Friday that almost half of the country’s energy system has been knocked out by Russia’s series of missile, drone, and rocket attacks.

Unfortunately Russia continues to carry out missile strikes on Ukraine’s civilian and critical infrastructure. Almost half of our energy system is disabled.

Mykola Povoroznyk, deputy head of the Kyiv city administration, said in a televised statement, “We are preparing for different scenarios, including a complete shutdown.”

Kyiv Mayor Vitaly Klitschko said 1.5 million to 2 million people – about half of the city’s population – were suffering periodic blackouts as authorities moved power from one district to another.

Facing defeats in eastern and southern Ukraine, Russian forces escalated aerial assaults on energy infrastructure on October 10. Since then, there have been six waves of strikes.

Last Tuesday, Russia fired almost 100 cruise missiles in the largest attack since its February 24 invasion. It followed up on Thursday with scores of missiles, rockets, and drones.

Although Ukraine’s air defenses have knocked out most of the incoming missiles — 85 were downed on Tuesday — those which have landed have caused widespread damage.

Ukraine President Volodymyr Zelenskiy said on Thursday night that about 10 million people — around 1/4 of Ukraine’s population — were without power. He assured, “We are doing everything to restore electricity – both generation and supply.”

We understand that the enemy wants to destroy our power system in general, to cause long outages. We need to prepare for possible long outages, but at the moment we are introducing schedules that are planned and will do everything to ensure that the outages are not very long.