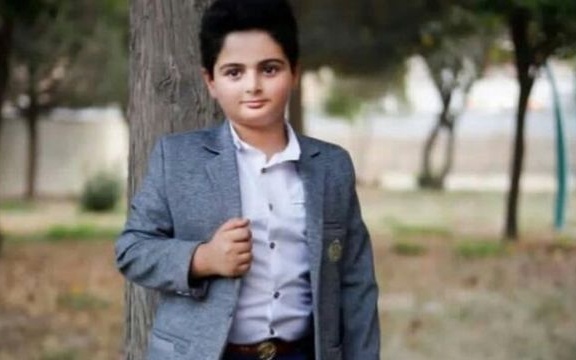 There are more protests across Kurdistan in northwest Iran on Saturday.

A banner of Kian Pirfalak, a 9-year-old boy killed by Iranian security forces on Wednesday, hangs over a Tehran highway with the inscription “child-killing government”.

At Kian’s funeral on Friday, his mother Zeynab Molaeirad told mourners, “Don’t let them tell you this was a terrorist attack. The police killed my son.” (see below).

The boy and his father were slain as they sat in a car in Izeh in Khuzestan Province. They were among several people killed, with the Iranian regime trying to blame “gunmen” rather than accepting responsibility.

Moleirad addressed Iranian officials on Instagram, “Damn you! How could you? He was only 9. [You] filthy Islamic republic.”

Video of Thursday night’s fire at the ancestral home of the late Ayatollah Khomeini, the founder of the Islamic Republic, in Khomein in western Iran:

The semi-official Tasnim News Agency denied there was a blaze, insisting that the “door of the historic house is open to visitors”.

The deputy governor of Markazi Province, Behnam Nazari, asserted, “The counter-revolutionary media tries to create turmoil by spreading lies and false information. The burning down of Imam Khomeini’s historic house, a place with spiritual value to Iranians, was one of those lies.”

Regime personnel chase mourners at the funeral of a student killed during nationwide protests.

Another Friday of protests in Zahedan in southeast Iran — crowds shout, “Death to the Dictator”:

Zahedan’s Friday Prayer Leader, the leading Sunni cleric Molavi Abdul Hamid, maintained his challenge to Iranian officials. He said of last week’s meeting with a regime delegation which tried to stem his criticism, “We neither accept threats nor bribery….Even if everyone gives us the earth, we will not deviate from the truth and the right path.”

Claimed video of the home of the late Ayatollah Khomeini, the founder of the Islamic Republic, set on fire in the city of Khomein on Thursday night:

The mother of Kian Pirfalak, the 9-year-old boy killed on Wednesday by Iranian security forces in Izeh in southwest Iran, tells mourners at his funeral, “Don’t let them tell you this was a terrorist attack. The police killed my son.”

She recites a children’s poem, then the crowd condemns the regime and the Supreme Leader.

Before joining protests this week, Hamid-Reza Rouhi, 20, wrote on Instagram, “If they cut off the Internet forever, I want this to be last post: Long live woman. Long live freedom. Long live Iran.”

He was killed in Tehran on Thursday, reportedly by regime gunmen.

One protester was killed in Bukan and two in Sanandaj, where mourners were remembering four other slain demonstrators on the 40th day of their deaths.

In the village of Masal, also in Gilan Province:

The shuttered shops during a strike in Sari in northern Iran:

The closed Iron Bazaar in Tehran:

Marzieh Yousefzadeh, 26, has reportedly been given a 15-year-sentence for holding a banner with the name of Mahsa Amini, the young woman whose death in police custody triggered the protests across Iran.

Yousefzadeh was arrested in Tehran on September 19. She is held in Qarchak Prison, known for its harsh conditions, outside the capital.

A tribute to the 9-year-old boy killed by Iranian security forces in Izeh in Khuzestan Province on Wednesday night:

A beautiful tribute to 9-year-old Kian Pirfalak who was killed on Nov 16 in the southern city of Izeh in Khuzestan. His relatives have blamed security forces for his killing. His father has been reportedly wounded in the attack. RIP#کیان_پیرفلک pic.twitter.com/sRgirrWeAW

Before joining protests on Wednesday, Mohammad Hasanzadeh, a 28-year-old Iranian Kurd, posted on Instagram: “Today could be the last day of my life, for the well-being of the nation.”

Trying to prevent the arrest of a woman, he was stabbed and killed by a Basij militiaman.

At his funeral his grieving father makes an amazing speech. “We used to refer to someone with ethics, courage and conscience as ‘very manly’. But now, if a man wants to be a man, he must be able to be very womanly.” pic.twitter.com/3UvXuwSEAC

Lawyer and rights activist Hassan Asadi Zeidabadi is the latest attorney to be arrested during the current nationwide protests.

Zeidabadi’s wife Atefeh Khalafi said the attorney was seized on Wednesdayby the intelligence branch of the Revolutionary Guards.

Speaking at the G20 summit in Indonesia on Wednesday, Macron said, “Something that has changed is this revolution of women, young people of Iran, defending universal values like gender equality. It’s important to commend the courage and legitimacy of this fight.”

The Iranian regime has now imprisoned at least seven French nationals, including some recently seized. Interior Minister Ahmad Vahidi declared, “People of other nationalities were arrested in the riots, some of whom played a big role. There were elements from the French intelligence agency and they will be dealt with according to the law.”

Iran’s security forces have killed more protesters as demonstrations, in their ninth week, surge throughout the country.

In Izeh in Khuzestan in southern Iran, the victims included a nine-year-old boy and his father. State news agencies tried to avoid responsibility by blaming “terrorists” on motorcycles, saying two Basij militiamen were killed and 10 injured.

There were also fatalities in Isfahan and in Kurdistan, the starting point for the demonstrations sparked by compulsory hijab and the death of Mahsa Amini in police custody on September 16.

The Human Rights Activist News Agency says the death toll during the protests is now 348.

Teenager Daniel Pabandi was killed by Iran regime yesterday in Mahsa Amina’s hometown of Saqqez. At his funeral today, his friends and family don’t sound like they are grieving. They sound like they’re preparing for war. pic.twitter.com/tmrs3LsJSa

Strikes continue across the country, including in Tehran’s Grand Bazaar. Security forces tried to disperse merchants on Wednesday, and regime media insisted that there was no enthusiasm for the walkout.

At least five protesters have now been sentenced to death by the regime’s courts.

Strikes continue across Iran’s cities on Wednesday. Video from Arak, southwest of Tehran:

The Naziabad district in Tehran:

Steelworkers in Isfahan have also stopped working for a second day, and security forces have reportedly used tear gas on striking merchants in Tehran’s Grand Bazaar.

Protesters hacked the local alarm system in Tehran on Tuesday night to announce:

This is a red alert. Cruelty is rampant. If you don’t protest and strike today, darkness will come to your home. The time of the revolution has come.”

ORIGINAL ENTRY: Now in their ninth week, protests resurged across Iran on Tuesday.

The demonstrations began over compulsory hijab and the death of Mahsa Amini in police custody after she was detained and reportedly beaten for “inappropriate attire”. They have expanded their calls for rights and justice, including over the killing of hundreds of people and detention of more than 14,000 by Iranian security forces.

Crowds responded to the call of activists for three days of rallies from Tuesday, remembering those killed by security forces during protests in November 2019.

In Tehran, demonstrators chanted, “Freedom, freedom”, as drivers honked their car horns. Other marchers shouted about the Supreme Leader, “Death to the Dictator” and “This year is the year of blood, Seyed Ali will be toppled.” From Bandar Abbas in the south to Shiraz in south-central Iran, women waved headscarves about their heads.

The Kurdish human rights group Hengaw said at least two people were killed by security forces during protests across Iranian Kurdistan in the northwest of the country.

“The government forces have directly opened fire in most of the cities where uprisings have taken place, such as Sanandaj, Kamyaran and Kermanshah,” Hengaw said. The group is trying to confirm if there were other killings.

Fouladshahr in Isfahan Province with chants of “Death to Mojtaba [Khamenei]!”, the son of the Supreme Leader:

Meanwhile, the UN Office of the High Commissioner for Human Rights called on Iran’s officials to immediately release thousands of people who have been detained and threatened with execution by Iranian MPs.

“Instead of opening space for dialogue on legitimate grievances, the authorities are responding to unprecedented protests with increasing harshness,” OCHCR spokesperson Jeremy Laurence said.