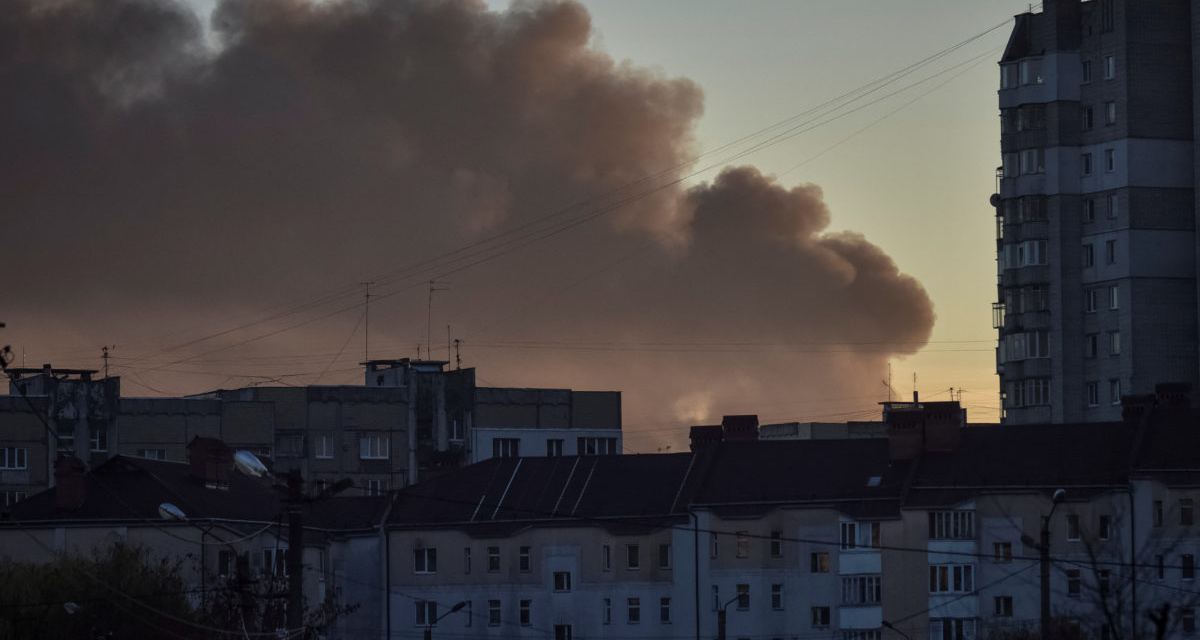 I cannot disclose the details, but I can assure you that the Ukrainian side continues to take the most drastic measures to prevent the use of Iranian weapons by Russia for the war against Ukraine….

Ukraine has informed Iran that the consequences of complicity in the Russian aggression will be incommensurable with the potential benefits of cooperation with Russia.

Russia has used more than 300 Iranian Shahed-136 drones in its attacks. While most have been downed by Ukraine air defenses, “swarms” have been successful in damaging infrastructure.

Iranian Foreign Minister Hossein Amir-Abdollahian finally acknowledged earlier this month that Tehran has supplied drones to Russia, but insisted it was months before Moscow’s invasion.

Japan is providing $2.57 million of generators and solar lanterns to Ukraine.

The large-scale blackout has occurred in various areas of Ukraine caused by destruction of a large part of energy infrastructure facilities.

While the winter gets colder and days get shorter every day in Ukraine, the aid has significant importance as winterisation support for those who cannot use heating facilities and lighting equipment due to the blackout.

The head of Ukraine State energy company Ukrenergo has spoken about the “colossal” damage from Russian strikes.

Volodymyr Kudrytskyi said almost no thermal or hydroelectric station has escaped the assaults, which have escalated since October 10.

“In Ukraine there is a power generation deficit. We cannot generate as much energy as consumers can use,” he explained.

Kudrytskyi said Ukrainians may face long power outages. However, he pushed back on comments by Ukrainian officials, including Deputy Prime Minister, Iryna Vereshchuk, that residents should be evacuated from the recently-liberated areas of the Kherson and Mykolaiv regions in southern Ukraine (see Original Entry).

The European Union has delivered another 2.5 billion euros ($2.57 billion) in financial assistance to Ukraine.

European Commission President Ursula von der Leyen said 18 billion euros ($18.47 billion) will be provided in 2023 for reconstruction and to ensure that Kyiv can provide public services and sustain its budget.

The @EU_Commission is disbursing a further €2.5 billion for Ukraine.

We are planning €18 billion for 2023, with funding disbursed regularly.

For urgent repairs and fast recovery leading to a successful reconstruction.

We will keep on supporting 🇺🇦 for as long as it takes. pic.twitter.com/X2bVI5PKe9

🇺🇦 received another tranche of #EU macro-fin aid worth €2.5 billion. A strong contribution to the stability of 🇺🇦 on the eve of a difficult winter. Grateful to the EU & @vonderleyen for solidarity and support. Waiting for the approval of €18 billion macro-fin program for 2023.

Russia shelled an aid distribution center in the town of Orihiv in southeastern Ukraine on Tuesday, killing a volunteer and wounding two women, according to Zaporizhia Governor Oleksander Starukh.

Orihiv is in Ukraine-controlled territory about 70 miles east of the site of the Russian-occupied Zaporizhzhia Nuclear Power Plant.

The UN Office of the High Commissioner for Human Rights confirms that at least 6,595 Ukrainian civilians have been killed and 10,189 injured during the Russian invasion.

Most of the casualties have been in the Donetsk and Luhansk regions in eastern Ukraine, with 3,939 civilians were killed and 5,338 injured.

The OHCHR said the actual toll is “considerably higher” because of a lack of information from Russian-occupied areas, some still held by the invaders.

The Kremlin has banned Russian media outlets from reporting on the relocation of Russia’s businesses abroad, according to several advertisers who were trying to present their services to relocating firms.

Between 700,000 and 1 million people are estimated to have fled Russia after Vladimir Putin announced a mass mobilization on September 2021. The Ministry of Economic Development reported in September that the labor force over the age of 15 decreased by 600,000.

The latest Russian attacks across the Donetsk region in eastern Ukraine have killed four civilians and injured four.

The fatalities were in Bakhmut, Heorhiivka, Kurakhove, and Petrivka.

Donetsk Governor Pavlo Kyrolenko posted that Avdiivka, a few miles from the frontline, suffered the most in the Donetsk direction: There were incoming hits overnight, and in the morning, there was massive shelling of the city center.”

He said there was also “massive shelling” in two areas near the strategic city of Lyman, liberated by Ukrainian forces in September.

Amid last weekend’s shelling of the Zaporizhzhia Nuclear Power Plant, Ukraine President Volodymyr Zelenskiy has repeated the call for a full Russian withdrawal from the complex.

Ukrainian officials say the latest shelling was to disable components needed to reactive two of the plant’s six dormant reactors. The International Atomic Energy Agency has warned that those responsible for the “powerful explosions” are “playing with fire”.

Today I spoke with French President Emmanuel Macron about the implementation of several points of our peace formula at once. Namely, about radiation safety and the situation at the Zaporizhia nuclear power plant, as well as about the energy security of Ukraine and Europe. We are working to ensure the implementation of the IAEA order to stop any hostile activity against Ukrainian nuclear facilities.

And for this, the demilitarization of the Zaporizhia nuclear power plant is extremely important. Russia must withdraw all its militants from there and stop shelling the plant.

UK military intelligence notes multiple reports, from both Russian and Ukrainian channels, of an attack on an oil terminal in Novorssiysk port on Russia’s Black Sea coast on Friday.

While awaiting confirmation, the analysts note that Russia’s Black Sea Fleet relocated many submarine operations to Novorssiysk after successful Ukrainian strikes on Russian bases in occupied Crimea this summer. The Russians will also be concerned about the threat to their flotilla of landing craft.

Any demonstration of a Ukrainian capability to threaten Novorssiysk will highly likely represent a further challenge for the BSF [Black Sea Fleet]. It would also further undermine Russia’s already reduced maritime influence in the Black Sea.

ORIGINAL ENTRY: Ukraine’s officials are preparing for blackouts until the end of March after Russian attacks that knocked out half of the energy grid.

The head of the private energy provider YASNO, Sergey Kovalenko, said workers are racing to make repairs before the onset of winter.

However, President Volodymyr Zelenskiy noted last weekend that 10 million Ukrainians — about 1/4 of the country’s population before the Russian invasion — were without power amid emergency and stabilization blackouts.

The basic scenario is that if there are no new attacks on the power grid, then under current conditions of electricity generation, the power deficit could be evenly distributed across the country. This means the outages will be everywhere but less lasting.

There are also different forecasts of the development of this situation, and they completely depend on attacks by Russia.

He continued, “Stock up on warm clothes, blankets, think about options that will help you wait a long outage. It’s better to do it now than to be miserable.”

On Monday, officials advised civilians to evacuate recently-liberated areas of the Kherson and Mykolaiv regions in southern Ukraine. The authorities fear that, despite efforts for reconstruction, the damage to infrastructure is too severe for some residents to endure a harsh winter.

Ukraine forces freed Kherson city, in a major symbolic and strategic victory, on November 11 after an 8-month Russian occupation.

Kyiv Mayor Vitaly Klitschko said last Friday, “Worst-case scenario. Actually, I don’t like to talk about that, but I have to be prepared if we [do not] have electricity, blackout, no water, no heating, no services and no communication.”

Ukraine is importing 8,500 generators per day to provide essential electricity in the event of protracted blackouts.