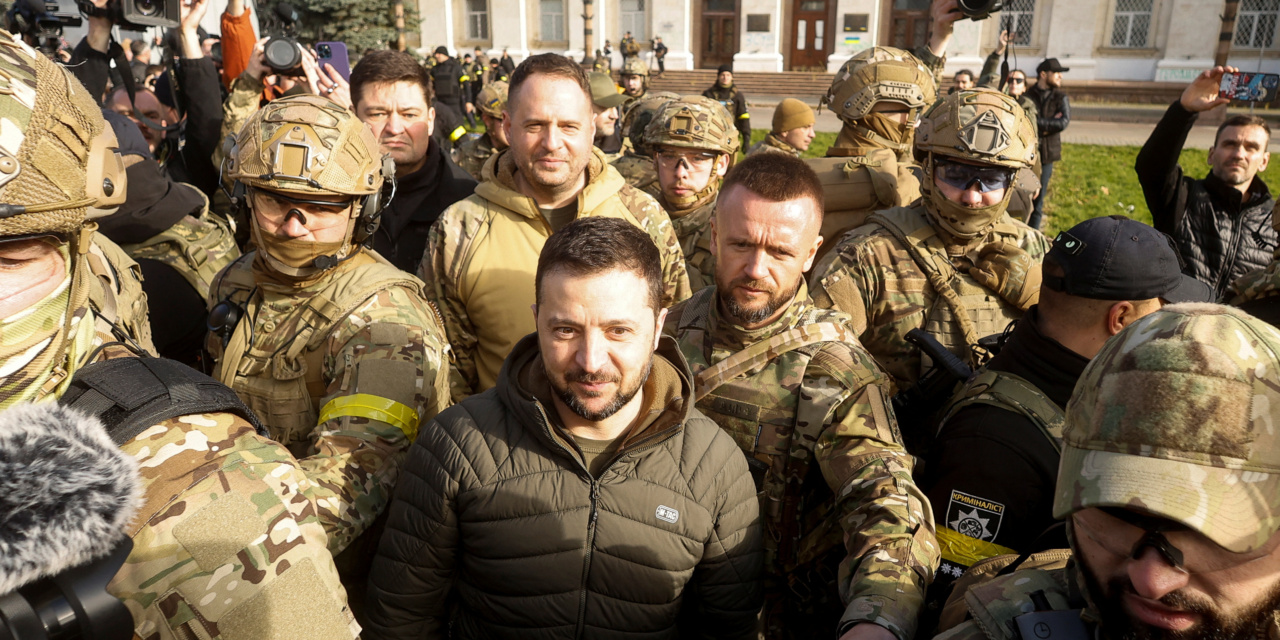 The US has sanctions 14 individuals and 28 entities involved in an international network procuring technology to support Russia’s invasion of Ukraine.

The sanctioned individuals include family members and financial associates of Russian oligarch Suleiman Kerimov. Among the companies are the Russian microelectronics firm Milander, which is part of Moscow’s military research and development organization.

Zambia is asking Russia how a Zambian citizen, serving a prison sentence in Moscow, was killed on a battlefield in Ukraine.

Russia notified Zambia about the death of the 23-year-old student in September. He had been in prison over an unspecified crime in April 2020.

Canada is providing another $500 million in military aid to Ukraine, and is adding 23 Russians to its sanctions list.

The sanctioned Russians are “involved in gross and systematic human rights violations against Russian opposition leaders”, according to the office of Prime Minister Justin Trudeau.

The Biden Administration has confirmed that CIA Director William Burns was in Turkey for discussions with Russian counterpart Nikolai Patrushev.

Amid reports that the Administration is pressing the Zelenskiy Government to welcome negotiations with the Kremlin, a National Security Council spokesperson emphasized that Burns and Patrushev will not address the resolution of Vladimir Putin’s invasion.

We have been very open about the fact that we have channels to communicate with Russia on managing risk, especially nuclear risk and risks to strategic stability. As part of this effort, Bill Burns is in Ankara today to meet with his Russian intelligence counterpart.

He is not discussing settlement of the war in Ukraine. He is conveying a message on the consequences of the use of nuclear weapons by Russia, and the risks of escalation to strategic stability. He will also raise the cases of unjustly detained US citizens.

A White House official said the Zelenskiy Government was briefed in advance about the visit.

Zelenskiy spent 30 minutes in the city, addressed troops in front of the administration building in the main square.

“We are moving forward,” he said. “We are ready for peace, peace for all our country.”

Parents with children gathered in the square. Some waved Ukrainian flags; others had thems draped over their shoulders.

Zelenskiy said, “I’m really happy, you can tell by the reaction of the people, their reaction is not staged. The people were waiting for the Ukrainian army, for our soldiers, for all of us.”

Official raising of Ukrainian flag in de-occupied Kherson during @ZelenskyyUa's visit to the city. pic.twitter.com/iQqeu0xPXj

The President thanked NATO and other allies. He noted that US-supplied HIMARS medium-range rocket systems had been vital in defeating the Russians.

Kremlin spokesman Dmitry Peskov grumbled, “We leave that without comments. You know it’s the territory of the Russian Federation”.

With his political and military influence rising, Yevgeny Prigozhin — a fixer for Vladimir Putin and the founder of the Wagner Group mercenaries — has called for the prosecution of St. Petersburg Governor Alexander Beglov.

Prigozhin asked the Russian Prosecutor General’s Office to open the case on the grounds that Beglov is connected with organized crime.

His demand came as the Wagner Group pushed back against pressure over its murder of a “traitor”. Russian nationalist military bloggers backed Prigozhin’s claim that the murder was justified.

The Biden Administration is recommending that Ukraine’s Zelenskiy Government should start thinking about “realistic” demands in negotiations with Russia — including a reconsideration of the aim of regaining Russian-occupied Crimea, according to “two European diplomats”.

US officials privately said earlier this month that Kyiv should publicly show a willingness to negotiate with Russia, despite Zelenskiy’s line that this is not possible while Vladimir Putin is still in power.

“People familiar with the discussions” said US National Security Advisor Jake Sullivan repeated the message to Zelenskiy in a meeting in Kyiv on November 4.

In televised interviews on Sunday, Sullivan maintained, “The United States is not pressuring Ukraine. We’re not insisting on things with Ukraine.”

A Russian landmine has killed a family of four, including an 11-year-old child, in the Kherson region.

The family’s car struck the landmine in the village of Novoraisk on Sunday.

The Russian destruction in the Kherson region could have been even greater.

As they retreated and demolished bridges on the Dnipro and Inhulets Rivers, Russian forces tried to blow up the Kakhovka Hydroelectric Dam.

Ukrainian authorities are assessing the damage to establish if the structural integrity of the reservoir is at risk.

The reservoir has a water volume of 18.2 cubic km (4.37 cubic miles). If the dam was breached, the flooding could displace hundreds of thousands of residents, including in Kherson city.

ORIGINAL ENTRY: Following the liberation of Kherson city in southern Ukraine, President Volodymyr Zelenskiy has condemned Russian war crimes against the people of the region.

Zelenskiy told the nation on Sunday night, “Investigators have already documented more than 400 Russian war crimes. Bodies of dead civilians and servicemen have been found. The Russian army left behind the same savagery it did in other regions of the country it entered.”

He reiterated that the occupiers “destroyed all the critical infrastructure: communications, water, heat, electricity”, setting the immense task of providing residents with the basics for survival as winter approaches. More than 2,000 unexploded mines and booby traps must be removed, with one sapper killed and four injured already during the demining operations.

But the President concluded with optimism, as he noted that 226 settlements — with a total of more than 100,000 residents — had been liberated in the Kherson region this month.

We are restoring communication, Internet, television. We are doing everything to restore normal technical capabilities for electricity and water supply as soon as possible.

It will be felt that there is life.

As Russia faced the end of its eight-month occupation of the region, troops looted cars, appliances, clothes, and other household goods. More than 15,000 exhibits were removed from Kherson’s art museum and taken south to Russian-occupied Crimea. So were statues; the bones of Grigory Potemkin, Catherine the Great’s friend and lover; and even the local zoo’s animals such as llamas, donkeys, wolves, squirrels, and raccoons.

Residents said dozens of schools, some used as bases by the invaders, were blown up to further disrupt education.

Utility companies said on Sunday that they are working round the clock to restore connections. Power may be back in northern Kherson as early as next week; however, it will take at least a month for restoration of electricity in Kherson city.

On Saturday, a Wi-Fi hotspot with a satellite dish was set up next to the city’s main bus station.

Kherson Governor Yaroslav Yanushevych, citing security issues, said authorities will maintain a curfew from 5 p.m. to 8 a.m. and will ban people from entering or leaving the city.

He said mobile phone connections could be back by Monday.

In his nightly address, Zelenskiy looked beyond the immediate task of Kherson’s recovery to the liberation of all of Ukraine. He pointed not only to regaining territory seized by Russia this year, but also to the Ukrainian flag over areas occupied by the Russians —- including the Crimea peninsula — since 2014.

We will definitely reach our state border – all sections of the internationally recognized border of Ukraine.