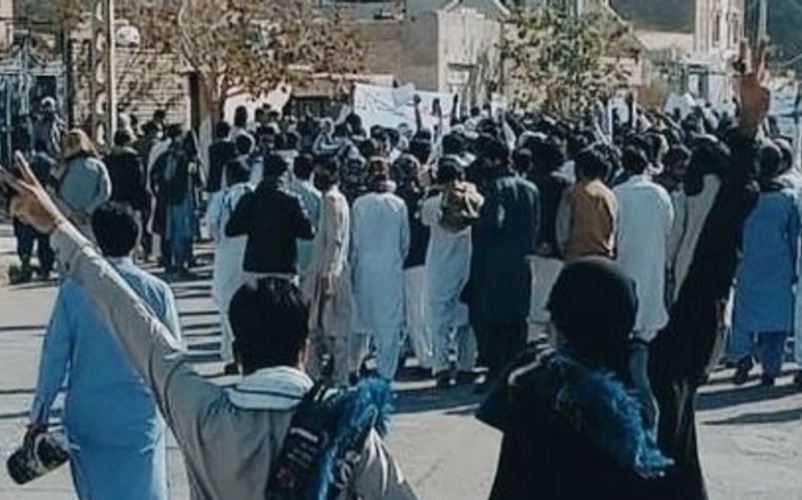 Iran Protests: The Man Killed by Security Forces for Honking His Horn

More actors, including Haleh Gorji, have expressed solidarity with protests by taking their headscraves in photos on social media.

Mohammad Khatami, Iran’s reformist President from 1997 to 2005, has finally issued a public comment about the nationwide protests.

Khatami said that “a regime change in Iran is neither possible or desirable” but “the continuation of the status quo is further increasing the grounds for a societal collapse any minute now”.

The regime has sharply limited Khatami’s ability to comment since the mass protests over the disputed 2009 Presidential election, ordering Iranian outlets not to publish his photo or to carry any of his remarks.

Students at the Qazvin Medical University in northwest Iran demonstrate for Hossein Ronaghi, a dissident blogger who is seriously ill in Tehran’s Evin Prison amid a 52-day hunger strike.

Imprisoned filmmakers Jafar Panahi and Mohammad Rasoulof warned in a statement on Saturday that Ronahi’s health is rapidly deteriorating and he is in danger of having a stroke.

Hundreds of people gathered outside a Tehran hospital, believing that Ronaghi was admitted there, and chanted, “Death to the Dictator”. They were surrounded by security forces.

Hundreds of security & plainclothes forces have surrounded Dey Hospital, where it’s reported that #HosseinRonaghi is transferred after post-hunger strikes complications in #EvinPrison. Many rushed to the streets near the hospital, concerned for his life. #MahsaAmini #حسین_رونقی pic.twitter.com/0rR4UfTOOo

The Iranian regime is trying to contain the country’s leading Sunni cleric, who has criticized the repression and killing of protesters.

Molavi Abdul Hamid, the Friday Prayer leader of Zahedan, has been more vocal after security forces killed more than 100 people in the Sistan and Baluchestan region in southeast Iran — including at least 66 worshippers and demonstrators on September 30. He said in Friday Prayers on October 21:

For what crime were they killed? Officials, the country’s managers, the Islamic Republic’s Supreme Leader who commands all armed forces are all responsible before God.

While Security forces have continued the crackdown and killing, including of several people in Khash just over a week ago, thousands of protesters turned out on Friday in Zahedan and other cities.

Akbari has called for harsh sentences for protesters, labelling them as “barbaric rioters”.

According to Iranian State media, he said “the Supreme Leader was saddened and concerned” and had ordered an investigation.

But there was no sign of accepting responsibility for the killings by security forces. Instead, Akbari declared, “There will be no appeasement with those who have harmed the national and provincial security and committed crimes, and they must be punished and tried because the society’s security is a red line for all governments.”

Abdol Hamid held his ground, saying the regime crackdown illustrates itsdiscrimination against the Iranian Sunni community. He criticized leaders for failing to condemn the violence of the security forces.

Monday’s attack on the city of Koye, near Iraqi Kurdistan’s capital Erbil, killed at least one person and injured 10.

The Iranian regime has blamed Kurdish parties for the nationwide protests triggered by the death of Mahsa Amini — a native and resident of Iranian Kurdistan — in police custody on September 16.

Switzerland has formally advised its citizens not to travel to Iran.

Iran’s judiciary has imposed a death sentence on one protester and punished five other with 5 to 10 years in prison.

The defendant condemned to death was sentenced for “disturbing public peace and order, assembly and conspiracy to commit a crime against national security, and corruption on earth”. He was accused of setting a government building on fire.

The five other defendants were charged with “assembly and collusion to commit crimes against national security and disruption of public order and peace.”

Iranian State media said the sentences can be appealed.

At a Tehran university on Saturday….

In the main lobby of Tehran University College of Social Sciences, on Nov. 12, singing “The Girl from the Land of the Sun” a new protest anthem. #MahsaAmini #مهسا_امینی pic.twitter.com/tx3EfjqpiF

Solidarity with a slain protester in northwest Iran:

Demonstration in front of the home of Himan Hamzeh, who was killed by state security forces on Friday, in the village of Biyouran, near Sardasht, West Azerbaijan Province. #MahsaAmini #مهسا_امینی pic.twitter.com/uJT7zIdRph

An Iranian man, Ashkan Mahmoodi Nejad, has posted a video explaining how police officers killed his wife Somayeh. In front of their 8-year-old child, she was taken out of a cab and killed with six bullets.

At least 326 people, including 43 children and 25 women, have been slain by security forces in eight weeks of protests, according to the Oslo-based Iran Human Rights.

An Iranian football team celebrates a goal by expressing solidarity with Baluch protesters in southeast Iran who have been killed or detained by security forces.

The regime’s personnel killed at least 66 worshippers and protesters on September 30, and they have slain more than 100 in the last six weeks.

Thousands of residents renewed protests in Sistan and Baluchestan Province in southeast Iran on Friday.

Security forces killed at least 66 people in the provincial capital Zahedan on September 30, and more than 100 people during the protests.

But killings and detentions have not halted the demonstrations.

A video showed thousands in Zahedan on Friday. In the town of Khash, where protesters were slain last week, a march trampled and broke a street sign with the name of the late Gen. Qassem Suleimani, the leader of the Revolutionary Guards’ Quds Force.

Nov. 11, Khash, Sistan-Baluchestan: people trampled upon and destroyed a sign naming a boulevard after Qasem Soleimani.#MahsaAmini#IranRevoIution2022pic.twitter.com/HjaBYFYv0u

The European Union will impose more sanctions on Iran over the regime’s crackdown on protests.

The EU’s panel of permanent representatives in Brussels approved measures affecting 31 individuals and entities, including senior representatives of the police and the Basij paramilitary force.

EU foreign ministers are expected to confirm the sanctions on Monday.

Another actor has expressed solidarity with protests by posting a photo of herself without hijab.

On Instagram, Shagaig Dehghan sarcastically jabbed at the regime, “Let me explain to you that my hijab fell off by mistake.”

Protests and sit-ins continue in at least 10 Iranian universities on Saturday, including Kharazmi in Karaj: the Science University in Mashhad; Hormozgan Medical University; and campuses in Tehran.

"This Is Our Last Message: We'll Rise Up If You Execute (Protesters)," students at Tehran's University of Science and Culture are heard chanting in their Saturday gathering. pic.twitter.com/iwFlsb69XF

Video is circulating which claims to be of another young woman shot and killed by security forces.

The victim was slain in Rasht in northern Iran.

Singing and dancing in the city 10 minutes before the security forces fired.

A banner in front of the Imam Ali Hospital in Karaj, where Armita Abbassi was taken and disappeared on September 30, “Venerable rotten Leader, where is Armita?”:

A rally in Iran’s second city Mashhad on Thursday night:

Another public act of defiance, this time from an Iranian athlete:

Archer Parmida Ghasemi removed her hejab during the closing ceremony of archery competition in Tehran while officials present and cheered by fans #MahsaAmini #مهسا_امینی pic.twitter.com/ykmmGLr708

A regime official is greeted by a challenging audience at Ferdowsi University in Iran’s second city Mashhad, “You’re lewd and rotten, I’m a free woman!”.

Two more actors, Khazar Masoumi and Donya Madani, have posted pictures of themselves without a head covering.

Cracking down on the Saudi-funded, London-based TV channel Iran International, Iranian authorities have arrested one of its employees and allegedly targeting two others for assassination.

Fars, the outlet of the Revolutionary Guards, claimed that the arrested employee had “carried out numerous activities and actions in slandering the Islamic Republic, inviting youth to riot and creating terror among the people”.

Iran International said it had been warned by London’s Metropolitan Police that two of its UK-Iranian nationals faced threats that “represent an imminent, credible and significant risk to their lives and those of their families”.

Italian national Alessia Piperno has been released from detention.

Piperno, 30, was seized in late September.

The conspirators, who today are like puppets in the hands of the enemy, should keep in mind that we will not allow the sacred blood of the martyrs to be trampled on.

We will stop them if they try to take to the streets….

If today the revolutionary community is not responding, it is because that is what the Supreme Leader has decided.

The day he gives the order to deal with them, they will have no place in our country.

Iran’s nationwide protests have been joined by one of the country’s leading actors, who posted an image of herself without a headscarf on Wednesday.

Kurdistan in northwest Iran was the starting point for the eight-week protests. It is the home of Mahsa Amini, the 22-year-old Kurdish woman whose death in police custody sparked the uprising. Security forces have killed scores of protesters across Kurdistan, but have failed to quash the gatherings.

Alidoosti is a star in films by Iranian director Asghar Farhadi, including The Salesman, winner of the Oscar for Best Foreign Language Film in 2017. She also features in the movie by acclaimed director Saeed Roustayi, Leila’s Brothers, which was shown at this year’s Cannes festival.

She pledged to remain in Iran at “any price”:

I am the one who stays here and I have no intention of leaving.

I will stay, I will halt working. I will stand by the families of prisoners and those killed. I will be their advocate.

Since the mass protests after the disputed 2009 Presidential election, Iranian authorities have tried to suppress any dissent by leading figures in the film industry.

Throughout this summer and autumn, the regime has detained a series of award-winning directors, including Jafar Panahi, Mohammad Rasoulof, and Mostafa al-Ahmad. Al-Ahmed was handed a 6-year, 4-month sentence last month.