Revealed: Assad Regime’s Mass Killing of 700+ Civilians in Darayya in 2012 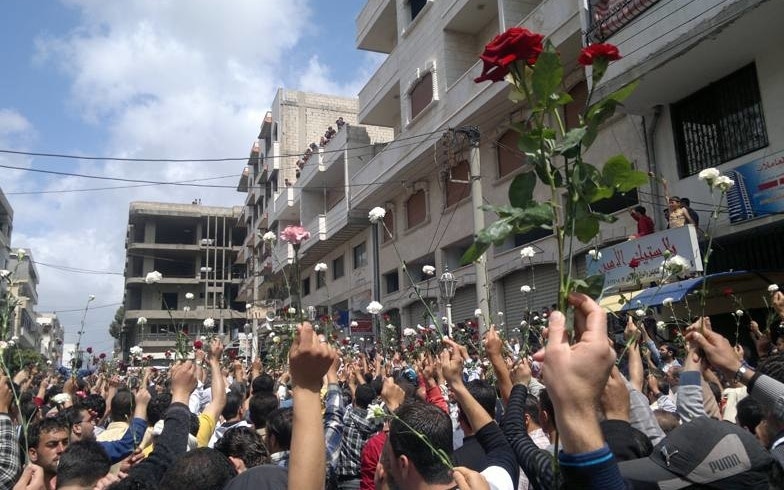 The “Roses Protest” in Darayya, southwest of Syria’s capital Damascus, in 2011

An investigation has established the scale of the Assad regime’s mass killing in the Damascus suburb of Darayya, with more than 700 men, women, and children massacred by regime forces from August 20 to 26, 2012.

The inquiry, sponsored by the Syrian British Consortium, collected evidence and testimonies from witnesses of the atrocities.

The Assad Government — including the Fourth Division, the Republican Guard, the Air Force Intelligence, shabiha [state sponsored militias] and supporting Hezbollah and Iranian militias — engaged in a systematic attack against the civilian population of Darayya.

Government and affiliated forces engaged in a massacre, killing men, women and children. Witnesses reported that individuals and entire families were rounded up before being shot and killed at close range in their homes and in building basements.

Of the victims, 514 have been identified by name, including 36 women and 63 children.

In one incident, 80 elderly men, women, and children were executed at the Al-Saqqa building. Between 44 and 56 civilians fleeing the town were stripped of their belongings and killed at the Zardeh intersection.

Assad’s forces shelled entire neighborhoods and deliberately targeted hospitals and schools “with rockets, missiles, and mortars, as well as helicopter and warplane airstrikes”. Troops carried out “a campaign of organized looting and destruction”. Entire stores were stripped, leaving people without food.

The regime, its Russian and Iranian backers, and sympathizers in other countries tried to cover up the mass killing. Journalists such as Robert Fisk of The Independent were brought to Darayya by Assad’s military and fed the story that “militants” had murdered civilians.

The regime finally overran and reoccupied the town in 2016.

The report emphasized that after a decade, the regime has yet to be held accountable. One witness, Sulaiman Alabbar, summarizes:

Healing can only start when the perpetrators of these crimes are brought to justice. Now, people can’t heal and they can’t go back home. Assad is still in power, still committing massacres with no consequences or repercussions.